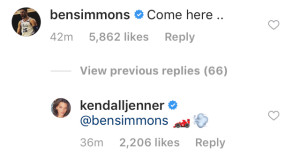 Heating up! Kendall Jenner and her ex Ben Simmons are continuing their social media flirtation.

The NBA player responded to several videos the model, 23, posted of herself being photographed in lingerie while crouching down on the ground on Instagram on Wednesday, January 9. “I do my own stunts,” she captioned the clips.

“Come here ..” the athlete, 22, wrote in the comments section of the post on Wednesday.

The Keeping Up With the Kardashians star answered right back, adding a race car emoji with steam coming out of the back. 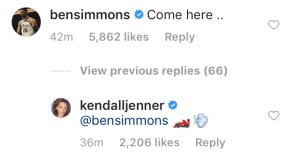 In December, the Philadelphia 76ers point guard left two drooling emojis on a stunning black-and-white picture the Vogue cover girl posted of herself on Instagram.

A source told Us Weekly in November that, despite their racy public exchanges, the former couple are not back together.

“They’re not exclusive and they’ll never be boyfriend [and] girlfriend, but they’re still having fun and hooking up,” the insider said. “Kendall likes hanging out with Ben – he’s funny and can relate to a lot of things that Kendall relates to. He’s in the spotlight and understands that they need to be on the down-low. He also travels and works as much as she does, so it works for them.”

76ers team co-owner Michael Rubin told Business Insider in December that he is a fan of their relationship, despite fans’ pleas on Change.org to ban the reality star from the Wells Fargo Center.

“I think Kendall’s awesome,” he told the publication. “I was with Kendall a few days ago, and Kendall insisted on going home and getting a good night’s sleep when Ben wanted to stay out for a late dinner. So Kendall’s been a great influence on him … We’ve won every game she’s been at but one so far.”

The Victoria’s Secret runway strutter split from Simmons in September after four months of dating.