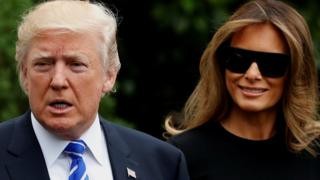 US President Donald Trump and First Lady Melania Trump are to skip an arts awards ceremony to allow those taking part “to celebrate without political distraction”, the White House says.

Some of those due to take part in the Kennedy Center Honors had said they would boycott the White House reception held before the awards ceremony.

The honours recognise the lifetime contributions of performing artists.

Many artists have been angered by Mr Trump’s plans to scrap funding.

In his budget outline in March, he pushed for the end of federal support for public broadcasting and the National Endowment for the Arts.

President Trump is also mired in controversy over his response to recent violence at a white supremacist rally in Virginia.

Republicans and Democrats alike have criticised him for insisting that anti-racism protesters were equally to blame for the violence that ended in the death of a woman.

The White House said in a statement: “The president and first lady have decided not to participate in this year’s [Kennedy Center Honors] activities to allow the honorees to celebrate without any political distraction.

“First Lady Melania Trump, along with her husband President Donald J Trump, extend their sincerest congratulations and well wishes to all of this year’s award recipients for their many accomplishments.”

Dancer and choreographer Carmen de Lavallade, who is due to be honoured at the December ceremony, said earlier this week that she would boycott the related White House reception for honourees.

“In light of the socially divisive and morally caustic narrative that our existing leadership is choosing to engage in, and in keeping with the principles that I and so many others have fought for, I will be declining the invitation to attend the reception at the White House,” she said in a statement.

Singer Lionel Richie had also suggested he might not attend, telling the NBC Today programme: “I’m not really happy with what’s going on right now with the controversies. They’re weekly, daily, hourly.”

TV producer Norman Lear, who is to receive a lifelong artistic achievement award, also said he would not attend the White House reception.

“It is more important now than ever that we stand up for artists, for artistic expression, and for the valiant fight that artists fight to reveal the wonder and oneness of the human spirit,” he said.