Trump warns N Korea that US military is ‘locked and loaded’ 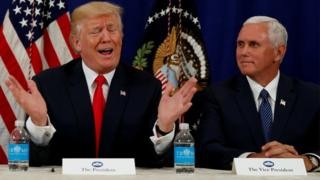 President Donald Trump says the US military is “locked and loaded” to deal with North Korea, ramping up the rhetorical brinkmanship.

He spoke as Pyongyang accused him of “driving” the Korean peninsula to the “brink of a nuclear war”.

North Korea has announced plans to fire missiles near the US territory of Guam.

The Pacific island’s homeland security agency issued a fact sheet on Friday with tips for residents to prepare for any missile threat.

It states: “Do not look at the flash or fireball – it can blind you.”

“Lie flat on the ground and cover your head. If the explosion is some distance away, it could take 30 seconds or more for the blast wave to hit.”

Moscow said the exchange of threats between Washington and Pyongyang “worry us very much”.

Foreign Minister Sergei Lavrov rated the risk of military conflict as “very high” as he put forward a joint Russian-Chinese plan to defuse the crisis.

German Chancellor Angela Merkel said there was no military solution, and “an escalation of the rhetoric is the wrong answer.”

Mr Trump’s tweet follows his threat earlier this week to rain “fire and fury” on Pyongyang.

His latest post came hours after his Defence Secretary Jim Mattis attempted to cool tensions by emphasising a peaceful resolution to the crisis.

Speaking in California late on Thursday, the Pentagon chief said it was his job to be ready for conflict.

But he said the effort by Secretary of State Rex Tillerson and UN Ambassador Nikki Haley “has diplomatic traction, it is gaining diplomatic results”.

Mr Mattis added: “The tragedy of war is well enough known. It doesn’t need another characterisation beyond the fact that it would be catastrophic.”

When asked about US military plans for a potential conflict, he said the country was ready, but he would not “tell the enemy in advance what I’m going to do”.

The US is “the mastermind of nuclear threat, the heinous nuclear war fanatic”, the report said.

Despite the rhetoric from both sides, the Trump administration has been conducting behind-the-scenes diplomacy with North Korea for several months, the Associated Press news agency reports.

Washington has been addressing the issue of Americans detained in the country and escalating tensions on the peninsula, according to AP.

Joseph Yun, the US envoy for North Korea, and Pak Song-Il, a senior North Korean diplomat at the UN, are said to be leading the talks.

The regime was further angered by last week’s UN decision to increase economic sanctions against it.

North Korea said it was finalising a plan to fire medium-to-long-range rockets towards Guam, where US strategic bombers are based, along with more than 160,000 US citizens.

There has been no indication that any actual attack on the Pacific island is imminent.

On Thursday Mr Trump suggested that his own statements on North Korea had not been tough enough, warning the regime to be “very, very nervous”.

China’s state-run Global Times newspaper wrote that Beijing should stay neutral if North Korea launches an attack that threatens the US.

But it also said that if the US and South Korea attacked North Korea to force regime change, then China must intervene to prevent it.

Meanwhile, Australian Prime Minister Malcolm Turnbull said his nation would be prepared to join a conflict against North Korea if the US came under attack.

Australia would honour its commitment under a 1951 treaty, he said, “as America would come to our aid if we were attacked”.