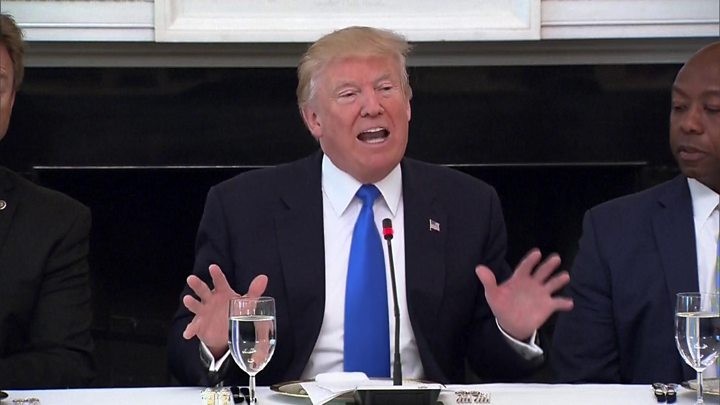 US President Donald Trump has told Senate Republicans they should postpone their summer holiday until they have kept their promise to ditch Obamcare.

Mr Trump told all 52 Republican senators at the White House: “We should hammer this out and get it done.”

The Republicans’ seven-year mission to overturn the law is in disarray.

Mr Trump told Republican senators at a Wednesday lunch: “For seven years you promised the American people that you would repeal Obamacare.

“People are hurting. Inaction is not an option. And frankly I don’t think we should leave town unless we have a health insurance plan.”

Mr Trump warned a senator who was seated next to him that he could lose his job if he did not toe the party line.

A ripple of uncomfortable laughter was heard in the room as the president said of Nevada’s Dean Heller: “And he wants to remain a senator, doesn’t he? OK.”

Mr Heller, who was one of the earliest senators to oppose the first version of the Republican health bill, is up for re-election next year.

Senate Republican leader Mitch McConnell has scheduled a vote early next week on a straight-up repeal of the Affordable Care Act, known as Obamacare.

However, it looks likely to fail after the defections on Tuesday of at least three of the party’s senators.

Mr McConnell pointed out it was the same legislation that all but one Republican senator voted to send to President Barack Obama in 2015, safe in the knowledge he would veto it.

But now the party controls the White House and both chambers of Congress, some rank-and-file Republicans seem wary of enacting legislation that would eliminate medical insurance for millions of Americans.

“Now we thankfully have a president in office who will sign it,” said Mr McConnell, whose reputation as a master tactician has been dented by the imbroglio.

“So we should send it to him.”

With Democrats united in opposition, Mr McConnell can only lose two votes from his 52-48 majority in the 100-seat Senate to pass the bill.

Senators Susan Collins of Maine, Lisa Murkowski of Alaska and Shelley Moore Capito of West Virginia are opposed to repeal.

Overturning Obamacare was a top campaign pledge for Mr Trump and congressional Republicans, who view the law as a costly intrusion into the healthcare system.

Texas Senator Ted Cruz, a conservative, told reporters it was time for them to honour their vow.

“For seven years Republicans have told the voters, if you elect us, we’ll repeal Obamacare,” he said.

“I think we will look like fools if we can’t deliver on that promise.”

The party’s proposed alternative includes steep cuts to Medicaid, a healthcare programme for the poor and disabled.

It would also remove Obamacare’s individual mandate, which requires all Americans to have health insurance or pay a tax penalty.

And there would be a six-month ban on obtaining new medical coverage for anyone who lets their previous policy lapse for more than two months.