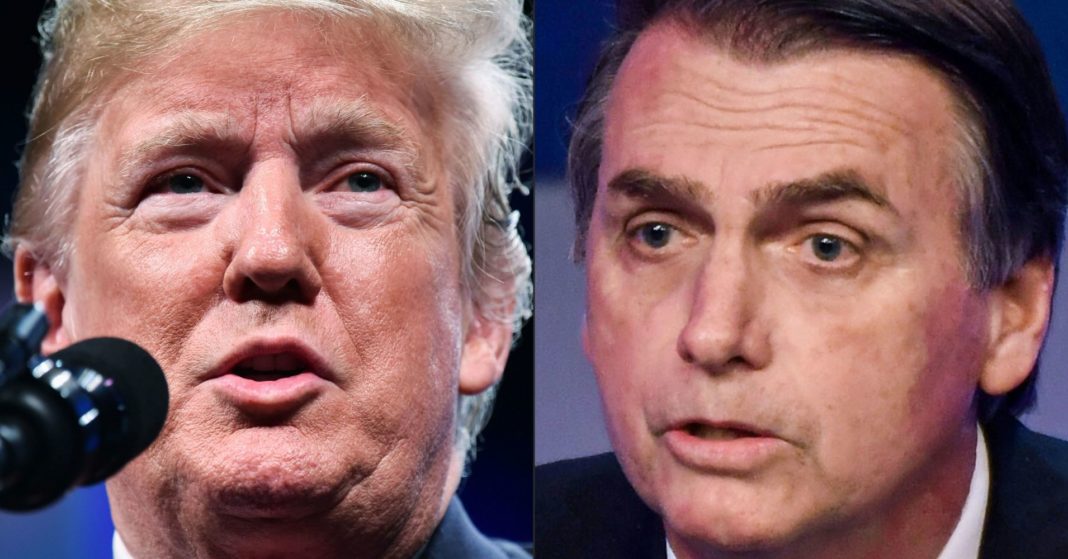 President Donald Trump on Tuesday will host Brazil’s president Jair Bolsonaro at the White House for what will be the first face-to-face meeting for the leaders of the two largest economies in the Americas.

An ardent admirer of Trump’s, Bolsonaro chose Washington as the site of his first state visit since being inaugurated in January of this year. As one nationalist populist to another, Bolsonaro appears eager to strike up a personal alliance with Trump and to forge a strong U.S.-Brazilian bilateral relationship, two goals which set him apart from most of his predecessors.

“For the first time in a long time, a Brazilian President who is not anti-American arrives in Washington,” Bolsonaro tweeted on Sunday. “It is the beginning of a partnership for freedom and prosperity, as Brazilians have always wanted.”

Bolsonaro’s use of Twitter is one of several stylistic similarities between Trump and himself. Others include their bombastic rhetoric, their skepticism of climate change science, their scorn for traditional government ethics and their willingness to publicly attack news outlets if they receive negative press coverage.

As a result, some foreign policy experts have taken to calling Bolsonaro “the Trump of the tropics,” a nickname the Brazilian president has embraced.

The two leaders are expected to put the political crisis in Venezuela at the top of the agenda for their meeting on Tuesday afternoon. The Bolsonaro and Trump administrations have both recognized opposition leader Juan Guaido as the rightful president of Venezuela, and both called for the resignation of current president Nicolas Maduro.

During a conference call with reporters Monday ahead of Bolsonar’s visit, a senior U.S. administration official said the Trump administration hopes the Brazilian military can leverage its historically close ties to the Venezuelan military, in order to convince top brass in Caracas to shift the military’s allegiance from Maduro’s camp to Guaido.

Also on the agenda Tuesday will be trade. Resource-rich Brazil has long had China as its biggest trading partner and its largest export market, with the U.S. a distant second. Bolsonaro, however, has repeatedly signaled frustration with Beijing’s expanding footprint in Latin America. “China doesn’t want to buy in Brazil,” Bolsonaro frequently said on the campaign trail in 2018. “It wants to buy Brazil.”

This kind of rhetoric closely mirrors Trump’s own views on trade, which are largely centered around his belief that other countries have taken unfair advantage of the United States, and none more so than China.

This philosophical alignment on trade also reflects the views of one particular political adviser who has shaped both Bolsonaro’s outlook on the world and Trump’s: Former Trump White House senior adviser Steve Bannon.

Bannon left the Trump administration in 2017, after having served in senior roles on both the Trump campaign and then inside the West Wing.

But in many ways, Bannon’s populist, nationalist and isolationist views never left the building, and they continue to shape Trump’s approach to governing, to foreign policy and to the country’s economic priorities.

Following his White House stint, Bannon shopped his political message around the world, and found an eager audience in members of Bolsonaro’s campaign team. Bolsonaro even adopted Trump’s “America first” slogan for his own campaign, promising to put “Brazil first.”

On Sunday night, Bannon was one of a group of conservative U.S. political figures who dined with Bolsonaro at the Brazilian embassy in Washington.

Despite the long shadow that Bannon’s dark worldview will cast over Tuesday’s meeting, Trump’s current White House aides struck an upbeat and optimistic note about the meeting.

“We’re very much looking forward to the visit of President Bolsonaro of Brazil,” National Security Adviser John Bolton told reporters outside the White House Tuesday. “This is a potentially historic opportunity to redirect relations between our two countries, the two largest democracies in the Western Hemisphere. I think it will have a profound impact not just in this hemisphere, but really around the world,”