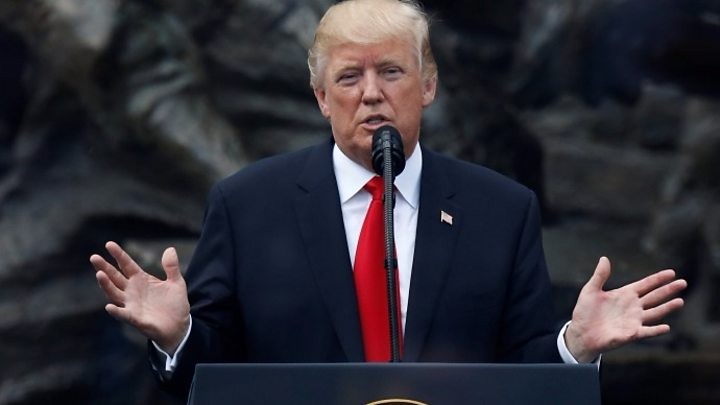 US President Donald Trump has called on Russia to stop “destabilising” Ukraine and other countries and end support for “hostile regimes” such as those in Syria and Iran.

The Kremlin rejected his comments.

The US leader has travelled to Hamburg for the G20 summit, where he will meet Russian President Vladimir Putin for the first time.

He also faces differences with other leaders, including German Chancellor Angela Merkel, who said last week that the G20 would focus on the Paris climate deal – which the US has withdrawn from.

Up to 100,000 protesters are expected over the two-day event and police have warned of potentially violent clashes. They have already confiscated a number of homemade weapons.

“It’s important because you have the biggest meeting of all of the leading rulers of the main countries in the world – the G20 – and I don’t like some of the politics that they’re doing, especially that of [Recep Tayyip] Erdogan, of Putin and of Trump,” one protester told the BBC.

In Warsaw, Mr Trump argued that the future of Western civilisation itself was at stake and asked whether the West had the “will to survive”.

He urged Russia to join the “fight against common enemies and in defence of civilisation itself”.

Mr Trump referred to Russia’s “destabilising” behaviour twice in one day in Poland. But the Kremlin spokesman has shrugged that off, saying simply that Moscow “does not agree”. It’s all part of the wait-and-see approach here.

Russia once had great hopes that Donald Trump could rescue relations from the pit into which they were plunged after it annexed Crimea from Ukraine. Almost six months into the Trump presidency, there may be increasing pessimism.

But the Kremlin is calling Mr Trump’s meeting with Mr Putin on Friday an important chance to get acquainted. Perhaps it is betting that personal dynamics will help overcome policy differences.

After all, officials here insist that it is simply “Russophobia” in the US that has prevented President Trump “getting along” with Russia as he said he wanted.

They have certainly noted how in Poland he shied away from accusing Russia unequivocally of meddling in the US elections. Moscow has argued all along that there is no proof. In public at least, Mr Trump appeared to agree with that.

The US leader also hailed Poland as an example of a country ready to defend Western freedoms.

Giving a news conference ahead of his Warsaw speech, Mr Trump also: