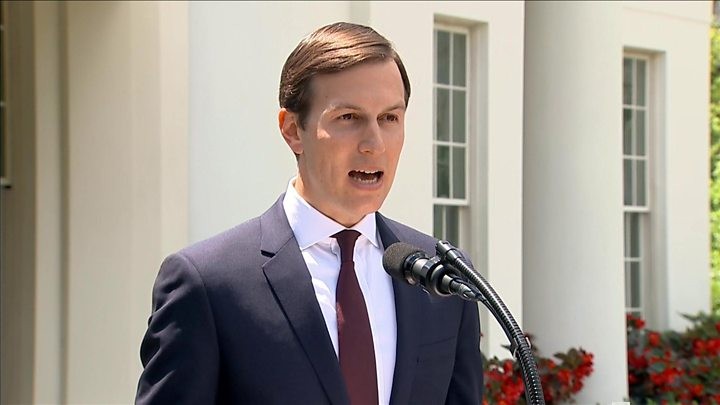 Donald Trump’s son-in-law has defended his conduct in last year’s presidential campaign, after giving evidence to a Senate panel investigating Russian interference in the election.

Jared Kushner said all of his “actions were proper and occurred in the normal course of events” of the campaign.

Mr Kushner, 36, has also denied any collusion with Russia.

He is a senior adviser to the president and was in charge of the campaign’s digital strategy.

He is married to Mr Trump’s daughter, Ivanka.

Speaking at the White House after a closed-door session of the Senate Intelligence Committee, Mr Kushner said he had been “fully transparent in providing all the requested information”.

“Let me be very clear – I did not collude with Russia, nor do I know of anyone else in the campaign who did so. I had no improper contacts,” he said.

Mr Kushner, who keeps a very low media profile, will appear before the equivalent House of Representatives committee on Tuesday.

In a statement to both congressional committees released before the Senate session on Monday, he said there were “hardly any” contacts with Russian representatives, adding later that there were “perhaps four”.

He refers to a meeting with Russian lawyer Natalia Veselnitskaya in June last year. She had allegedly promised damaging material on Hillary Clinton.

Mr Kushner said he arrived late at the meeting, realised little of note was being discussed and that it was “time not well-spent”.

Mr Trump Jr said former campaign chief Paul Manafort was also at the meeting and that no compromising material on Mrs Clinton was provided.

Mr Kushner on his meetings with Russians:

In his statement, Mr Kushner accepted that he failed initially to reveal his contacts with Russians.

He says the first form, a “rough draft that still had many omissions”, was filed by an assistant in error on 18 January and that declarations on his foreign contacts, not just with Russians, were added over the next six months “in the normal course”.

Mr Trump Jr and Mr Manafort had been scheduled to appear before Congress on Wednesday to testify but that has been delayed indefinitely as lawyers negotiate on the documentation and information to be discussed.

Analysis: An exercise in caution

In his Senate testimony Jared Kushner says he has nothing to hide and is “happy” to share information with those investigating possible Russian meddling in the 2016 presidential campaign.

His written statement, however, is an exercise in caution and lawyerly discretion. He addresses only the controversies already in the public sphere, then offers his explanation for why they are no big deal.

He receives hundreds of emails a day and didn’t read his brother-in-law’s forwarded message that said the Russian government wanted to help the Trump campaign.

Reports of an effort to set up back-channel communications with Russia after the election were a halted effort to get information about Syria from Russian generals.

He met with an influential Russian banker because the Russian ambassador – whose name he couldn’t initially remember – was so persistent.

The incomplete security form was the result of a “miscommunication” with an assistant who submitted it too soon.

Beyond that, there are no new revelations; no new disclosures. If what’s already out is all there is, Mr Kushner and his lawyers have done their best to defuse the bombs. When walking in a minefield, it’s the ones you don’t know about that pose the greatest risk.

He continued his tirade against the investigation process on Sunday, tweeting: “As the phony Russian Witch Hunt continues, two groups are laughing at this excuse for a lost election taking hold, Democrats and Russians!”

Russia has also denied any involvement.