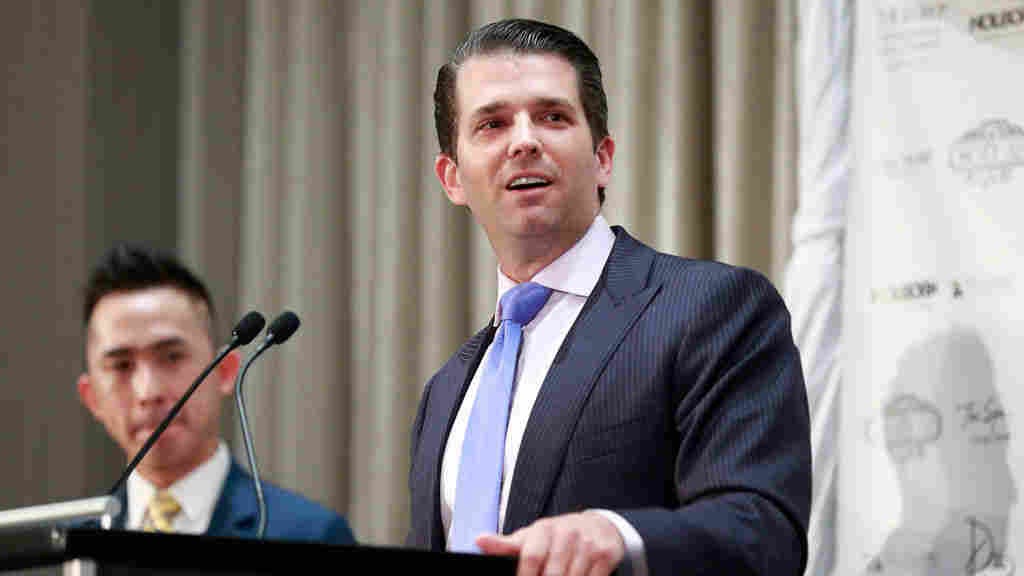 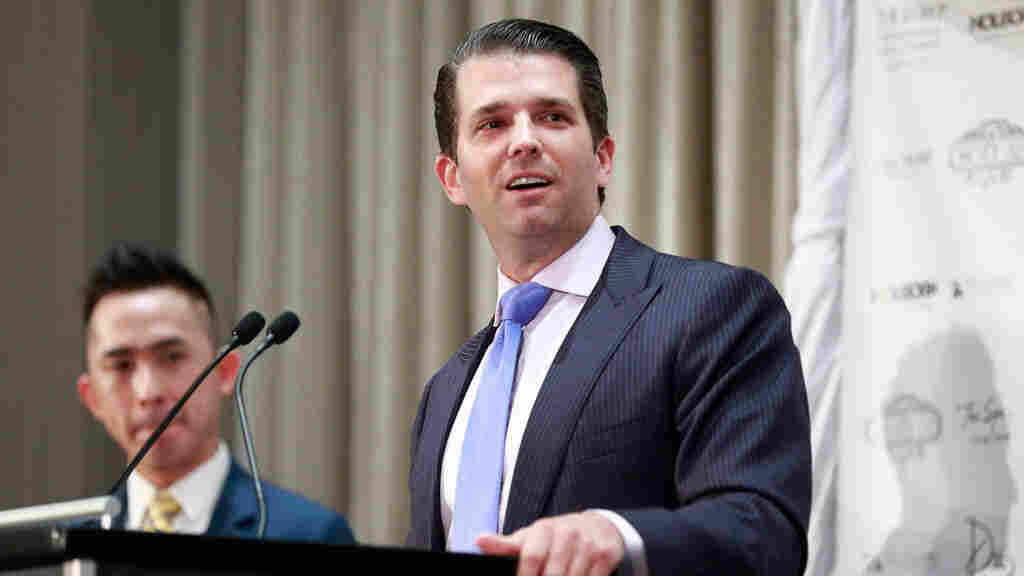 The president’s eldest son, Donald Trump, Jr., admitted Sunday in a statement that he met with a Russian lawyer in June 2016 who was said to have had information helpful to his father’s campaign against Hillary Clinton. He said the lawyer did not end up giving any information. Jeff Vinnick /Getty Images hide caption

The president’s eldest son, Donald Trump, Jr., admitted Sunday in a statement that he met with a Russian lawyer in June 2016 who was said to have had information helpful to his father’s campaign against Hillary Clinton. He said the lawyer did not end up giving any information.

President Trump’s eldest son, Donald Trump, Jr., admitted Sunday to meeting last summer with a Russian attorney because she “might have information helpful to” his father’s campaign.

The meeting was first reported by the New York Times and occurred just weeks after Trump secured the GOP nomination. It was also attended by Trump’s then-campaign chairman Paul Manafort, who would later briefly serve as campaign manager, and Trump’s son-in-law Jared Kushner, who now serves as a White House senior adviser.

Citing multiple sources, the Times reports that Trump Jr. “was promised damaging information about Hillary Clinton before agreeing to meet” with the Kremlin-connected lawyer.

In a statement provided to NPR by The Trump Organization, the younger Trump confirmed the meeting in June 2016, but claimed the lawyer provided no useful information and eventually turned the subject toward policies on Russian adoption:

“I was asked to have a meeting by an acquaintance I knew from the 2013 Miss Universe pageant with an individual who I was told might have information helpful to the campaign. I was not told her name prior to the meeting. I asked Jared and Paul to attend, but told them nothing of the substance. We had a meeting in June 2016. After pleasantries were exchanged, the woman stated that she had information that individuals connected to Russia were funding the Democratic National Committee and supporting Ms. Clinton. Her statements were vague, ambiguous and made no sense. No details or supporting information was provided or even offered. It quickly became clear that she had no meaningful information. She then changed subjects and began discussing the adoption of Russian children and mentioned the Magnitsky Act. It became clear to me that this was the true agenda all along and that the claims of potentially helpful information were a pretext for the meeting. I interrupted and advised her that my father was not an elected official, but rather a private citizen, and that her comments and concerns were better addressed if and when he held public office. The meeting lasted approximately 20 to 30 minutes. As it ended, my acquaintance apologized for taking up our time. That was the end of it and there was no further contact or follow-up of any kind. My father knew nothing of the meeting or these events.”

On Saturday, Trump Jr. had offered a different explanation for the meeting, focusing solely on the adoption issue:

“It was a short introductory meeting. I asked Jared and Paul to stop by. We primarily discussed a program about the adoption of Russian children that was active and popular with American families years ago and was since ended by the Russian government, but it was a campaign issue at the time and there was no follow up.

I was asked to attend the meeting by an acquaintance, but was not told the name of the person I would be meeting with beforehand.”

The startling admission by President Trump’s son is only the latest twist in the ongoing saga over Russian interference in the election and whether or not his campaign colluded with Russian officials. Multiple investigations are ongoing and include one by Justice Department special counsel Robert Mueller, as well as investigations by the House and Senate Intelligence Committees.

And, as the Times notes, the revelation of this meeting “points to the central question in federal investigations of the Kremlin’s meddling in the presidential election: whether the Trump campaign colluded with the Russians. The accounts of the meeting represent the first public indication that at least some in the campaign were willing to accept Russian help.”

The Times identified the Russian lawyer as Natalia Veselnitskaya, and the Washington Post reported that the intermediary who set up the meeting between her and Trump Jr. was Rob Goldstone, a music publicist.

Mark Corallo, a spokesman for President Trump’s legal team regarding the Russia investigations, said in a statement that, “The President was not aware of and did not attend the meeting” between his son, Kushner, Manafort and the Russian attorney.

The news of this meeting comes just after President Trump has returned from the G-20 Summit where he met with Russian President Vladimir Putin on Friday. Trump has continued to waffle on whether or not Russia sought to meddle in last year’s U.S. elections in an effort to help his campaign. Last week, Trump said, “I think it was Russia, and I think it could have been other people in other countries,” and later backtracked, saying “Nobody really knows for sure.” However, those lukewarm statements are at odds with what Trump’s own intelligence chiefs have testified before Congress, saying they are convinced it was Russia.

On Sunday, Trump took to Twitter saying that he “strongly pressed” Putin on the election accusations, which the Russian president “vehemently denied.” Seemingly accepting Putin’s assurances, Trump said it was now time “to move forward in working constructively with Russia,” including a joint cyber security effort that was derided by members of the president’s own party. Later Sunday evening, Trump walked back that idea.

The fact that President Putin and I discussed a Cyber Security unit doesn’t mean I think it can happen. It can’t-but a ceasefire can,& did!