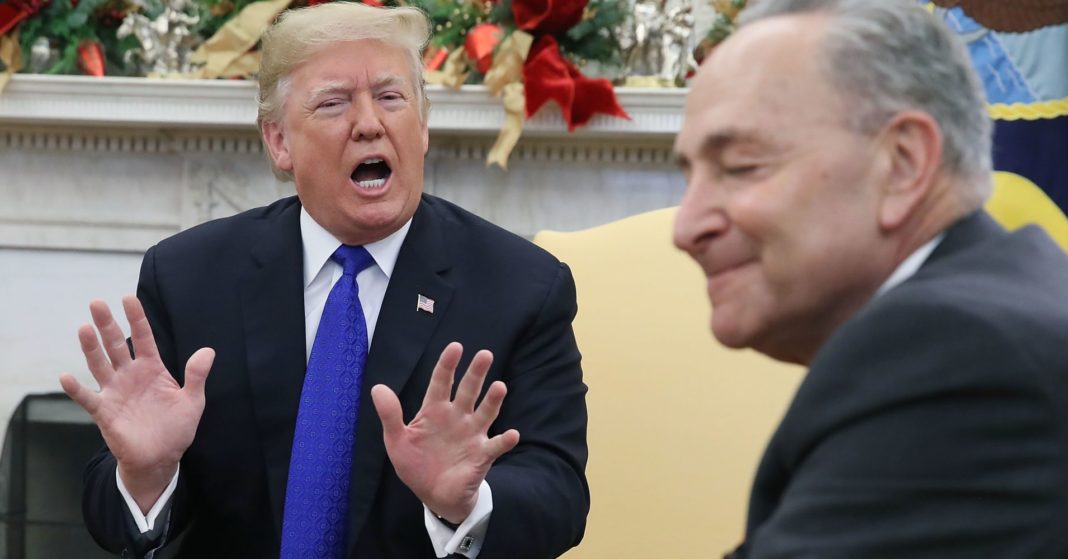 President Donald Trump sent mixed messages on Thursday over his willingness to shutdown the government over his proposed border wall, as polls show support for it rising among Americans.

Early Thursday morning, Trump said in a post on Twitter that talk about the wall was distracting from the work being done by border patrol and the military. But hours later, the president repeated his demand for wall funding in a government spending bill.

In a morning tweet that came just three days after blasting Democrats for “saying that you can have good Border Security without a Wall,” the president, facing the diminishing viability of his plan, said that talk of the wall was distracting from the “great job being done on our Southern Border.”

“Remember the Caravans? Well, they didn’t get through and none are forming or on their way,” the president wrote. “Border is tight.”

Just before 11 a.m., the president wrote in a post that when he “begrudgingly signed the Omnibus Bill, I was promised the Wall and Border Security by leadership. Would be done by end of year (NOW). It didn’t happen!”

“We foolishly fight for Border Security for other countries – but not for our beloved U.S.A,” Trump wrote. “Not good!”

The conflicting messages, coming as the House GOP was meeting in a closed-door conference, have created an air of uncertainty as the president’s odds of securing funding have slipped.

The White House did not respond to a request for comment.

On Wednesday, Sen. Majority Leader Mitch McConnell ignored the president’s demands for a wall by introducing a short-term spending measure that is silent on the issue. The measure, if approved in the House, will fund the government through the first week of February, punting the fight over the wall into the starting weeks of Rep. Nancy Pelosi’s term as Speaker of the House.

The measure disappointed the president’s conservative base, including traditional allies. Trump has yet to say if he will sign off on the plan. Building a wall along the southern border was a signature aspect of the president’s campaign for the presidency and played a key role at his political rallies, where he led chants of “Build that wall!”

Though the political outlook for the wall is grim, support among Americans has actually grown since Trump took office. Support hit a record last week, according to a Quinnipiac University poll released Tuesday, even as a majority of voters continue to oppose it.

“If he agrees to the CR, which would continue funding the government at the current levels, he won’t get $1-point-anything [billion] for the wall,” Fox & Friends co-host Steve Doocy said Wednesday.

The House Freedom Caucus, the right-fringe of Republicans in the lower chamber, called on the president to veto McConnell’s proposal Wednesday night, and cited Trump’s previous remarks saying he would not sign another spending bill that did not include wall funding.

“I rise to encourage my colleagues to stay in the fight to have the president deliver on a promise,” caucus chairman Mark Meadows, R-N.C., said from the floor of the House. The freedom caucus, which was occasionally able to tank bills while Republicans held the majority, will lose that power once Democrats take control in two weeks.

In response to criticism from the base, the White House has issued a number of statements this week that have sought to create political space for the president to sign a bill that does not include wall funding.

White House Press Secretary Sarah Huckabee Sanders played down the president’s claim that he would be “proud” to have a shutdown over the issue, telling Fox News Tuesday that “at the end of the day we don’t want to shut down the government, we want to shut down the border.” She said that the White House had “other ways” of getting the $5 billion in funding for the wall that the president has demanded.

The next day, Trump said that that the military will build the wall — something that experts say is unlikely to be viable without congressional appropriations — and contended that “Mexico is paying (indirectly) for the Wall through the new USMCA, the replacement for NAFTA!”

But Thursday’s post suggests a new political argument from the president: That the border is already secure.

It is a point that Trump seemed to waver about on December 11 during a heated Oval Office confrontation with Minority Leader Chuck Schumer, D-N.Y., and Pelosi.