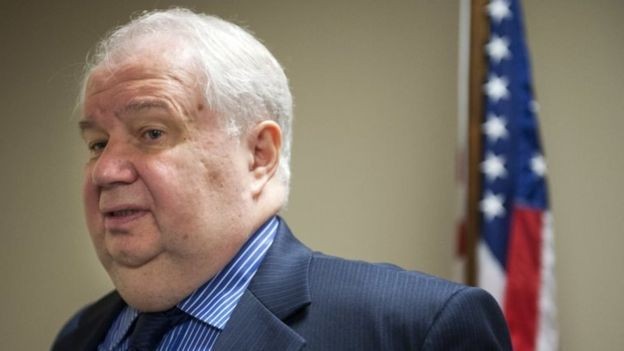 Trump also bashed acting FBI director Andrew McCabe, whom he described as “the person in charge of the Hillary investigation.” Trump said McCabe “got $700,000” from Clinton for his wife, Jill McCabe, who ran for the Virginia state Senate in 2015 and lost.

In criticizing Sessions, whom he has called “beleaguered,” Trump wrote in a third tweet that Ukraine had tried to “sabotage” his presidential election campaign last year while “quietly working to boost Clinton.” He asked, “So where is the investigation A.G.”

The line of attack reprised Trump’s recent criticism of Sessions, a former Alabama senator who emerged last year as the strongest congressional supporter of the real estate developer’s campaign for president.

On Monday, Trump tweeted from his personal account: “So why aren’t the Committees and investigators, and of course our beleaguered A.G., looking into Crooked Hillarys crimes & Russia relations?”

Trump has been attacking Sessions for his decision to recuse himself from investigations into possible connections between Trump’s campaign and Russia.

The onslaught raised questions about Sessions’s tenure as attorney general.

Sessions announced in March that he was recusing himself from investigations related to the 2016 presidential campaign, including probes of Russian interference, on grounds that he had been involved in the campaign. He made his recusal announcement a day after The Washington Post reported that he had twice met with Russian Ambassador Sergey Kislyak during the campaign and did not disclose those meetings during his confirmation hearing in January before the Senate Judiciary Committee.

Trump told the New York Times last week that if he had known Sessions would recuse himself, he would not have nominated him to be attorney general. He told the paper in an interview that he believes Sessions’s recusal decision was “very unfair to the president.”

Jenna Johnson and Matt Zapotosky contributed to this report.