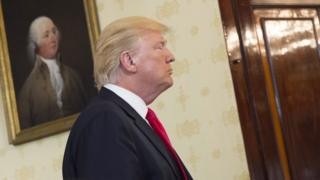 US President Donald Trump has issued a challenge to Republican senators to rally behind their healthcare bill, on the eve of a crucial vote.

“Now is the time for action,” President Trump said in a rare healthcare speech.

A procedural vote is due on Tuesday as Republicans push forward in their attempt to repeal President Barack Obama’s signature law.

But among Republicans there is confusion about the bill and it is unclear whether it will pass.

Senator Ron Johnson told reporters: “I don’t have a clue what we’re going to be voting on.”

What is the vote on Tuesday about?

Senators will vote on a procedural motion to start debate on a health care bill.

They have a majority in the Senate but there are deep divisions in their party on the issue.

“Many of us have waited literally years for this moment to arrive and, at long last, it finally has,” said Republican Senate leader Mitch McConnell on the Senate floor.

But several senators have expressed unhappiness over the process, because it is not clear what they will vote on if the procedure vote passes.

There appear to be two choices – either a repeal-and-replace bill that has already struggled to win support across the party, or a bill that enacts repeal with a two-year delay, in the hope of finding agreement before that time elapses.

Senator John McCain, recently diagnosed with an aggressive brain tumour, will return to Congress to cast his vote.

The president increased the pressure on his party by warning them they had a duty to adhere to seven years of promises.

In a White House speech laced with frustration, President Trump said: “To every member of the Senate I say this: The American people have waited long enough.

“There’s been enough talk, and no action. Now is the time for action.”

He lambasted his predecessor’s overhaul of healthcare, known as Obamacare, and stood alongside people he said were “victims” of the 2010 law.

Obamacare extended healthcare insurance to about 20 million people but Republicans hate the way it introduced government-run marketplaces, where premiums have risen sharply for some people.

What have Republicans proposed?

The party’s proposed alternative includes steep cuts to Medicaid, a healthcare programme for the poor and disabled.

And it removes Obamacare’s individual mandate requiring all Americans to have health insurance or pay a tax penalty.

The non-partisan Congressional Budgetary Office (CBO) found the bill would be strip 22 million Americans of health insurance over the next decade.

But if the bill gets to the floor of the Senate, amendments could be added to change the various provisions.

And what’s this stuff about a duel?

A Republican politician has blamed “female senators” for the spluttering efforts by his party to pass a healthcare bill.

Blake Farenthold, a congressman from Texas, told a local radio station if a man from his state was responsible, he would challenge him to a duel.

“Some of the people that are opposed to this, they’re some female senators from the North East.”

If it was “a guy from south Texas” who was generating so much discord in the party, he said, he would ask them to settle their differences in a gun fight.

Susan Collins of Maine was one of three female Republicans who said they could not back the Senate’s last healthcare plan, a repeal with two-year delay, which hit the buffers last week.

Ms Collins, a moderate Republican, has been strongly opposed to the Republican bill from the start over the cuts to Medicaid.

Republican Senators Lisa Murkowski of Alaska and Shelly Moore Capito of West Virginia also came out against the bill, expressing concerns over plans to weaken protections for people with pre-existing conditions and affordability.

There was an outcry when Republican Senate leader Mitch McConnell drafted the first healthcare bill in private among a group of 13 that did not include any women.