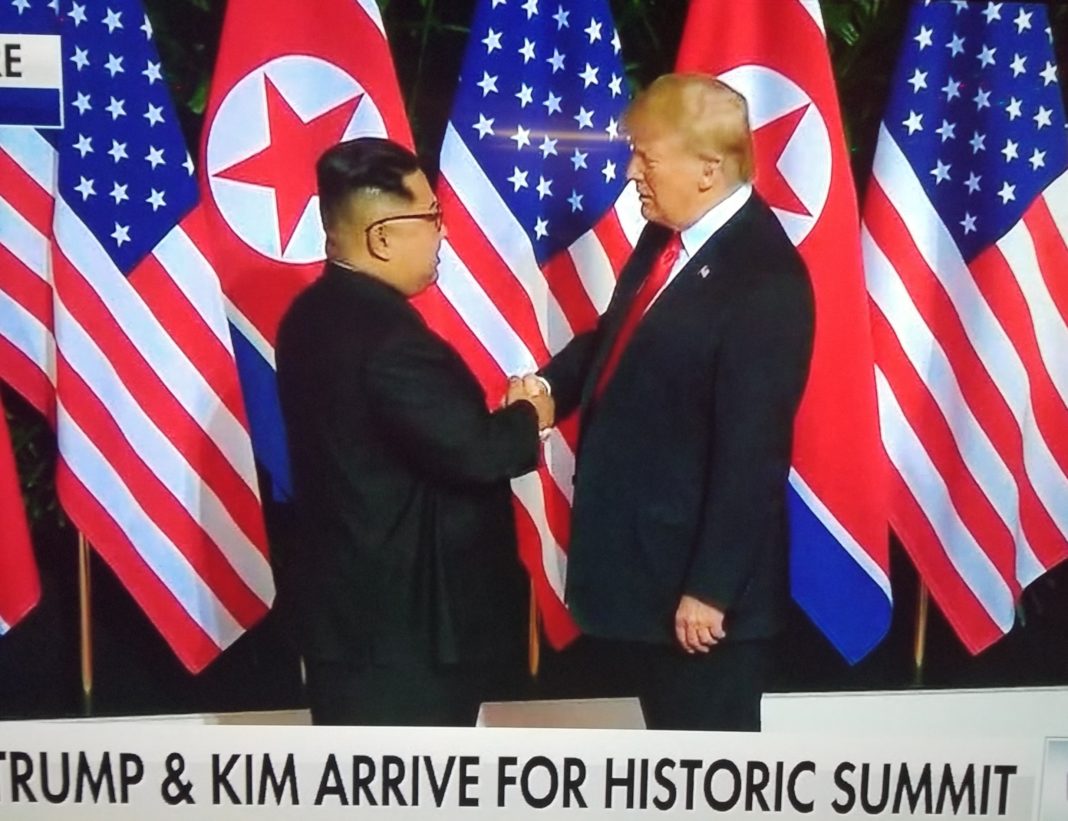 The Pentagon has reassured allies of its “ironclad” security commitments, after President Donald Trump cancelled its Korean military exercises.

The move is seen as a big concession to North Korea and appeared to take US allies in the region by surprise.

Meanwhile, North Korean state media said Mr Kim had accepted an offer from President Trump to visit the US.

In his first reported comments since the talks, Mr Kim said it was “urgent” to halt “irritating and hostile military actions against each other”.

He said the two countries “should commit themselves to refraining from antagonising” each other “and take legal and institutional steps to guarantee it”, KCNA reported.

The Kim-Trump summit – the first such meeting between the two countries – centred on nuclear disarmament and reducing regional tensions. It concluded with a one-page agreement.

In the press conference afterwards, however, Mr Trump added another announcement: the cancellation of the military exercises.

The drills, often called “war games”, are held in South Korea with local forces and US soldiers stationed there.

Mr Trump also said he wanted to bring US troops home – although he did not specify a timeframe.

He said the drills were “provocative” – even though the US has previously defended them – and there were suggestions that US allies had not been forewarned of this move.

South Korea’s Presidential Blue House said it needed “to find out the precise meaning or intentions” of Mr Trump’s statement.

South Korean President Moon Jae-in spoke by phone with Mr Trump for 20 minutes late on Tuesday, but an official readout of the call made no mention of military exercises, according to Reuters.

Did the Pentagon know?

The previous day US Defence Secretary Jim Mattis told reporters he did not believe that troop levels were on the agenda. When asked if he would know if such discussions were planned, he said, “Yeah, I sure would.”

However, the Pentagon has since denied that Mr Mattis was caught off guard. He was consulted ahead of time, said Pentagon spokesperson Dana White.

In a statement sent to the BBC, she said: “Our alliances remain ironclad, and ensure peace and stability in the region.”

What else has Donald Trump said?

In a flurry of tweets later on Tuesday, Mr Trump said there was “no limit” to what North Korea could achieve if it gave up its nuclear weapons.

He thanked Mr Kim for “taking the first bold step toward a bright new future for his people” and said the world had taken “a big step back from potential nuclear catastrophe”.

The World has taken a big step back from potential Nuclear catastrophe! No more rocket launches, nuclear testing or research! The hostages are back home with their families. Thank you to Chairman Kim, our day together was historic!

What are the war games?

The US maintains around 30,000 troops in South Korea and once a year it brings in others – typically from its Pacific base in Guam – to join large-scale drills.

North Korea sees the annual exercises as a rehearsal for invasion, but the government in Seoul maintains they are defensive in nature.

Mr Trump said scrapping them will save a “tremendous amount of money”, but he added that they could be reinstated if co-operation from the North declines.

What else did they agree at the summit?

The summit began with a handshake, unimaginable just months ago.

Mr Trump and Mr Kim – who traded vicious insults last year – gripped each other’s hands in front of US and North Korean flags.

After a one-on-one meeting, followed by wider talks with advisers and a working lunch, they presented their agreement.

It said the two countries would co-operate towards “new relations”, while the US would provide “security guarantees” to North Korea.

…Got along great with Kim Jong-un who wants to see wonderful things for his country. As I said earlier today: Anyone can make war, but only the most courageous can make peace! #SingaporeSummit

Heading back home from Singapore after a truly amazing visit. Great progress was made on the denuclearization of North Korea. Hostages are back home, will be getting the remains of our great heroes back to their families, no missiles shot, no research happening, sites closing…

Mr Kim also “reaffirmed his firm and unwavering commitment to complete denuclearisation of the Korean peninsula”.

Observers say the document lacks substance, in particular on how denuclearisation would be achieved.

However, speaking to reporters after, Mr Trump said:

Several reporters asked whether Mr Trump had raised the issue of human rights with Mr Kim, who runs a totalitarian regime with extreme censorship and forced-labour camps.

The US president said he had, and repeated his description of Mr Kim as “talented”.

Two years ago Barack Obama travelled to Cuba – and was roundly denounced by conservatives for breaking bread with totalitarian leaders and praised by liberals for his statesmanship. Now, with Donald Trump’s summit with Kim Jong-un, the tables have been turned. Mostly.

On conservative Fox News and among Mr Trump’s core supporters, the president was lauded for a historic diplomatic breakthrough. Among Democrats, there was more than a fair amount of concern that the president was engaging in a glorified publicity stunt with little chance of success.

Republicans in Congress have been more measured. There was plenty of talk of “historic first steps”, in Senate Majority Leader Mitch McConnell’s words, but concern over how the yet-to-be negotiated verification details will turn out.

A few other conservatives expressed dismay at seeing the US and North Korean flags side-by-side, and viewed Mr Trump’s solicitous manner and warm words for Mr Kim as too much, given his nation’s history of human rights violations.

Tuesday was the latest reminder that in just 16 months, US – and international – politics have been turned upside down.