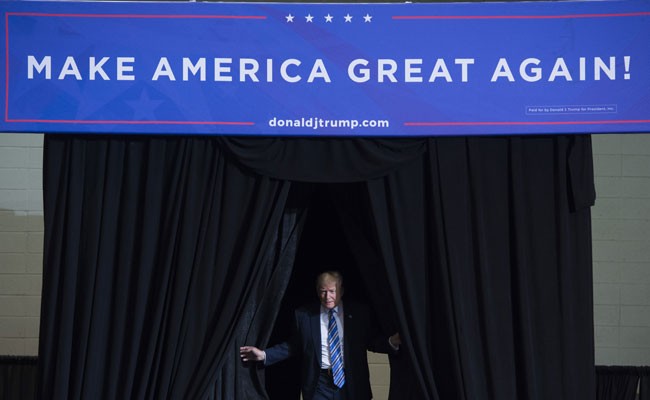 As news broke of a terrorist attack in Paris in November 2015, Trump immediately tweeted that he was praying for “the victims and hostages.”  Very soon after a shooting at an Orlando nightclub in June 2016, Trump tweeted that he was “right on radical Islamic terrorism.”

But he kept quiet Saturday morning as a protest led by white nationalists, who arrived with torches and chants in Charlottesville, on Friday night, turned violent. The cable networks that he usually watches showed footage of increasingly violent clashes between the white nationalists, some of whom looked like soldiers because they were so heavily armed, and the counterprotesters who showed up to challenge them.

He kept quiet as David Duke, the former leader of the Ku Klux Klan, declared that the scene in Charlottesville is a “turning point” for a movement that aims to “fulfill the promises of Donald Trump.”

The president kept quiet as Virginia Gov. Terry McAuliffe (D) declared a state of emergency — and as Trump’s own wife responded, writing in a tweet that “no good comes from violence .”

Cable news commentary, Twitter and the inboxes of White House spokesmen quickly filled with this question: Where is the president?

Then, at 1:19 p.m. in New Jersey, Trump took a break from his working vacation at his private golf club to tweet: “We ALL must be united & condemn all that hate stands for. There is no place for this kind of violence in America. Lets come together as one!”

Trump has long tiptoed around the issue of white supremacy and has yet to provide a full-throttled rebuke of those who invoke his name. He had to be repeatedly pushed to denounce Duke after the former KKK leader endorsed him and praised him.

Trump’s candidacy excited many white nationalists, who were thrilled to hear Trump mock the Black Lives Matter movement on the campaign trail and declare that “all lives matter.” They rallied behind his promises to build a wall on the southern border, reduce the number of foreigners allowed into the country and pressure everyone in the country to speak English and say “Merry Christmas.” And they celebrated Trump selecting Stephen K. Bannon as his chief strategist, who formerly ran the right-wing Breitbart News and advocated for what he calls the “alt-right” movement.

About two hours after the president’s tweet, Trump expanded with four-minute statement that began: “We condemn in the strongest possible terms this egregious display of hatred, bigotry and violence on many sides.” He then added for emphasis: “On many sides.”

When asked what the president meant by “on many sides,” a White House spokesperson responded: “The President was condemning hatred, bigotry and violence from all sources and all sides. There was violence between protesters and counterprotesters today.” When pressed on what exactly the president saw or heard from the counterprotesters that was bigoted or hateful, the spokesman did not respond.

Later in the evening, Trump offered his condolences to a victim and “best regards to all of those injured.”

Trump never used the words “white supremacy” or “white nationalism.” He didn’t detail what acts or words he considers to be hateful or bigoted. He didn’t mention the vehicle that had driven into a crowd of counterprotesters in Charlottesville — a tactic that has been repeatedly used by Islamic State terrorists. He scolded both sides and treated their offenses as being equal. He was vague enough that his statement could be interpreted in a number of different ways.

But many other Americans wanted their president to be crystal-clear when it comes to white supremacy and what they were witnessing in Charlottesville. The president’s tweet and statement were quickly questioned and protested.

“There is only one side,” tweeted former vice president Joe Biden.

Many Democrats were more critical of Trump.

“The President’s talk of violence ‘on many sides’ ignores the shameful reality of white supremacism in our country today, and continues a disturbing pattern of complacency around such acts of hate,” House Minority Leader Nancy Pelosi said in a statement.

One a single day last August, her campaign released a video that featured Ku Klux Klan members and other white supremacists touting Trump’s candidacy — then gave a speech condemning past racially inflammatory remarks by Trump and his support among the “alt-right,” which she described as an “emerging racist ideology.”

In a series of tweets Saturday, Clinton said her “heart is in Charlottesville today” and added that “the incitement of hatred that got us here is as real and condemnable as the white supremacists in our streets.”

Many Republicans took a similar approach.

Former Arkansas governor Mike Huckabee (R), whose daughter, Sarah Huckabee Sanders is Trump’s press secretary, tweeted: “ ‘White supremacy’ crap is worst kind of racism-it’s EVIL and perversion of God’s truth to ever think our Creator values some above others.”

Sen. Marco Rubio (R-Fla.) and Sen. Cory Gardner (R-Colo.) both urged the president to use the words “white supremacists” and to label this as a terrorist attack.

Sen. John McCain (R-Ariz.) released a strongly worded statement that said, in part: “White supremacists and neo-Nazis are, by definition, opposed to American patriotism and the ideals that define us as a people and make our nation special.”

And Sen. Orrin G. Hatch (R-Utah) tweeted: “We should call evil by its name. My brother didn’t give his life fighting Hitler for Nazi ideas to go unchallenged here at home.”