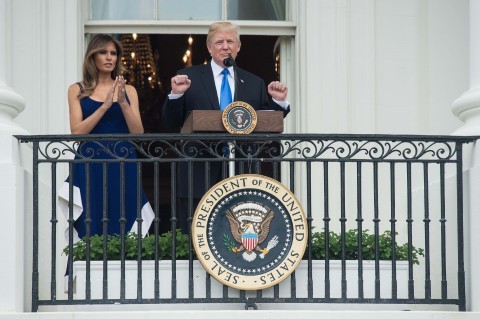 The process of staffing the Trump administration and filling judicial vacancies has moved slowly on both ends of Pennsylvania Avenue, with only about one in five of President Trump’s civilian nominations receiving confirmation from the Senate, and committees waiting on paperwork for more than two dozen nominees.

New figures from the nonpartisan Congressional Research Service point to a marked slowdown in the pace of nominating and confirming personnel compared with prior administrations. Trump had submitted 242 civilian nominations to the Senate as of June 30, fewer than any of his four immediate predecessors. At the same time, only 50 have been confirmed, a smaller proportion than under previous administrations.

The research suggests that the significant number of vacancies in the Trump administration — and the concerns about policymaking that accompany them — are likely to persist unless both the White House and the Senate markedly accelerate their pace. And while Senate Democrats have worked to slow down the process, it appears some of the fault could lie with the Trump administration’s failure to turn around necessary documents.

Republicans and Democrats each blamed the other party for the slow pace.

Tracking how many key positions Trump has filled so far

Senate Minority Leader Charles E. Schumer (D-N.Y.), who has noted Trump’s failure so far to enact significant legislation, said Republicans have accomplished little because they approach the process in a “totally partisan” way. “If they work with Democrats, they might be able to get something done,” he said in a statement.

A Schumer spokesman, Matt House, pointed to data gathered by his office showing the administration has not submitted complete paperwork for at least 25 nominees — another possible cause for delay.

The White House did not respond to requests for comment.

The Senate is preparing to spend much of the next week focused on nominations.

There are 33 nominees awaiting a vote by the full chamber, including Patrick M. Shanahan to serve as deputy secretary of defense; William Francis Hagerty IV to be the next U.S. ambassador to Japan; and a slate of picks to fill vacancies at the Pentagon and departments of Housing and Urban Development, Transportation, Treasury, and Health and Human Services.

On Monday, the Senate is scheduled to confirm Neomi Rao, a law professor at George Mason University, to serve as the White House’s regulatory czar. And Wednesday, the Senate Judiciary Committee is scheduled to hold a confirmation hearing for Christopher A. Wray to serve as the next director of the FBI. Republicans are expected to push to confirm Wray before the five-week summer recess begins in early August.

Also next week, senators are set to confirm David Nye to a federal district court in Idaho.

Since Trump’s inauguration, Senate Democrats have at times sought to slow down committee work to protest the president’s agenda or, before the appointment of Robert S. Mueller III as special counsel, the lack of an independent investigation into Russia’s election meddling.

In late January, Democrats boycotted a Senate Finance Committee hearing in which members were scheduled to vote on then-Rep. Tom Price (R-Ga.) and Steven Mnuchin to lead the Health and Human Services and Treasury departments, respectively. By denying Republicans a quorum in committee, Democrats forced them to reschedule the votes. They also managed to block a committee vote on then-Sen. Jeff Sessions (R-Ala.) as attorney general.

As of this week, several committees are waiting on additional paperwork to advance more nominees. Among those nominees missing documents, according to House, are Jessica Rosenworcel, nominated for FCC commissioner; George Nesterczuk, nominated as director of the Office of Personnel Management; and Thomas Bowman, nominated as deputy secretary of Veterans Affairs.

Additionally, some committees have received notice of the administration’s intention to nominate someone, but not the nomination itself, House said.

Ed O’Keefe contributed to this report.