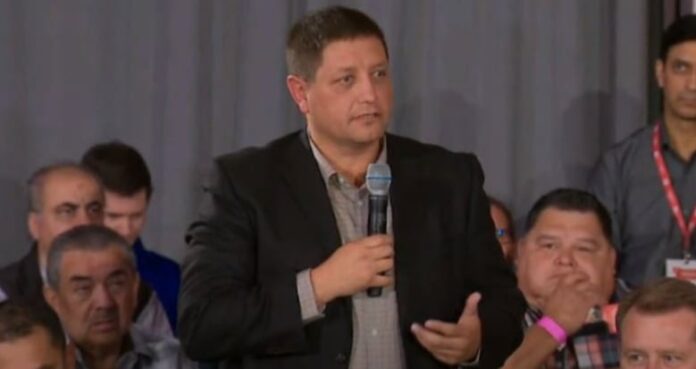 Saskatoon Tribal Council Chief Mark Arcand asked Trudeau to pledge that, should his party form government, it would fully accept the recent Canadian Human Rights Tribunal ruling that Ottawa must compensate all First Nations children taken from their homes and communities through the on-reserve child welfare system.

“I am asking that if this government is re-elected that there is no opposition to that,” said Arcand, during a town hall held in Saskatoon.

Trudeau did not directly respond to the question and instead pivoted to talking about boil water advisories.

“I agree that it starts with investments in the basics, like drinking water,” said Trudeau.

“Far too many communities have been under long-term boil water advisories. If they even have water coming out of their taps.”

Trudeau then spoke about how his government had closed the education funding gap and that now schools on-reserve are funded at the same level as off-reserve, provincially funded schools.

The human rights tribunal released a decision days before the campaign officially began ordering Ottawa to compensate every First Nations child taken from their home and community through the on-reserve child welfare system.

The compensation amount could reach into the billions of dollars.

The federal Liberal government at the time said it would review the decision before stating its intention on whether to accept the decision or take it to the Federal Court.

Tribal Council chief says question was signal to all parties

Arcand told CBC News he was comfortable with Trudeau’s non-answer on his question, given the work the previous Liberal government has already accomplished on the child welfare file, like passing Bill C-92, the Indigenous child welfare bill.

“I feel his response was, I’ll say, under pressure, just because of the fact the envelope that comes with that … is very significant,” said Arcand. “I have no ill feelings toward Trudeau … for not giving me a response.”

Arcand said he asked the question to signal to Trudeau, and other party leaders, that whoever takes power will face strong demands to fully accept the ruling.

“There shouldn’t be any opposition, especially to the wrongs that have been done to First Nations people,” said Arcand.

“There is no right-wing or left-wing in this.”

Conservative leader Andrew Scheer said on the campaign trail that he wanted to review the ruling before making any final determinations on the tribunal’s ruling.

NDP leader Jagmeet Singh and Green Party leader Elizabeth May have both said they would accept the ruling.

Trudeau also seemed to hedge on a direct question on whether a Liberal government would provide statutory funding in connection with Bill C-92, which creates jurisdictional space for First Nations to take over their own child welfare systems.

Funding to create a system would be determined through negotiations between Ottawa, provinces and First Nations which could lead to some getting better deals than others. Or, if they choose to go at it alone, a First Nation could apply to Indigenous Services Canada for funding.

During the consultation phase for the Indigenous child welfare bill, First Nations leaders and advocates from across the country requested that the bill come with statutory funding — funding required by law.

Many expressed disappointment when the bill was unveiled without any funding commitments attached.

FSIN vice-chief says Trudeau will be held to promises

Federation of Sovereign Indigenous Nations vice-chief David Pratt pressed Trudeau to commit to agreeing to statutory funding to go in conjunction with C-92.

Trudeau wouldn’t directly commit to statutory funding, but did promise there would be money on the table for child welfare.

“It is a commitment… we will ensure that Indigenous communities will have the necessary funding and financing in a stable, predictable way, to offer the care and support for their kids, to ensure they are raised in their language, in their culture, in their identity,” he said.

Pratt said he was satisfied with Trudeau’s answers and he would hold him to it, should the Liberal leader get re-elected.

“We are going to hold him accountable to his answers; it’s not like he’s going to get a pass,” he said.

The NDP said in a statement sent to CBC News that it fought for statutory funding during the debate around Bill C-92 and is committed to making it happen.

The Green Party did not respond to a request for comment, but May said during the Sept. 12 leaders debate that her party is committed to funding child welfare services.

The Conservative Party did not respond to a request for comment. Scheer said during the Sept. 12 debate that Ottawa had a  “unique responsibility” to First Nations and “especially Indigenous children both on and off-reserve.”

He said at the time that it was important for the federal government to work in “partnership” with First Nations.

The Liberal Party said it had nothing to add beyond Trudeau’s statements Thursday.

Hundreds march in Windsor to show solidarity with U.S. protests and to honour George Floyd

Planning a Canadian vacation? Some provinces may be off limits. Here’s what you need to know