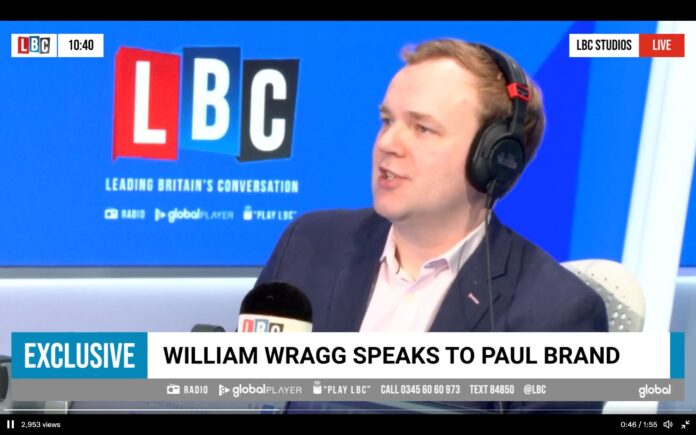 A Tory MP has spoken out about how the toxic world of politics pushed him into a “depressive state”.

William Wragg, who is stepping down at the next election, said you would have to be a “saint or a psychopath” to be entirely immune to the impact of politics.

However, he said he found it “remarkably empowering” speaking out about his mental health.

Earlier this year the MP for Hazel Grove announced he would take a short break from his duties while suffering with severe depression and anxiety.

Wragg was among a number of Tory MPs who called for Boris Johnson and then Liz Truss to resign as prime minister.

The chair of the public administration committee told a joint interview for LBC and ITV News: “I just found that I’d been living on adrenaline for some months as those in political life will, I’m sure, be able to relate to.

“The summer recess came along and the adrenaline went away and that rug is metaphorically, as ever, pulled from under you and you sort of fall.

“I fell into a sort of depressive state, if I can describe it as that.

“Which I think, on reflection, had been building for some time. When you have depression it’s not just the case that you’re slightly glum and things in the world are a bit gloomy.

“It is an overpowering feeling that sort of pulls you and beguiles you in a way.

“Given I’d had it in the past, I thought ‘crikey I know exactly what this is’. So I thought this time, rather than it being a great mystery as to my unavailability or anything else like that, I’d just say it as it is.

“Which I found in itself to be a remarkably empowering thing to do.”

Asked if the state of politics had contributed to his struggles, Wragg replied: “I think inevitably it did.

“When you work in a dysfunctional environment and that doesn’t just have to be politics – it can be any other environment or it could be things in your personal life that might be dysfunctional or anything like that, then it inevitably has an effect.

“You combine that with the particular circumstances of politics, which are the high stakes pressure, the separation that there can be from friends and family, and frankly just the fatigue that comes from being in a permanent psychodrama.

“You’d have to be either a saint or a psychopath to be entirely immune to those effects. And so yes I think inevitably it does take a toll.”

Wragg is among a number of Tory MPs who have announced their plans to stand down.

Former cabinet ministers Sajid Javid and Matt Hancock have both announced they will stand down at the next election.