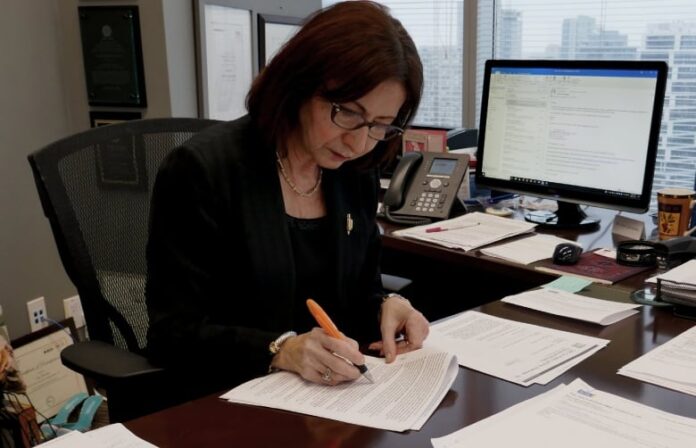 A Toronto lawyer and prominent road safety advocate is pushing Ontario to implement a controversial technology that would allow police to test cellphones at the side of the road to see if drivers are using them behind the wheel.

The device is called the Textalyzer, and the technology is being debated in several U.S. cities.

Its developer, Israeli-based Cellebrite, said the technology would allow police officers to plug a driver’s phone into a device that would analyze if it was being used in a car, and what kind of activity was happening when.

“If a driver was using the hands-free option to talk via their mobile phone, the Textalyzer would also be able to determine that,” the company said in a blog post.

“Much like the breathalyzer, from which the device received its name, its two prime-use cases are for situations where either there is a suspicion of distracted driving or at the scene of an accident.”

The main bone of contention with the Textalyzer is privacy, but Patrick Brown, a founding member of the Coalition for Vulnerable Road User Laws, said Toronto needs this technology.

“We literally are running into a crisis proportion of pedestrians getting hit, struck, killed and hurt,” Brown said. “We don’t always have to be last in safety.”

Brown said he met with Ontario Minister of Transportation Caroline Mulroney about a month ago to talk about vulnerable road user laws, and raised the issue with her.

The province said in a statement that it is continuing to monitor the effectiveness of Ontario’s distracted driving laws, new research and what’s happening in other jurisdictions.

“Any new or enhanced enforcement tools are reviewed as a part of this ongoing monitoring and evaluation process,” the statement reads. Toronto police would not say if the device would be a help in investigations, and instead referred questions to the province.

Ministry officials say they are not currently aware of any Textalyzer-type devices that are ready to use in Ontario — and any new tools would have to be reviewed with law enforcement and other ministries.

“Such a review would include addressing any privacy concerns, as many individuals store personal information in cellphones,” the statement reads.

That’s exactly what worries Ann Cavoukian, executive director of the Global Privacy and Security by Design Centre. “[Phones contain] everything that’s going on in your life,” she said.

Law enforcement agencies regularly use Cellebrite’s software in criminal cases to access files on any number of devices.

“If you want to break into something, you go to them,” Cavoukian said. “That’s why this makes me nervous.”

Cavoukian said she would want to see an independent, third-party audit to verify that Cellebrite can’t access any personal information before even considering implementation of technology like this.

The Textalyzer has been examined in places like New York, Chicago and in the state of Nevada. Privacy concerns have dogged the debate, especially since the technology could be used at crash sites without a warrant.

Jessica Spieker, a spokesperson for the Toronto advocacy group Friends and Family for Safe Streets, dismisses the privacy argument outright.

“It’s total garbage,” she said. “It’s no more invasive than a breathalyzer, and we’ve come to accept breathalyzers as a due matter of course when impaired driving is suspected. All [the Textalyzer] tells you is if you’re distracted by your phone or not.”

Spieker has a vested interest in the idea. She was T-boned by an SUV in 2015 while riding her bike to work in north Toronto.

The 35-year-old personal trainer broke the base of her spine in the crash, and suffered a litany of other serious injuries. Years later, she’s still feeling the effects.

“It’s like a bomb was detonated in my life,” she said.

Considering she had the right of way on that normal, bright morning, Spieker still wonders if the driver was on her phone that day. A device like the Textalyzer could help determine the cause of the crash, she said.

In her own case, closure is elusive.

“Nobody knows why, and she’s not telling anybody why she didn’t see me,” Spieker said. “I would really like to know why this was inflicted on me.”