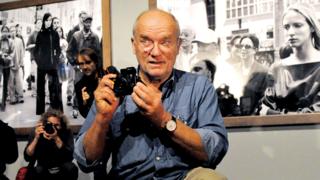 German fashion photographer Peter Lindbergh, whose trademark was the simple and dramatic black and white portrait, has died at 74.

Lindbergh, born in 1944 in Lissa, Germany, worked as a window dresser for a department store before enrolling in the Berlin Academy of Fine Arts in the early 1960s.

He moved to Düsseldorf in 1971 and turned his attention to photography, working for two years assisting German photographer Hans Lux, before opening his own studio in 1973. He moved to Paris in 1978 to further pursue his photography career.

Working in fashion photography, Lindbergh became known for rejecting excessive retouching of images of women, saying: “This should be the responsibility of photographers today, to free women, and finally everyone, from the terror of youth and perfection.”

In 1988, Lindbergh received international acclaim by showing a new generation of models all dressed in white shirts.

Lindbergh has worked with some of the biggest publications, including Vogue, The New Yorker, Rolling Stone, Vanity Fair, Harper’s Bazaar US, and the Wall Street Journal Magazine.

The photo above, showing actress Debbie Lee Carrington dressed as an alien and model Helena Christensen, is from Lindbergh’s 1990 photo series ET Story for Italian Vogue. Science fiction representation and cinematic suspense was an ongoing theme in the photographer’s work. The shoot was later described by the New York Times as the first ever narrative story in fashion photography.

His work can be found in the permanent collections of a number of Fine Arts museums and galleries around the world, including the Victoria & Albert Museum in London and the Centre Pompidou in Paris.

Lindbergh also directed a number of films and documentaries, including Models, The Film in 1991 and Inner Voices in 1999, which won the Best Documentary Prize at the Toronto International Film Festival in 2000.

In 2019, Lindbergh took a series of portraits for the September edition of Vogue magazine, which was guest-edited by Meghan Markle, the Duchess of Sussex.

A tribute on the Instagram account of the Duke and Duchess of Sussex said that there was “no other photographer [Meghan] considered to bring this meaningful project to life.

“His work is revered globally for capturing the essence of a subject and promoting healthy ideals of beauty, eschewing photoshopping, and preferring natural beauty with minimal makeup.”