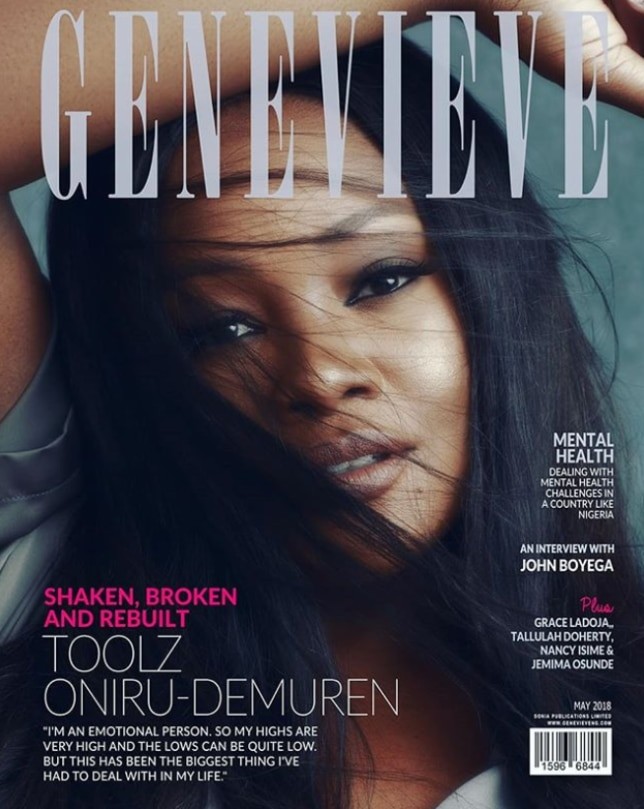 Toolz is finally opening up about the loss of her unborn baby and it is as painful as can be expected, yet it does not come close to the labour pains she describes.

The OAP opened up on the subject which she already revealed was too difficult to talk about, during an interview with Genevieve Magazine.

Toolz stars on the cover of Genevieve magazine

She stated that going through those labour pains, knowing her baby was dead, broke her.

“From the point we found out something was wrong till when the process was over was quite harrowing, but the parts that really broke me were going through the pain of labour knowing my baby was already gone,” the 35-year-old said.

“I also had a mini-breakdown when I had to get a death certificate so we could have a burial. I don’t think I’ve ever cried so much in my life.”

Toolz also revealed that she was confined to a bed in the hospital for a period of time due to the experience which she says left her “shaken, broken, rebuilt.”

However, she noted that the experience “ultimately it strengthened my relationship with God.

“It made me realise how delicate life is, and as much as we say ‘I will do this or that’ it is inevitably down to God’s will. In December I wrote that everyone will go through trying times, you just have to pray for the strength to get through it.

“That’s what God gave me – strength to get through a very horrible experience.”

Speaking of her husband, Tunde Demuren, and describing him as an incredible source of support, Toolz said, “I actually went into labour whilst I was making his breakfast.

“I tried to finish because he is such a big foodie, but the pain was too much and I was bundled off in the ambulance. Maybe it was the gas and air or temporary insanity, but I remember asking the medics to stop so we could get some food for him.

“They thought I was mad. We can laugh about that now. I think this experience brought us closer, and also made us realise how much we love each other. He made me pray, and he didn’t give up till I had emptied my heart out.”

When a foetus dies in the womb before it is born, the syndrome is called intra-uterine fetal death.

In most cases, the death occurs in the third trimester and the mother would have to go through labour to deliver the dead foetus.

Lingerie for plus size women

Toolz recently announced the launch of Sablier, her lingerie line for plus size women.

She said that she wants ladies, irrespective of their body size to be confident in themselves.

“I want ladies, irrespective of their size or body types, to be confident and love themselves, and essentially embrace their beautiful, because beauty is from within and is not dependent on what society dictates,” she added.

ALSO READ: Toolz replies woman who asked why she isn’t pregnant yet

The Popular BeatFM OAP once told City People that she got her ‘killer hips’ from her mum.

All in all, we are glad that Toolz has found a way to move on from her horrible experience.