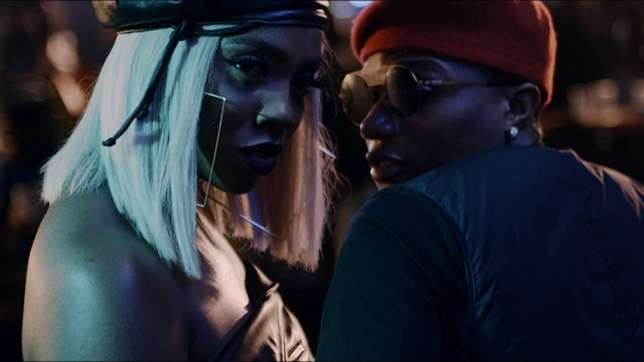 Tiwa Savage has responded to Davido’s telling tweet about her relationship with colleague, Wizkid.

It is no news that there have been speculations about there being more than friendship between Tiwa and Wizkid but Davido’s teasing tweet may have blown the rumours out of proportion.

ALSO READ: Tiwa Savage is about to fly away with Wizkid

Recall that on Friday, May 11, 2018, Davido took to his Twitter page to promote his new song ‘Assurance,’ tweeting:

Shortly after, Wizkid tweeted that he is looking for a sister o!, a phrase which is known to have been lifted off Davido’s hit track which he dedicated to his chef girlfriend, Chioma Avril.

See the exchange below:

On seeing Davido’s response, the mother-of-one also took to her Twitter page to reply to the “FIA” singer.

ALSO READ: A timeline of the more than close friendship between Tiwa Savage and Wizkid

Tiwa Savage poses with the star boy himself, Wizkid

We are not sure what to make of her response but you can be rest assured that it did little to debunk the rumours of a sexual relationship between Tiwa and Wizkid.

Wizkid spotted in a restaurant with Tiwa Savage

Wizkid was spotted at a restaurant in Lagos with the first lady of Mavin records, Tiwa Savage.

The two got into the restaurant and really caused a scene as fans and customers present cheered as they walked into the VIP section of the restaurant.

With trips like this to restaurants, the rumours about the more than close relationship between Tiwa Savage and the ‘Star Boy’ himself will continue to grow. Recall that there have been speculations over what seems like a more than close friendship between this two.