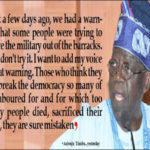 THOSE secretly pushing for a military solution to Nigeria’s problems yesterday got a piece of advice – forget the idea.

All Progressives Congress (APC) stalwart Asiwaju Bola Tinubu warned that any attempt to break the nation’s nascent democracy would be resisted.

Tinubu, who spoke at a joint parliamentary session organised by the Lagos State House of Assembly as part of activities to mark the State’s Golden Jubilee celebration, said the nation had gone too far to allow a military coup to happen again, adding that such a move would be resisted at all cost.

“Amidst the celebration, I will not fail to sound a caution to us all; the precious thing we have, the  democracy that we are now trying to perfect is not guaranteed to us. We must sweat hard, yet think wisely if we are to keep it,” Tinubu said, adding:

“There will always be some people who want to undermine democracy. These people gain more from the government in the dark. Just a few days ago, we had a warning that some people were trying to entice the military out of the barracks. I say don’t try it. I want to add my voice to that warning. Those who think they can break the democracy so many of us laboured and for which too many people died, sacrificed their lives, they are sure mistaken.

“Nigeria has come too far for such a thing to happen. Those people behind such idea will find no fertile ground to plant their seed in Lagos. We will not buy their sad product; whatever they want to sell is a bad product and we are going to reject it.”

To the frontline politician, Lagos at 50 is worth celebrating, considering the state’s achievements in the last 50 years.

But, amid the revelry, said Tinubu, it is important to emphasise the need to create more opportunities for the people.

“We also have realised that we need to do more in order to create more opportunities, better education, improved housing and more jobs for many of our people so that all can witness the full blossom of growth and prosperity,” the former governor said, adding:

“As a state,  we have shown we can do great things to enhance the lives of our people. We have so much more to do we need to do more to create great opportunities, better education and numerous business opportunities in the state.”

Tinubu said achieving this objective requires cooperation between the legislature and the executive, adding that  during his tenure as governor, the interface between his administration and the House was very cordial.

“We succeeded in taking Lagos to an enviable height. We set the agenda for progress and today that progress is being felt because the executive and legislature cooperated. This has continued from Fashola to Ambode. This cooperation does not erode on your oversight responsibility,” he said.

Governor  Akinwunmi Ambode, in his opening remark, said since creation, the state had been a shining example and critical hub of socio-economic and political development.

The harmonious relationship between the three arms of government, which is reflective in the governance model of Lagos State, promoted the interest and welfare of the people, he said.

“Today, we are celebrating the contributions of the Lagos State House of Assembly, particularly the 8th Assembly in the last two years, to the true principles of democratic governance through passage of bills that advance the principle of governance and promotion of social welfare of the people within the ambits of the Law.

“It is on record that military incursion into governance has always made the legislature its first victim by suspending the constitution with all powers against the wishes of our people. Therefore, the legislature can be said to be the most exposed in governance model in the current democratic dispensation, if we have to give its true meaning and relevance in a representative government.”

Ambode added that the first to 8th Assemblies had been the benchmark for assessing legislative business in Nigeria, stressing that the 8th Assembly, in particular, had been highly responsive and innovative in fulfilling its constitutional obligations and meeting the aspirations of the people for the dividends of democracy.

“The superlative performance, in his view, “can be attributed to the quality of leadership that has been produced through a mature and democratic process with the purpose of providing a democratic process that would benefit our people”.

“Over the years, the Legislative arm of government in Lagos State has been a shining beacon of democratic independence and responsiveness. It has never shirked its assigned role or responsibility even in the face of provocation. It has continuously engaged the electorate in the process of making laws through interactive engagements and contributions to the making of Laws,” he said.

Ambode stated that the synergy between the three arms of government, particularly the Executive and the Legislature had become the benchmark of the democratic process in Nigeria. He noted that as the government celebrated the last 50 years of the creation of Lagos State, it had laid the building blocks for the next 50 years.

House Speaker Mudashiru Obasa, in his opening remark, said  it was important to celebrate, considering the various contributions of the parliament towards the state’ssuccess story of the state.

House of Representatives Majority Leader  Femi Gbajabiamila said: It is easy to see an absentee legislator easily win election in the country today because the constituents are more concerned with the largesse from such a politician rather than one with a robust idea that will shape the future of the society.”