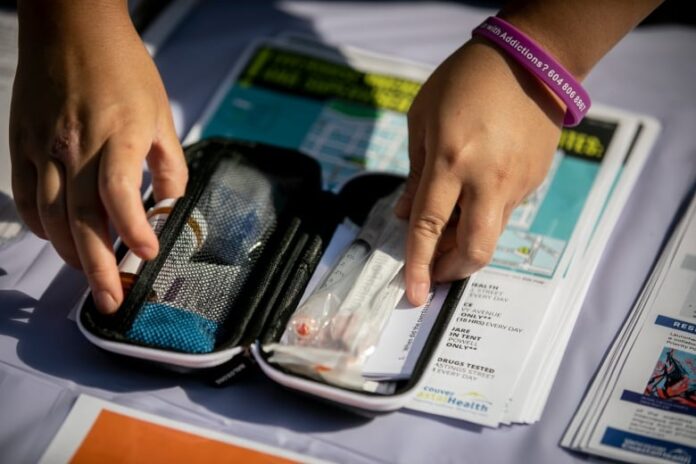 The numbers are only getting worse, and for people like Holly Gauvin and her team on the frontline of the opioid crisis, those numbers are people who are overdosing right in front of them every week.

Gauvin is the executive director of Elevate NWO, a harm reduction agency in Thunder Bay, Ont. She said her staff members saved two lives in one day last week by reversing overdoses, one of which occurred in their office’s washroom.

“That used to be a big deal for our organizations when we would have an overdose, and now it isn’t,” she said, speaking to how common these incidents have become.

There has been a seven-fold increase in opioid-related calls to the Superior North EMS from 2017 to 2021, exploding from 96 calls a year to 729 within that time frame.

Front-line workers are seeing an increasingly toxic drug supply in the community, and overdoses on these substances, like fentanyl and benzodiazepines, often require multiple doses of naloxone to reverse.

That’s why Thunder Bay city council is calling on the provincial government for more help.

During Monday night’s council meeting, councillors unanimously passed a motion to endorse four recommendations to the province coming from the Drug Strategy Network of Ontario, which comprises 41 members including the Thunder Bay Drug Strategy. The network’s four-pillar model is outlined in a document called “Solutions to End the Drug Poisoning Crisis in Ontario: Choosing a New Direction.”

Gauvin said she was “pleasantly surprised” about council’s unanimous vote in favour of the recommendations. She hopes the city continues to support organizations that provide harm reduction services and assist the city’s most vulnerable — like Path 525 and People Advocating for Change through Empowerment (PACE) — and that councillors listen to those with lived experience who can lead the way with solutions.

“Our city is in a crisis right now. This is an emergency and we need the support — and that is something that the province needs to be held accountable to.

“I’m really hoping this council is up to that challenge because it’s no small ask,” she said.

Part of the Drug Strategy Network of Ontario’s recommendations is eliminating structural stigma against those who use drugs. That’s where decriminalization comes in.

“We know that stigma kills people very quickly…the more we destigmatize through actions like decriminalizing certain drugs, the more apt people are to reach out for care when they’re struggling with those things,” Gauvin said.

What she’d also like to see is more compensation and benefits for those on the front lines of the crisis, who she calls emergency service providers. Acknowledging the importance of their work is one thing, but that doesn’t help them pay their bills, nor does it make their jobs any easier, she said.

“My team intervened twice last week and saved two lives. There were seven people involved between the two interventions, and that’s seven people that went home that night sick to their stomachs, knowing that it could have gone the other way,” Gauvin said.

Kristen Oliver is in her second term as the City of Thunder Bay’s Westfort ward councillor. She chairs the city’s inter-governmental affairs committee, and put together the council motion calling for more help from the province.

The resolution from council is also to be forwarded to the Northwestern Ontario Municipal Association, the Association of Municipalities of Ontario, the Federation of Canadian Municipalities, the provincial minister of health and Premier Doug Ford.

Oliver said she wants all of Ontario’s municipalities to put similar pressure on the province.

“I’m talking to mothers and fathers who have lost their children to drug poisoning,” said Oliver. “Their loss is… you just can’t find the words to support them through these times.

“I think that the best avenue forward for us as a city council is to try to lead the charge in getting the support needed for this community.”

The city can’t address the crisis alone. As council tables the 2023 budget — one where a 5.6 per cent tax levy has been proposed — different departments are requesting more resources, and it’s hard to satisfy them all.

“We can’t keep applying this pressure on the municipal tax base because it just is not sustainable,” she said.

With more money from the province, the city can support the people providing harm reduction services – people like Gauvin’s team at Elevate NWO. It could also open a detox centre, attached to the hospital, to reduce the strain on the emergency department, she suggested.

Oliver encourages officials to listen closely to advisory groups led by people with lived experience of addiction when determining how to best use funding. She also recommends more awareness campaigns and investments in youth programming as ways to promote prevention and compassion.

“We’re not doing our community any service by just sweeping it under the carpet,” she said.