‘This is my church’: Residential school survivor skipping papal visit to walk in ancestors’ footsteps 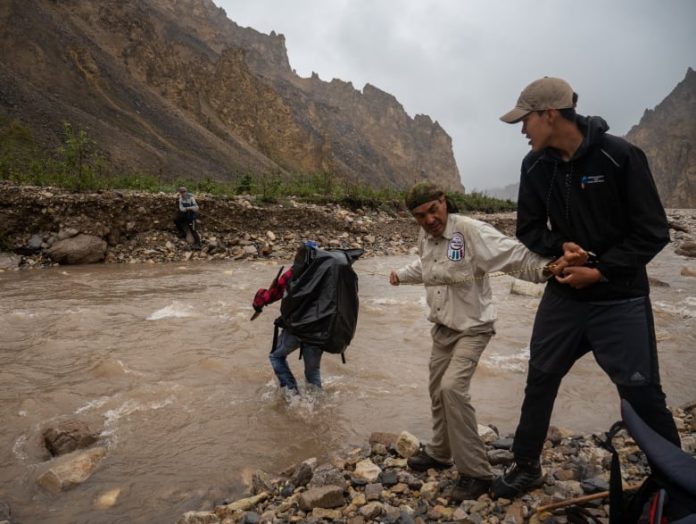 When Pope Francis addresses residential school survivors in Maskwacis, Alberta on Monday, one survivor won’t be in the audience or watching it on a screen.

Instead, Norman Yak’eula plans to be trekking hundreds of kilometres northwest, deep in the Mackenzie Mountains and dense bush of the Northwest Territories, following the ancestral route of the Sahtú Dene and Métis.

“This is my spirituality,” said Yak’eula. “I want to go back to my own church, my own people.”

The church he speaks of is a living one made of animals, trees, water and rock — not the kind he was forced to attend at Grollier Hall, the Roman Catholic-run residential school in Inuvik, N.W.T.

Yak’eula was in the audience at the Vatican in Rome on April 1 when — after a week of talks with First Nations, Inuit and Métis delegations — Pope Francis offered an initial apology for the conduct of some church members at church-run residential schools.

He said the moment was enough to convince him to put a painful history behind him and move forward.

“I don’t need to run after the church and the Pope to say, ‘Say you’re sorry, apologize to me,'” said Yak’eula, a former Dene national chief and Assembly of First Nations N.W.T. regional chief.

“We need to put the past in the past where it rightfully belongs and be who we are today.”

Yak’eula is embarking on the 17th annual Canol Youth Leadership Hike, an event funded largely by the territorial and federal governments for young people selected from Sahtú communities.

“We have to give our youth hope,” Yak’eula said. “This hike is a transformational life experience … They learn to live off the land.”

This year, Yak’eula is leading a group of hikers along 64 km of the 355-km rugged alpine trail — a difficult journey that involves river crossings and wilderness survival skills.

Kallie Hickling was just 14 years old when she completed a portion of the trail eight years ago.

“There was a lot of doubt in myself,” said Hickling, who is back on the hike this year as a volunteer.

“It actually turned out to be one of the best experiences of my life.”

Myles Erb was one of the original youth hikers. He’s been on the trail for more than a decade.

He said that even though he lives in Norman Wells, N.W.T., which is just across the river from the trail, few people from his community use it.

“It seems like it’s within reach, but for some reason the opportunities aren’t there for youth … To say, ‘Hey, that’s something that’s out there for us,'” he said.

Trail littered with remnants of war

The Canol Heritage Trail follows a pipeline route built by the U.S. government following the attack on Pearl Harbour.

In 1942, Dene hunters used traditional Mountain Dene trails to guide the Americans along the route, which connected the oilfield in Norman Wells with the Alaska Highway.

When the Second World War ended in 1945, the Americans stopped using the pipeline and left the route littered with scrap equipment and other wartime remnants.

Yak’eula said it’s long past time for the trail to be cleaned up and it’s up to Ottawa to press the U.S. to get the work done.

A spokesperson for the Department of Crown–Indigenous Relations and Northern Affairs said the U.S. no longer has any responsibility for the trail because it sold its assets to Imperial Oil.

The federal government is focused on cleaning up any dangerous substances but is leaving relics of the pipeline project where they are due to their historical value, said department spokesperson Matthew Gutsch.

“This includes such things as old vehicles, pump houses and other equipment,” he said.

Catching up on education lost at residential school

Yak’eula said that when he walks through the mountains, he feels connected to his grandmother Harriet Wright Gladue, who walked the route herself.

“One day, she told me that I should go into the mountains,” said Yak’eula. “So I said yes, just to make her happy, not knowing what I said to her.”

WATCH | A documentary about the Canol Youth Leadership Hike:

It wasn’t until the early 2000s, when he was in his mid-40s, that Yak’eula made the journey. Since then, he said, he’s been catching up on the education he lost at residential school.

“After 17 years, I’m starting to see a little bit of her wisdom, Yak’eula said.