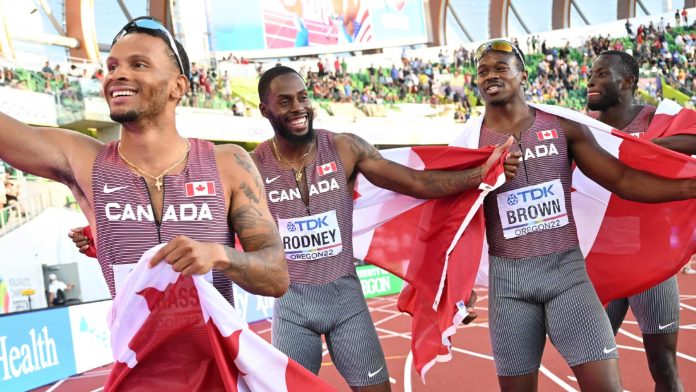 With a boisterous American crowd going crazy for the heavily-favoured U.S. track team at the World Athletics Championships, Aaron Brown, Jerome Blake, Brendon Rodney and Andre De Grasse ran the race of their lives to win gold for Canada.

Their time of 37.48 seconds is the fastest in the world this season and a new Canadian record.

“It means everything. We’ve been talking about this for a few years now. Last year at the Olympics. It feels good to get it here. A lot of Canadian fans here so it almost feels like home soil,” De Grasse said. It’s the first time a Canadian men’s relay team has won gold on American soil since those 1996 Atlanta Games. It also marks the sixth time Canadian men have won a relay medal at the world championships — three gold, three bronze.

The fans at Hayward Field were stunned as De Grasse outran American Marvin Bracy to get to the finish line first — De Grasse threw his hands in the air in celebration.

His effort is even more remarkable considering he had COVID-19 less than a month ago. He chose to sit out the 200m event  — he’s the reigning Olympic champion in that event.

But De Grasse put team and country ahead of any individual aspirations at worlds to ensure he’d be rested for the relay.

“It feels great to end it like this after a rough start. To do it with these guys. It’s an awesome feeling,” he said.

It was a perfectly executed race from start to finish for Canada. Brown blasted out of the blocks, putting the Canadians in a strong position going into the second leg.

The 30-year-old from Toronto was running his eighth race at worlds.

“I trusted these guys. We had the right spacing. I love these guys and I’m so proud,” he said. “I worked so hard this championship and to end it off like this is icing on the cake. I’m so proud of these guys.”

Blake, who is somewhat new to the team, ran an 8.86 to keep Canada out front.

“It feels good. Aaron just said listen for me this time. I got out as hard as I could and when I got the baton I went, that feels good,” Blake said.

“Glenroy told us in our meeting to focus on the checkmark. Go to the middle of the zone as quickly as possible. I was running with a smile on my face at that point.”

And then Rodney, who’s the corner specialist, rounded the bend with speed and strength.

“We’ve been working on the spacing. As soon as I saw Jerome go over that tape I was getting ready. Just a great day,” he said. “Chemistry is everything. We worked hard practicing. My job here at these worlds was the relays. Now we have the whole collection.”

De Grasse then brought it home for Canada, outrunning Bracy. 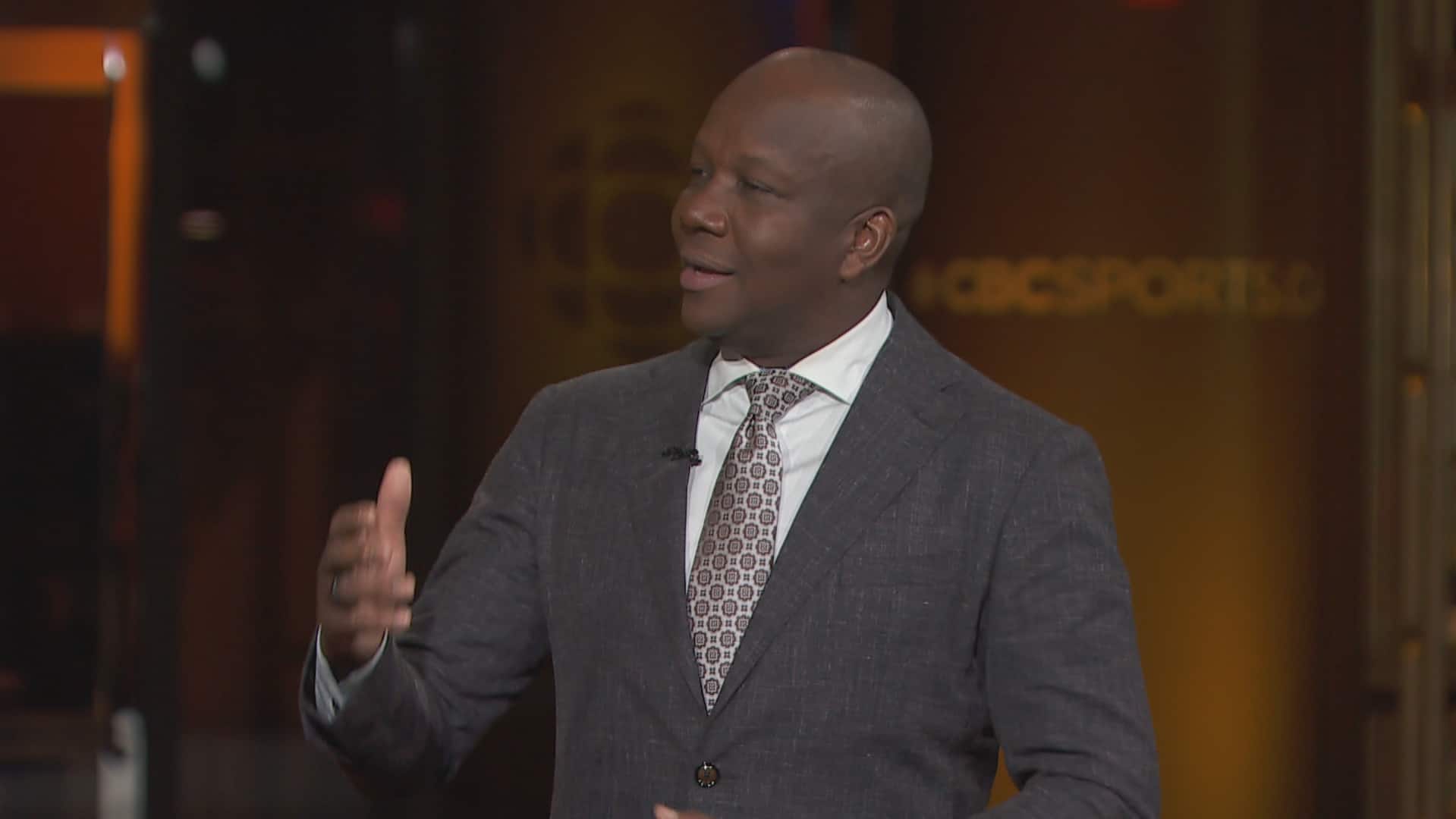 The last time a Canadian men’s team won the relay at worlds was back in 1997 in Athens. Athletics Canada head coach Glenroy Gilbert was part of that mid-90s Canadian dream team that won two world titles and a world bronze, as well as that 1996 Olympic gold.

“In my opinion I think they’re a stronger team than what we were. They’re not just 100-metre guys, they’re 200-metre guys too. Their capacity is much higher. We were primarily 100-metre sprinters,” Gilbert said.

“I’m very proud to work with them and put forth the knowledge I have from over the years. They’ve made it easy.”

Gilbert tested positive for COVID-19 a couple of days ago and had been coaching the team via Zoom. He is currently isolating in Eugene.

He was unable to be in the stadium for the golden race Saturday night, but no doubt played a huge role in the team’s success.

De Grasse, Brown and Rodney were all part of the last Canadian relay team to win a medal at worlds — a bronze medal seven years ago in Beijing.

Blake was part of the team that captured silver in Tokyo last summer at the Olympics.

This Canadian team has talked about the importance of chemistry when it comes to the relay. They felt more prepared and more experienced than the other teams going into the final and it showed on Saturday night.

Gilbert says it’s something they practice every spring during a number of camps and competitions.

“A lot of it is fundamentals and chemistry. All of these guys are talented. If they adhere to fundamentals under pressure they’ll be successful. And the chemistry these guys have is unmistakable,” he said. 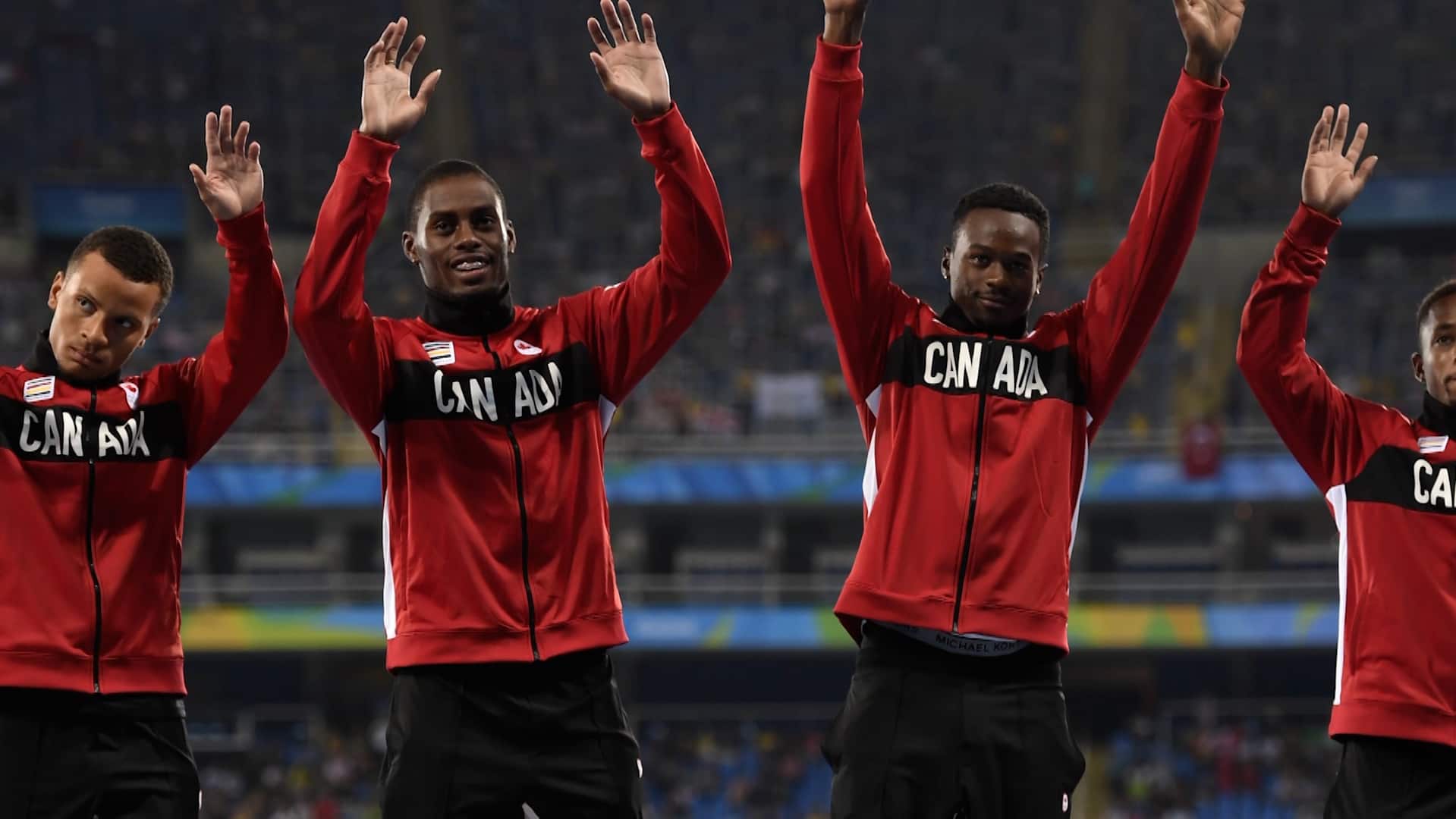 Brendon Rodney and Aaron Brown have won two Olympic medals together on the 4x100m relay team, but their friendship pre-dates the track.