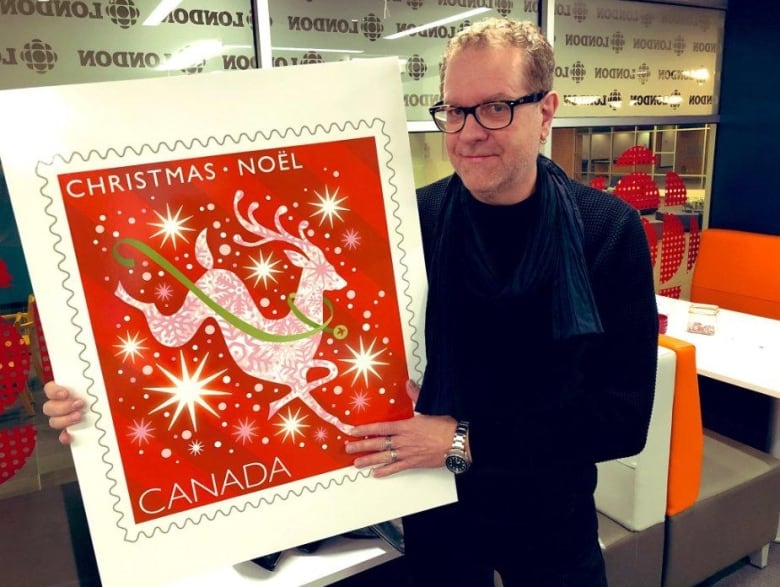 In recent months, London, Ont., has been home to one of Canada Post’s colourful new delivery trucks, emblazoned on either side with the words, “Thanks Merci,” and an assortment of happy symbols.

The vehicle is just one van in a fleet of vibrant trucks that have been delivering mail across the country in psychedelic style. But originally, the design was only supposed to go on a postage stamp.

The creative director and graphic artist behind the design, Andrew Lewis, who lives in London, Ont., said his idea to expand his vision from a coin-sized stamp to a vehicle wrap that would cover a walk-in van was one he didn’t think Canada Post would take seriously.

“I said, ‘Hey, wouldn’t it be funny if you took the design idea here and put it on a truck?'” said Lewis. “I showed them a mock-up of a [truck with the design] as a joke, as something fun, and they sat there and said, ‘Yeah, let’s do it.'”

Now, Lewis’s design project for a limited-edition stamp to thank employees for their service during the pandemic is also travelling on the sides of a fleet of four-wheeled thank-you letters rolling across Canada. The design, he said, is meant to inspire positivity and happiness in the people who see it.

“A lot of people had rainbows in their windows and hearts and things like that last spring and summer,” Lewis said of the symbols he spotted on his walks through London neighbourhoods.

“So I made this fun, kind of psychedelic image because I wanted something really positive and happy, and this is a weird, gloomy and kind of oppressive time.”

Lewis said the decorated vans were originally launched last fall, starting with about six vehicles. Now, he said there are around 40 vehicles on the road. They’re in every major Canadian city and have been getting attention on social media from employees and the public.

While Lewis said he wanted his design to be light-hearted and bring smiles to peoples faces, he also thinks public art should convey a worthy message.

“Artwork that’s circulating in public should have some sort of responsibility,” said Lewis. “It had better be thought-provoking, and not just more visual noise.”