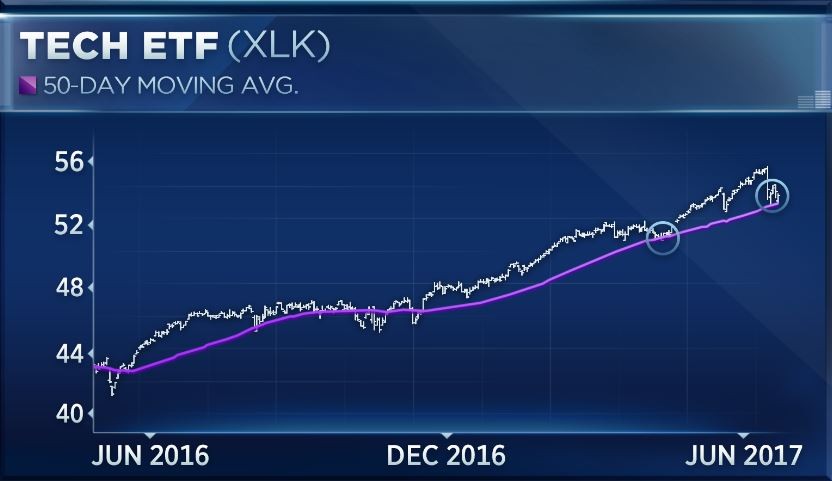 The S&P 500 closed the week essentially unchanged, the Dow Jones industrial average rose slightly and the Nasdaq Composite was just a hair negative. As crude oil turned in its fourth straight week of losses, Miller Tabak equity strategist Matt Maley discusses three key themes he is watching for next week, focusing in on one technical indicator.

Maley pointed out that a popular exchange-traded fund that tracks technology stocks, the XLK, has recently tested its 50-day moving average to the downside. The moving average has acted as “key support” for tech stocks all year, Maley said, “so it will be important that it continues above this line.”

“The tech stocks have attracted a lot of leverage with their uninterrupted rally this year. If the XLK breaks below this line, it will cause some of that leverage to be unwound. This, in turn, could lead to a larger than expected correction in the group,” Maley said Friday on CNBC’s “Trading Nation.”

Emerging markets have so far this year been a popular trade, but may be coming under pressure from recent signs the U.S. dollar is strengthening, Maley said.

“If the dollar continues to rally, this could cause the emerging markets ETF to break below its fifty-day moving average, which has been key support,” Maley said Friday.

A U.S. dollar gaining in value relative to foreign currencies is typically negative for emerging markets, as it pushes down the value of their commodities and raises their dollar-denominated debt. The EEM has gained more than 18 percent this year and closed Friday slightly positive.

Crude oil just turned in its longest weekly losing streak since August of 2015, but one popular energy-tracking ETF may be showing signs of looking up, Maley said.

“There’s been a lot of negative news on the supply and demand equation for crude oil. However, the XLE energy ETF, which has been a good leading indicator for crude oil, outperformed last week for the first time in months,” he said.

If the XLE were to finally break above its 50-day moving average, Maley said, it could be a signal that oil is finding a “bottom” and may head higher from there.