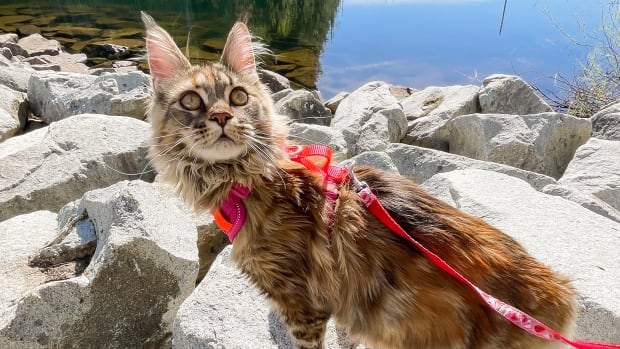 Canadians have embraced the outdoors in droves over the past year-and-a-half due to pandemic-related lockdowns — and their fluffy, tree-climbing, bird-watching feline companions have been tagging along.

These intrepid animals are known as “adventure cats,” as they are put on leashes to explore the outside world with their owners, whether they are hiking, kayaking or even skiing. Many have gained large social media followings in the process; the hashtag #adventurecats on apps like Instagram and TikTok brings up hundreds of thousands of results.

While a cat on a leash is still an uncommon sight, Julie Posluns, who runs an online cat-training school, says she’s seen increased interest in her courses since the start of the pandemic.

“I think the more people realized they were at home, the more they were like, ‘OK, I guess it’s time to just pick up some new home hobbies,'” said the Toronto resident.

Posluns trained her own cat, Jones, to walk on a leash about six years ago and now provides advice to clients on cat backpacks, harnesses and other so-called “adventure cat” essentials.

Chelsea Robinson, a longtime hiker, got her Maine Coon kitten last winter. Within days of bringing her home, she put the cat — named Fig — in a harness and headed to the beach.

“She was enthralled,” she said. “Still to this day, no matter where we go, the beach is her favourite place.”

Fig especially loves to watch the waves crash onto the beach, Robinson says.

Fig and Robinson take walks every day, whether it’s a short walk to pick up Robinson’s children from school, or a several-hour hike through the forest on the weekend.

Fig has been a “bright light” for Robinson throughout the pandemic, she says.

It’s also something she hears from people who follow Fig’s adventures online; Robinson shares photos and videos of their activities on Instagram and TikTok, where Fig has collectively amassed nearly 150,000 followers.

“She brings people a lot of joy,” Robinson said.

Another cat owner, Aleena Fiorotto, says she was “determined to have an adventure cat” when she got her Siberian Forest kitten, Finnegan, last year.

“I can take him anywhere, in any situation, with any type of new animal or anything. And he’s just like, ‘This is fine,'” said Fiorotto.

The duo has even gone kayaking — and while Fiorotto says Finn was a little “leery” of the moving dock at first, he was happy once they pushed off.

“He settled right in and just laid down and took in the sights,” she said.

Fiorotto also shares her cat’s exploits on Instagram, where Finn has more than 21,000 followers.

Having an adventure cat has pushed Fiorotto to get out more than she would solo, she said. She loves to see how Finn engages with the world around him and how he interacts with delighted strangers on the trails.

So you want your own adventure cat?

Some experts say that while cats can benefit from leashed walks, there are several factors that should be taken into consideration before you attempt to do so.

Posluns said a sturdy harness and leash need to be tested on your cat inside the home before you think about going outside, as many cats do not initially like the feeling of a harness. A gradual introduction to it is best.

“I think it’s really important to remember that we’re doing this for our cats’ enrichment first,” she said. “Not to take them on some fun adventure for social media to take pictures — but, like, what is going to enrich your cat’s life?”

Dr. Maggie Brown-Bury, a veterinarian and a representative of the Canadian Veterinary Medical Association for Newfoundland and Labrador, says that leash-walking our feline friends can be an “an excellent way to give them more activity and adventure in their life.”

But she said you need to be in tune with your cat’s body language as you acclimate them to the leash and to the outdoors. Signs that your cat is unhappy being outside include flattened ears, unwillingness to move, hunched bodies and open-mouth breathing — a sign of stress.

“But if they are walking around and sniffing and exploring, then they’re feeling really great,” said Brown-Bury.

And to those who say cats should never be let outside, due to the dangers to local wildlife and the cats themselves? If the cat is controlled by a leash, Brown-Bury says the risks are minimal.

“Having a cat outside in a controlled manner is no riskier for the cat than it would be for your dog,” she said.

If you do plan to take your cat outside, Brown-Bury says, microchip identification is a must, as are shots for parasites and regular deworming appointments.