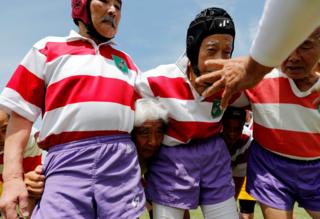 In Japan, which is hosting the Rugby World Cup this month, 150 clubs stage competitive matches for players above the age of 40 – and Tokyo’s Fuwaku Rugby Club has three over-90s.

Ryuichi Nagayama (below left), 86, says: “You tackle and battle each other but the gathering after the play is so enjoyable and fun.

“We talk about how each other plays and no-one gets angry about how we played. The atmosphere is great.”

As a practising doctor, Mr Nagayama is very aware of the risks involved in playing a high-impact sport at his age.

“Since I joined Fuwaku club, I have broken ribs many times and broke my collarbone too,” Mr Nagayama says.

“When I noticed an irregular pulse, I would take medicine to adjust so I can still do it. I can’t stand not playing.

“This may sound strange but I have lost my wife years ago and now I would say I don’t mind dying playing rugby.”

Mr Nagayama can be seen in his home below, praying at an altar for his late wife.

Another Fuwaku player, Tony Hartley, 71, is originally from the UK.

“I was at the Tokyo Sevens and I got chatting to a guy next to me because he had a shirt on that said: ‘Fuwaku Rugby Club since 1948’, which is when I was born, so I was curious,” he says.

“He said he could introduce me to the club, which he did the following week and I have been playing more or less ever since. That was seven years ago.

“I was really surprised because the scene doesn’t really exist in the UK, certainly not at 60 [or] 70. It was a really welcome surprise and a good way of making friends.”