The inclusion of her name in FG’s looters list leads to her reactions, Stella Oduah 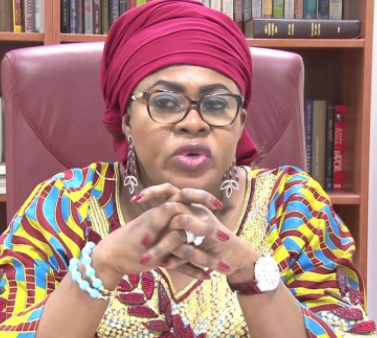 The inclusion of her name in FG’s looters list leads to her reactions, Stella Oduah

Former Aviation Minister now Senator, Stella Oduah, has reacted to the inclusion of her name in the Federal government’s looters list. In a statement released today Sunday April 2nd, Stella Oduah said there is no evidence of corruption against her. Read her statement below…

My attention has been drawn to the illusionary list of looters released by Lai Mohammed in which, by treachery or by happenstance, my name featured.

It is worrisome how a serving Minister could condescend so low in what appeared like a childish altercation to start mentioning names of his alleged looters without verified or verifiable facts, in order to win what he considered a quarrel. In deliberately taking on those he considered prominent in the achievements of the past administration, he mentioned my name against an allegation of a whooping sum of N9.8 billion naira. But for the records, i would have simply ignored him since his notoriety in making false and laughable statements has gained prominence in recent times.

Record has it that my achievements as the Aviation Minister are unbeatable till date. I did not engage in any financial impropriety as the Minister and the allegation involving the said sum of N9.8 billion is not only untrue but laughable. The said contract awarded by the Ministry of Aviation under my watch was executed and based on the request of the contractors, they were paid their money which they utilized in the manner they did. The records are still with the Ministry. I have no business with the companies that took part in executing that contract and till now, I do not understand how anything went wrong over that contract that was executed. I have never taken any illegal proceeds from the government purse. God had since blessed me tremendously before I joined politics in the quest to serve my country and I remain content and grateful to God. The trend of harassing past office holders with false and malicious allegations to score a political point destroys rather than helps the integrity of the anti-corruption stance of the government and indeed makes holding public office very discouraging.

The machines seized/forfeited by the Federal Government over the allegation on the said money are not mine. I challenge Lai Mohammed to provide evidence linking me with his wild allegations. I have been waiting for that evidence and I am yet to see any.

All allegations made against me remain mere media sensations orchestrated for mere political reasons. Oftentimes, I ignore them believing the orchestrators would repent after several failed outings. Mis-using the media and misleading the society through the media at the expense of innocent citizens in order to win a medal is unfortunate and most irresponsible. Governance is not warfare. Calumny is evil.

May God help our country.