The fight to free the Michaels: Canada’s ambassador to the U.S. describes the months before their release 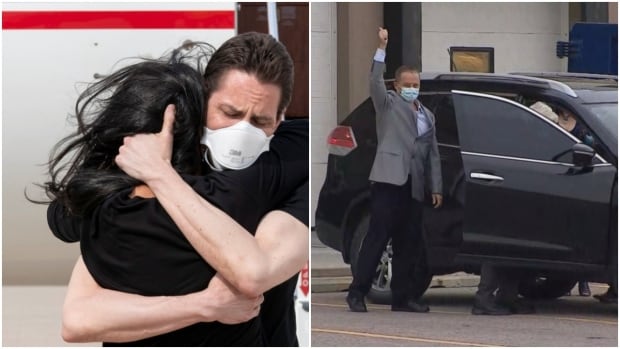 About a month before two Canadians detained in China were flown home in a sudden move that stunned observers of Canada-China relations, Beijing was sending signals to Canadian diplomats that it was moving closer to a resolution on the file.

Kirsten Hillman, Canada’s ambassador to the United States, said the shift by Chinese officials was matched by increasing international pressure to resolve the cases of Michael Spavor and Michael Kovrig.

“I think it became clear to China that they wanted to put this behind them because it was just going to get worse and worse if they didn’t resolve this matter.”

Spavor and Kovrig were arrested in China in December 2018, just days after Chinese tech executive Meng Wanzhou was arrested in Vancouver on a U.S. extradition warrant.

Kovrig and Spavor were released just hours after Meng resolved her American legal case through a deferred prosecution agreement. That ended the extradition case against Meng, who had been on house arrest in Vancouver. She boarded a plane for China that same day.

Hillman has been working at the Canadian embassy in Washington since 2017. She said she raised the case of the two detainees in virtually every meeting she had with the American administration and other decision-makers over the past two and a half years.

“There wasn’t a single conversation of consequence that I had where I didn’t put this matter on the front burner,” she said.

Hillman said, however, that she never had direct contact with Merrick Garland, the U.S. attorney general, and that no “quid pro quo” was reached to release Spavor and Kovrig in exchange for Meng.

Hillman described what she called “a coordination” on the detainees’ file. By late summer, when it appeared that officials in Beijing were warming to the idea of releasing Spavor and Kovrig, she said she was also hearing that a deal between Meng and U.S. justice officials was getting closer.

Few details have been released about the sorts of diplomatic conversations that took place between Canada, China and the U.S. in the weeks and days before Sept. 24, when Spavor, Kovrig and Meng all boarded flights to their respective homes.

Hillman said that while she understands the strong public interest in the affair, there’s a strategy behind the limited information that’s been made public.

“The relationships that we built, in particular in Washington and Beijing, that allowed us to bring this all together, they’re very important,” she said.

“We have to maintain the trust of those people who helped us get to the place where we could bring the Michaels home safely. We need to protect (these relationships) because we have channels of communication that need to remain open, to solve other problems and deal with other issues.”

Meanwhile, others Canadians — such as Uyghur-Canadian Huseyin Celil — remain imprisoned in China. Hillman said his case is one that needs to be discussed through those “important” international relationships.

The leaders of Canada, the U.S. and China will all meet face-to-face during the upcoming G20 summit in Rome at the end of the month.

Hillman said the imprisonment of Spavor and Kovrig will have an impact on China’s conduct in the future.

“I think China has understood that the act that they took vis-a-vis the Michaels has galvanized international condemnation of this tactic. I think that mattered,” Hillman said.

“Can I say they’d never do it again? I certainly wouldn’t want to speculate. But there’s no question in my mind that they understand that this behaviour has led to sustained and serious condemnation of the international community.”