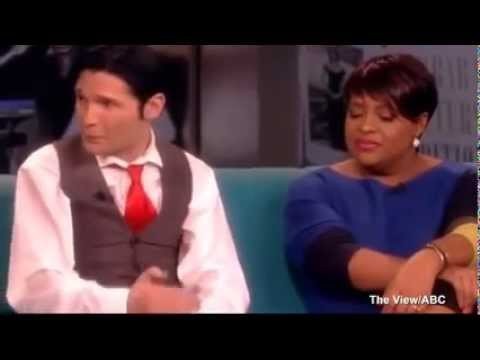 A years-old clip of actor Corey Feldman on “The View” has resurfaced in the wake of the sexual misconduct allegations against Harvey Weinstein, and people on Twitter are hailing Feldman for spotting the problem long before anyone else.

“There are people that were the people that did this to both me and Corey that are still working, they’re still out there, and that are some of the richest most powerful people in this business,” Feldman says in the 2013 clip. “And they do not want me saying what I am saying right now.”

“Are you saying they are pedophiles and that they are still in this business?” then-host Barbara Walters asked. “Yes,” Feldman replied.

Feldman later said in the video that parents who want to put their children in the industry should do so carefully, without “naïveté.”

“You’re damaging an entire industry,” Walters told Feldman. TheWrap reached out to Walters’ rep for comment and did not immediately hear back.

After the video resurfaced over the weekend, Feldman tweeted clarification that the man who sexually abused him as a child was not Weinstein.

HOWEVER 4 THE RECORD I WOULD LIKE 2 SAY NO HARVEY WEINSTEIN WAS NOT THE MAN WHO MOLESTED ME OR MY FORMER ACTING PARTNER. OBVIOUSLY PEDOS

Watch the 2013 “The View” clip above, and see reactions below.

RESPECTIVE CAREERS & OPPORTUNITIES BACK! WHAT A BEAUTIFUL PLACE HOLLYWOOD COULD BE AGAIN! OK BACK 2 WORK! C U TOM IN FRESNO!#ANGELIC2THECORE

Corey you have been vindicated, and this is just the tip of the iceberg-you spoke truth when nobody else would! Such courage!(((HUGS)))

You were the first person I thought of when the HW article hit & people started telling their stories. Thank you for always speaking out

I remember this & how poorly Feldman was treated for having the guts to come forward. Shame on those who bullied him & ignored the problem. Make no mistake, #HarveyWeinstein is a Monster. So are those who tried to wreck Feldmans acting career. https://twitter.com/corey_feldman/status/918882411286368256 …

@Corey_Feldman goes too show you just who buttered her bread???

I saw that interview years ago. My heart went out to you then, and my first instinct was hug you then find the pervert and hurt him. What you did took courage, and you have never backed down.

@Corey_Feldman Hero of mine since I was a kid. Just saw that interview again, you had it spot on and I hope the world knows the truth now

@Corey_Feldman been reading about everything. No one listened to you back then. I hope you’re okay now. Be safe okay.

Also Read: Kate Winslet Glad She Never Has to ‘Deal With Harvey Weinstein Again as Long as I Live’

RESPECTIVE CAREERS & OPPORTUNITIES BACK! WHAT A BEAUTIFUL PLACE HOLLYWOOD COULD BE AGAIN! OK BACK 2 WORK! C U TOM IN FRESNO!#ANGELIC2THECORE

You are a real Hero. Thx Bro

@Corey_Feldman Thank you for standing up for what’s right in this increasingly toxic world. We need more men like you pushing back #realhero

@Corey_Feldman is a true victim. I always believed him. Lots of predators in Hollywood, hopefully a big name perv gets arrested. @LAPDHQ

I’m glad that this is finally being taken seriously. I pray that real action is taken & that all who have suffered find healing. God bless