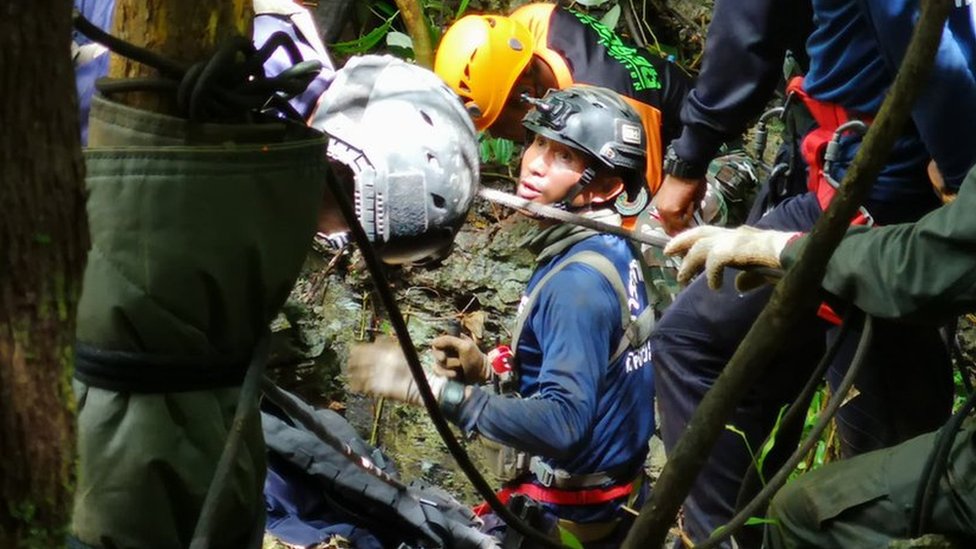 Last Saturday, 12 young boys went to explore a cave with their coach after football practice in northern Thailand.

Their bikes were found abandoned at the entrance and shortly after, heavy rain sent torrents of water through the cave.

Over the past week, rescuers have been mounting an increasingly desperate search, in the hope the group are alive deep inside the cave but trapped by floodwaters.

Here’s what the operation, in the jungle-covered hills around Chiang Rai, involves:

Thai navy divers been trying to access the deepest caverns of the Tham Luang Nang Non cave, the fourth longest in Thailand.

Four top British cave divers, along with some US military personnel, also joined the efforts.

The divers are swimming through tiny spaces and cannot risk going too far into flooded passages or they risk running out of air.

The search has been frustrated by rushing water and near darkness inside the cave. Debris and mud leaves divers with almost no visibility; they can only see a few centimetres in front of them.

It’s been described as like swimming through cold coffee.

Powerful industrial water pumps, put in place to reduce the water level inside the cave, have struggled to combat relentless rains. With the entrance flooded, pumping was halted on Thursday and divers forced to stop their search intermittently.

Rescue efforts shifted to finding other ways to access – and reduce water in – the cave.

That has involved drilling through rock to drain water, so the divers could resume the search – although the thickness of the cave’s wall has made this difficult.

Another option would be to drill into the cave to create a new route to try to reach the boys.

But finding an area on the densely jungle-covered and muddy mountainside for the heavy machinery required, while ensuring surrounding rock does not collapse, makes the idea of drilling a hole to access the cave an impractical one.

Other technology has aided the massive human search effort which includes the military, police and hundreds of volunteers.

Drones equipped with thermal cameras have been flown over Tham Luang to detect possible access points. An underwater robot was deployed to send information back on the water depth and condition of the cave.

No technology exists to scan for people deep underground.

There are plans to send cameras down to try to work out the next step and potentially to make contact with the missing group.

The animals have helped survey teams investigate the area above the cave complex, which is several kilometres long, searching for possible ways in. The dogs were brought to the site after smelling clothing belonging to the missing children, news agency AFP reported.

Relatives of the missing have camped outside the cave since they went missing on 23 June. Thailand’s Prime Minister Prayuth Chan-Ocha arrived at the site to speak with them on Friday.

Dozens of “survival boxes” containing food, maps and mobile phones were to be sent into the cave on Friday, according to the police.

They plan to drop the boxes into any openings they find in the limestone rock on the mountains above the caves, and, if they do not find the missing boys, to float them on underground rivers in the hope they might reach them.

A police team was able to descend one such hole, discovered by two of the British caving team, and discovered a large chamber, which may take them into part of the cave complex

Police Col Kraiboon Sotsong told reporters the boxes contained a message telling whoever found it to float the box back out.

“The note says: ‘If received, then reply and show on the map where you are. Everybody will quickly help.”

When they are found, the operation to get the group out of the cave will be long. Experts say it could take weeks, if they are found alive, to bring them to safety.

Earlier in the week local officials said rescue teams were preparing to train the boys and their coach to use scuba gear, in case they had to dive out through flooded areas of the cave.

But navigating their way out would be incredibly difficult and it’s more likely food and supplies would be sent in while work continued to find another entrance.