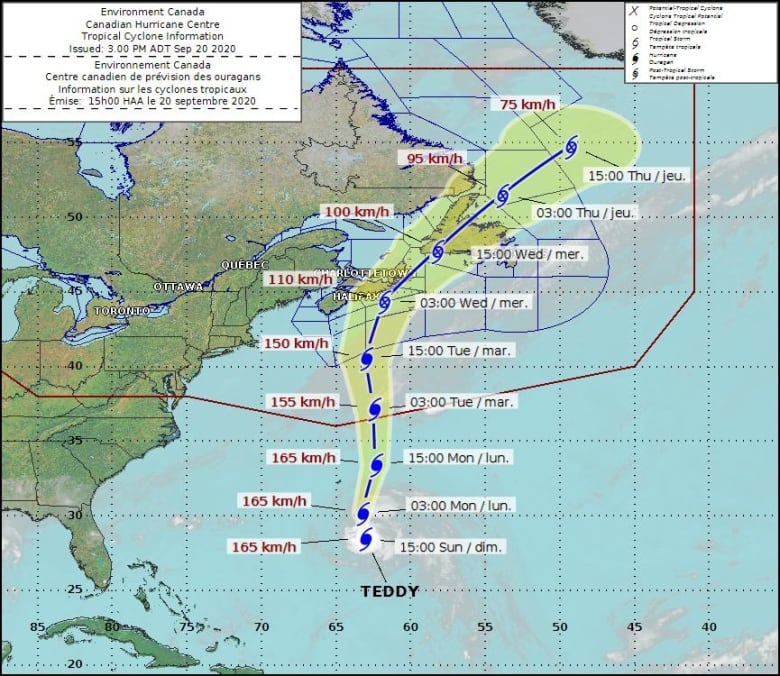 As the final weekend of summer comes to a close, many people across the Atlantic provinces are preparing for the first hurricane of the season to make landfall in what’s been a very active season.

Environment Canada issued a tropical storm watch for all counties along the southern shore of Nova Scotia on Sunday afternoon, while a tropical cyclone statement was issued for the remainder of the province, all of Prince Edward Island and parts of Newfoundland and Labrador ahead of Hurricane Teddy’s anticipated arrival on Tuesday.

Bob Robichaud, a meteorologist with the Canadian Hurricane Centre, said the hurricane has been downgraded to a Category 2 system as it begins to pass to the east of Bermuda Sunday.

He said it is expected to advance north over the next two days and approach the coast of Nova Scotia on Tuesday, bringing strong winds and heavy rain.

The hurricane track currently extends east of Halifax to offshore of Cape Breton. The track could potentially continue to move east by Wednesday.

“All that area is still at play for the storm to actually track,” Robichaud said.

The strongest winds are expected to hit right of the storm track, landing offshore of Nova Scotia before moving toward Newfoundland.

But he said most of Nova Scotia and Prince Edward Island will still experience strong wind gusts.

Wind gusts could reach about 90 km/h along the coast of Nova Scotia, creating the potential for large waves to hit the coast by Tuesday afternoon. The rest of Nova Scotia should expect winds up to 60 to 90 km/h.

“Those winds should not be damaging winds,” Robichaud said. “There could be a few power outages but not necessarily damaging, certainly not compared to what we saw last year [during post-tropical storm Dorian].”

Robichaud said heavier rainfall will move through central and eastern parts of Nova Scotia late Tuesday and into early Wednesday with estimated rainfall amounts of 50 to 100 millimetres.

“Round 1 of the heavy rain and gusty winds will arrive on Tuesday [but it] looks like we’ll see a brief lull overnight before Round 2 arrives with the centre of Teddy on Wednesday,” Snoddon said.

Post-tropical storm Teddy will reach Newfoundland on Wednesday and residents of the southwestern area of the province can expect high winds and possible storm surges along the coast.

Robichaud said the hurricane is tracking east of New Brunswick, but it is likely the southeast area of the province will get 20 to 30 millimetres of rain while the rest of the province may see no rain at all.

The Canadian Hurricane Centre is expected to provide another update at 1 p.m. Monday as the path of the hurricane is subject to change.

Nova Scotia Power said it opened its emergency operations centre at noon on Sunday to prepare for possible power outages.

“Based on the recent weather forecasts and the tropical storm models, we will be opening the Emergency Operations Centre on Sunday to ensure proper plans are in place and crews and contractors are secured in advance of potential storm impacts,” Matt Drover, Nova Scotia Power’s storm lead, said in a news release on Friday.

“We are taking every precaution and will be ready to respond to Hurricane Teddy.”

The centre will provide coordination for outage restoration and work with the Nova Scotia Emergency Management Office.

Nova Scotia Power describes their plans for the upcoming hurricane set to hit N.S. on Tuesday 2:25

Paul Mason, its executive director, said the office has also been working with the fuel industry, telecommunications and all levels of government to prepare for the impacts of Teddy.

“What that’s meant, of course, is sharing information [and] ensuring that required assets are prepositioned [and] that specialized personnel can either be mobilized within the province or in some cases brought in,” Mason said.

He said the office has also been working to ensure that required personnel and assets can be made available in a safe way during the COVID-19 pandemic.

“Based on the discussions we’ve had with those partners and the predictions that we have at this time, we feel we’re well positioned to respond.”