Tears, laughter and lots of hugs as 170 Ukrainians arrive in New Brunswick 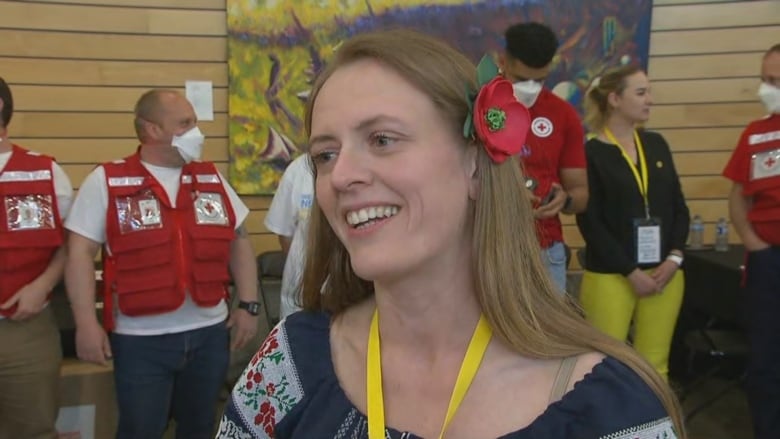 It was the day that 170 Ukrainians, including two members of her own family, were scheduled to arrive in New Brunswick, fleeing the ongoing war in their homeland.

“I was half crying and half laughing,” said Haidash, of the Ukrainian Association of Moncton.

“I’m just so overwhelmed with everything.”

The flight touched down in Moncton shortly after 4 p.m..

The Ukrainians were greeted on the tarmac of the Greater Moncton International Airport by representatives from the New Brunswick government, including Premier Blaine Higgs, Lt.-Gov. Brenda Murphy, and Arlene Dunn, the minister responsible for immigration and for Opportunities New Brunswick.

It was a hectic scene inside the terminal, where the newcomers first met the hosts who will help house and settle them in their new country.

Representatives from Opportunities New Brunswick handed out information packages about the province to the adults and goodie bags with colouring books, crayons and snacks to the kids.

Higgs said it’s a big day not only for the newcomers who are fleeing the war in Ukraine, but for the province as well.

“We’re happy that we can do our part, and we’re happy to see 170 people arrive today,” said Higgs.

“Whether they permanently make New Brunswick home, [or are] able to go back to their homeland, we certainly want to have them realize they’re here for as long as they want to be and need to be.”

To say it was a big day for Haidash may be an understatement.

Her niece and sister-in-law were two of the people on the flight.

They have visited Moncton before, but a return visit was postponed, first by the COVID-19 pandemic and then the war.

“I haven’t seen them in three years,” said Haidash.

Jenny Strelkov of Fredericton was on hand to welcome her mother, sister-in-law and niece into Canada.

“I think it’s the most happiest day of my life.”

Translating for her family, she said they were thankful for all the help they received in coming to Canada.

Olena Panchenko and her son arrived from Odesa.

She said it’s been a long wait to arrive in New Brunswick, but she’s happy she’s here now — although the reception may have been more than they were expecting.

“We’re shocked because so many people met us here,” said Panchenko.

“It’s incredible. We didn’t expect such support, such help.”

Multiple partners are working with the province to make sure the newcomers integration in the province is a successful one according to a release from Opportunities New Brunswick.

Spokesperson David Kelly said that in selecting the 170 people, the province focused on those who had friends or family in New Brunswick, as well as people who have had a job offer, or “fit our labour market needs.”

“Many do have jobs lined up, others we are connecting with our Working NB offices and will be assisting them in finding employment,” he said in an email.

The Ukrainians who arrived Tuesday are part of an immigration program led by the federal government, which expedites the applications of people actively fleeing the Russian invasion of Ukraine. People arriving through that program can work and study in the country for three years. At the end of their stay they can also apply for permanent residence.

Recently, the program was updated to include one-time, non-taxable financial assistance of $3,000 per adult and $1,500 per child.

Most of the Ukrainian newcomers will be relocating to Moncton, Saint John and Fredericton.

Higgs said some who are arriving may need to stay with host families while they look for housing.

That’s why the province is asking people interested in hosting a family to email ukrainesupport@onbcanada.ca to “be linked with the nearest settlement agency.”

Kelly said the province is linking all of the newcomers with settlement agencies “in order to make sure they have a safe landing in N.B.”

Because of how quickly people are getting approved entry to Canada, some have been taking to social media to find hosts.

Carol Ailles started the Facebook group Atlantic Canada Hosts for Ukrainians when she was first touched by the story of displacement in the Eastern European country. In just a few months, the group gained 9,000 members, including Ukrainians, their families and local people offering everything from accommodations to clothing donations.

“As a host you’re going to try to give them some stability, an opportunity to become comfortable where they’re living. So you just try to think not what you want, but what do they want. What do they need,” she told Information Morning Fredericton.

Ailles, who lives in Saint John, said the people would need help not just getting their documents in order, but also finding a place to live and learning the lay of the land. She said her Facebook group connects people, but is not affiliated with any settlement agencies.

Kathryn Melvin, the general manager of Newcomer Connections at the YMCA of Greater Saint John, said any Ukrainians arriving in the city are welcome to access the Y’s services, including getting help with school registration, taking language classes, and setting up social insurance numbers and bank accounts.

She said local hosts are also invited to use their services, whether they connected with a family privately or through the agency.

“We have a lot of the systems and connections in place,” she said.

Ailles picked up her own Ukrainian guests from Halifax last week and has prepared a room in her house for them.

“[It’s] nice if there’s at least separate rooms for parents and kids … in most cases you share a kitchen and bathroom.”

Ailles said people often have a three or four-day journey to get to New Brunswick, and likely need time to rest and get things sorted out when they arrive. Having clothing and food ready for them, and helping them apply for a medical card, would take a big weight off their shoulders for the first few days.