Take a walk through P.E.I.’s prehistoric past 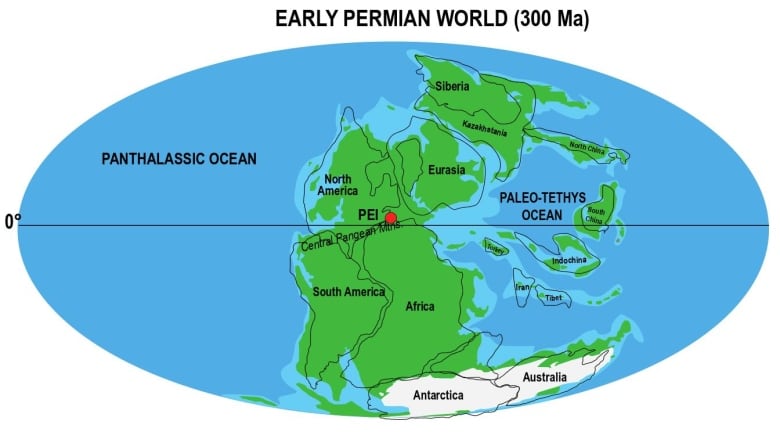 Buried in the iconic red sandstone cliffs of Prince Edward Island is a story millions of years in the making.

As more rock is exposed due to costal erosion, P.E.I.’s prehistoric past is being revealed layer by layer.

Back in 290 million BC, when the world was connected in a single super continent, known as Pangea, P.E.I. was right near the centre.

Welcome to the Permian period, a time millions of years before dinosaurs roamed the Earth.

“All of Prince Edward Island is formed of red sandstone, mudstone conglomerate, as well as clay stone that was deposited during the Permian period — about 300 million years ago,” geologist Laura MacNeil said.

She is the founder of Prehistoric Island Tours, which offers tours of what MacNeil calls P.E.I.’s most significant fossil sites.

MacNeil even discovered the first set of Dimetrodon footprints on the island, in 2018 in P.E.I. National Park.

To help understand the province’s prehistoric history, she walked us through some of the fossil finds and their known history.

It may look like a pile of rocks, but MacNeil estimates this is one of P.E.I.’s largest known fossils still in place.

It’s the roughly 10-metre fossilized remains of a Walchia tree.

Meet the tree that lived on P.E.I. 300 million years ago

Geologist Laura MacNeil walks us through P.E.I.’s prehistoric past and shows us a fossilized tree found along the shoreline. 1:44

“It is one of the earliest coniferous trees in the rock record,” MacNeil said. “This tree doesn’t have any of the remaining tree material in it. It’s been completely replaced by minerals.”

She says the Walchia had adapted to the climate of the Permian period in the interior of Pangea.

“As the continent started to assemble, the climate really started to change,” MacNeil said.

“The climate was getting hotter and drier, and plants didn’t really like this. So they had to adapt and evolve, and this is what led to the evolution of the coniferous trees.”

A cast of the first fossil found on P.E.I. is a teaching tool used in a University of Prince Edward Island biology classroom — the partial remains of a Dimetrodon skull found in 1845.

“This is probably Prince Edward Island’s most famous fossil, and it has a really interesting history to it,” MacNeil said.

Farmer Donald MacLeod was digging a well near New London, P.E.I., when he unearthed part of an upper jaw, including several sharp, curved teeth.

Learn more about P.E.I.’s first fossil found back in 1845

A farmer was digging a well in 1845 and found P.E.I.’s first fossil. We learn a little more from geologist Laura MacNeil about the creature that called the area home 300 million years ago. 1:44

“To kind of put it in perspective how long ago this was, the term dinosaur had only been coined four years earlier,” MacNeil said.

The farmer sold the fossil to the Academy of Natural Sciences in Philadelphia, so it could be examined by Joseph Leidy, one of the only paleontologists studying animal fossils in North America at the time.

The find and story of the Dimetrodon skull was honoured with a Canada Post stamp in 2016.

During the Permian period 300 million years ago, P.E.I. was located near the equator.

MacNeil said the climate would have been very different than today, with the nearest ocean being about 500 kilometres away.

The iconic red cliffs of P.E.I. hold clues to the island’s prehistoric history

The layers of sandstone on P.E.I. can reveal glimpses of the creatures and plant life that existed 300 million years ago. Geologist Laura MacNeil tells us how. 2:13

“Ferns were the main ground cover back in the Permian period here on Prince Edward Island, and their fossils have been found here as well as on the west coast of P.E.I.”

MacNeil said a lot of the trees found at that time would be unlike the trees of today.

The iconic cliffs on P.E.I. are made up of sedimentary rocks — with sediments such as sand and mud deposited in layers.

“To give you an idea of how long these rocks take to form and how much time is represented here in the cliffs,” MacNeil said, “about one inch is equal to about a thousand years in time. So this entire cliff face that I am beside right here represents tens of thousands of years in time.”

One fossil  is near and dear to MacNeil’s heart. It’s one she discovered herself along the shores of P.E.I. National Park in 2018.

“The very first Dimetrodon footprints ever found on Prince Edward Island,” she said.

“We were very lucky with these footprints because they had just freshly broken off of the cliffs, and so luckily we were able to contact the right people, get them into the right hands and make sure that they were collected safely.”

The fossils found in P.E.I. National Park are being safely stored at the park’s Greenwich Interpretation Centre, which has a climate-controlled room.

WATCH | Step back in time with these Dimetrodon footprints found on P.E.I.:

Step back in time with these Dimetrodon footprints found on P.E.I.

Geologist Laura MacNeil found these footprints in P.E.I. National Park in 2018. She explains more about what they show and what to do if you find some while exploring the island. 2:20

“The room was fairly empty five years ago,” said Kerry-Lynn Atkinson, landscape ecologist with P.E.I. National Park. “There have been a lot of recent finds.”

They are kept there so that researchers can find them, but plans are in the works to be able to put them on display at various P.E.I. National Park sites.

“These fossils belong to Canadians, and that’s what Parks Canada is here to do, is to protect nationally significant examples of natural and cultural heritage for all Canadians — and we want to be able to present the information and fossils appropriately,” Atkinson said.

That includes the National Park General Regulations, which prohibit the removal of natural objects — including fossils.

“The important thing is that if a fossil is found, we ask that people take a picture of it in order to kind of get an idea of where the site may be,” she said.

“Record any of the site details and report that information to Parks Canada as soon as possible. That way we can collect it safely and ensure that all Canadians are going to be able to learn from what we’re finding in our national parks.”

Elsewhere on P.E.I., people can report a discovery to the provincial archeologist by email at archaeology@gov.pe.ca or by phone at 902-368-6895.