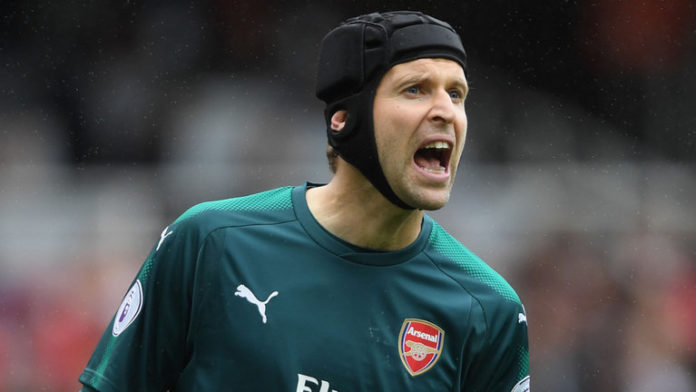 Petr Cech’s calamitous error helped Swansea to a shock 3-1 victory over Arsenal at the Liberty Stadium.

Nacho Monreal (33) continued his excellent goalscoring form, giving the Gunners the lead but Swansea, who beat Liverpool in their last league outing, hit back straight away through Sam Clucas (34) to go in level at the break.

The hosts were given a helping hand on their way to all three points when Cech hit an attempted clearance straight to Ayew, and the 26-year-old had the easiest of finishes to give his side a much-deserved lead.

Wenger sent on Henrikh Mkhitaryan for his debut and used Olivier Giroud from the bench, despite speculation surrounding his future, but it was Clucas who put the finishing touch on Swansea’s superb night, sweeping home from close range after poor defending to send the hosts out of the relegation zone for the first time in three months

Man of the match: Sam Clucas

In tricky conditions, Swansea made the brighter start and Alfie Mawson looked set to open the scoring in the eighth minute after meeting Nathan Dyer’s cross at the far post, but Aaron Ramsey’s last-gasp block got Arsenal out of jail.

The Gunners needed another perfectly timed sliding tackle, this time from Mohamed Elneny, to deny Clucas, who was bearing down on goal after being played in by Leroy Fer. There were shouts for a penalty from the hosts but referee Lee Mason rightly waved away the appeals with Elneny getting a clear touch on the ball.

Arsenal struggled to get going as an attacking force but they were in front in the 33rd minute when Mesut Ozil picked out the run of Monreal at the far post, and the full-back poked the ball past Lukasz Fabianski and into the back of the net to net his fourth Premier League goal of the season.

Swansea were unlucky to be behind but they struck back immediately as Mawson’s through ball picked out the run of Clucas, and the midfielder swept the ball past the onrushing Cech.

Swansea were unchanged from their 1-0 victory over Liverpool just over a week ago. Meanwhile, Arsenal made one change from their 2-1 win over Chelsea in the League Cup with Aaron Ramsey replacing the ill Jack Wilshere. New boy Henrikh Mkhitaryan was named on the bench along with Olivier Giroud, who has been linked with a move to Chelsea.

Arsenal were more assured at the start of the second half but all their improvement was undone when Cech’s awful clearance went straight to Ayew, who made no mistake from close range to roll home his fifth goal in nine games.

Giroud, who could be set for a move away from the Emirates on Deadline Day, and new signing Henrikh Mkhitaryan were sent on in a bid to rescue the Gunners, but Swansea should have extended their lead when Shkodran Mustafi’s poor header picked out Dyer and the forward’s shot struck the outside of the post from 14 yards.

Swansea did get a third as Ayew burst past Mustafi and the excellent Clucas reacted first to beat Cech at the near post to complete a brilliant night for the hosts.

Swansea have won consecutive Premier League games for the first time this season.

Arsenal have accrued 13 points from their 13 away games this season; only in 2005/06 had they won fewer points on the road at this stage of a Premier League season (12).

Arsenal have lost 15 points from winning positions this season in the Premier League; only Watford have dropped more (16).

Monreal has netted four goals in his 21 Premier League games this season, after managing just one in his previous five top-flight campaigns with Arsenal (134 games).

Since his Premier League debut in September 2013, Ozil has registered 49 assists, five more than any other player.

Ayew has been involved in more Premier League goals for Swansea than any other player this season (five goals, two assists), with all seven of his goal involvements coming in the second half.

Man of the Match – Sam Clucas

All three of the midfielder’s top-flight goals for Swansea have come against Arsenal, and have come with his only three shots on target for the Welsh side in the Premier League.

It was not just his goals that caught the eye though as he produced a brilliant performance from midfield. He was a thorn in the side of the Arsenal defence all night and his work rate epitomised everything good about Swansea’s performance.

I know Arsenal had the majority of the possession but Swansea’s gameplan worked to perfection. When they went 1-0 down it was a little bit harsh because Arsenal hadn’t really threatened to that point. It was their first attempt on target and the key to the whole performance was how quickly Swansea got back in the game. They got the equaliser within 60 seconds and you could see the belief that it gave the stadium and the players. They stuck to their gameplan.

They were fortunate to go in front because Petr Cech pretty much handed it to them on a plate, though Mustafi didn’t do him too many favours with the backpass. Arsenal brought on Mkhitaryan a minute before that goal, but he didn’t have any impact on the game and Arsenal didn’t make Fabianski make a top-class save. It was just not good enough from Arsenal in terms of chances created.

Premier League Arsenal rally to mark Wenger landmark with Swansea win Arsenal celebrated Arsene Wenger’s 800th Premier League game as manager with a win but only after coming from a goal behind to beat Swansea City 2-1 at the Emirates Stadium on Saturday.
https://wowplus.net/premier-league-arsenal-rally-mark-wenger-landmark-swansea-win-arsenal-celebrated-arsene-wengers-800th-premier-league-game-manager-win-coming-goal-behind-bea-2/
https://wowplus.net/phil-neville-deletes-twitter-account/