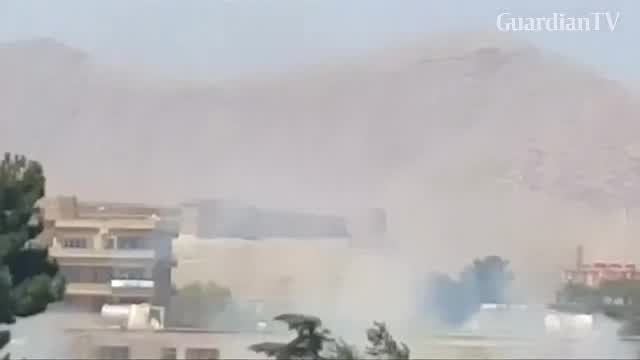 Afghan security personnel inspect the site of a suicide attack outside a bank near the US embassy in Kabul on August 29, 2017. A suicide bomber blew himself up on a busy shopping street near the US embassy in central Kabul on August 29, killing four people and injuring several others, officials said. It was the latest in a series of deadly attacks to hit the Afghan capital, and comes three months after a massive truck bomb ripped through the same area, killing about 150 people./ AFP PHOTO / SHAH MARAI

A suicide bomber blew himself up outside a bank in the Afghan capital Kabul Tuesday, days ahead of the Eid holiday, killing five people and injuring several others in an attack claimed by the Taliban.

It was the latest in a series of deadly attacks to hit the city and comes three months after a massive truck bomb ripped through the same area, killing about 150 people.

The bomb went off outside the Kabul Bank, which usually pays the salaries of security forces personnel and government employees.

The Taliban later claimed responsibility on social media for the bombing.

The blast happened Tuesday morning at a time when many officials were expected to be collecting their salaries ahead of this week’s Eid al-Adha holiday.

It shattered the bank’s exterior, mangling metal beams and covering the street outside with shattered glass and splattered blood.

“I was driving when I heard a big boom. The blast was so strong that it broke the windows of my car. I saw people shouting and crying near the bank,” a witness told AFP.

The blast occurred on a street lined with shops and banks leading to Massoud Square, near the United States embassy and Kabul’s diplomatic area.

Taliban insurgents are currently at the peak of their summer fighting season, and have launched several deadly assaults around the country in recent weeks.

The blast resembled a Taliban attack in June during the Muslim holy fasting month of Ramadan, when a car bomb targeted civilians and government employees queueing outside a Kabul Bank branch to collect their salaries in Lashkar Gah in Helmand province.

That blast killed 29 people and wounded over 60.

Since NATO forces ended their combat mission in Afghanistan at the end of 2014, Afghan troops and police have struggled to beat back the resurgent Taliban, while facing the growing threat of the Islamic State group.

Deadly assaults
It was the latest explosion to rock the war-weary Afghan capital, and comes a week after US President Donald Trump committed US troops to the country indefinitely.

On May 3 a powerful blast targeting a foreign forces convoy near the US embassy and NATO headquarters killed at least eight people and wounded 28 during morning rush hour.

Later in the month a massive truck bomb tore through Kabul’s diplomatic quarter, home to the presidential palace and a host of foreign embassies, killing about 150 and wounding around 400 people, mostly civilians.

And on June 3 seven people died when suicide bombers attacked the funeral of a protester who was killed the day before during a demonstration against insecurity in Kabul.

After Trump paved the way for more US forces to be sent to Afghanistan the Taliban, which ruled the war-torn country from 1996-2001, vowed to turn it into a “graveyard” for foreign forces.

Afghan authorities welcomed Trump’s decision, while in neighbouring Pakistan officials batted away claims by the US president that Islamabad continued to harbour militant sanctuaries.

Earlier this week Pakistan postponed a visit by a US diplomat who had been due to arrive Monday.

It later announced talks with China’s special envoy on Afghan affairs at which the Chinese official “lauded Pakistan’s contribution and sacrifices made in the fight against terrorism”, according to a statement.

IS insurgents have also carried out a number of deadly attacks in Kabul recently.

On Friday they claimed a suicide bomb and gun attack on a Shiite mosque that killed 28 worshippers.

They also killed two in an attack on the Iraqi embassy earlier this month.