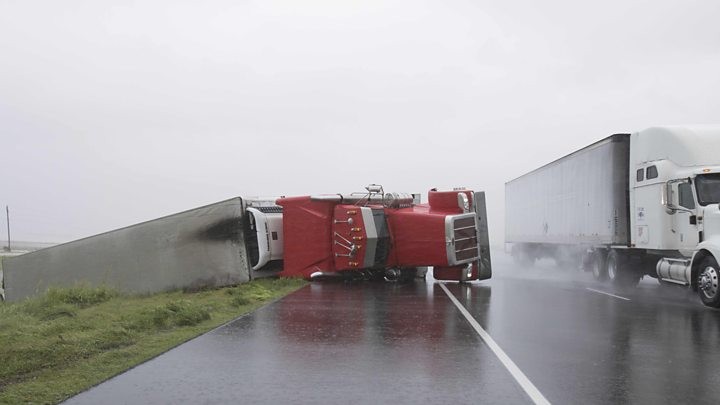 More than 1,000 people have been rescued in flooded parts of Houston, as Tropical Storm Harvey continues to batter Texas with heavy rains.

There is a “flash flood emergency” across the Houston Metro area, with travel near impossible, the National Weather Service (NWS) says.

It noted reports of five fatalities in the Houston area, but only one has been confirmed there so far.

Governor Greg Abbott has said that severe flooding is his main worry.

The NWS in Houston and Galveston said that it had recorded 24.1in (61.2cm) of measured rain in the past 24 hours.

Flooding in the Houston area is expected to worsen and “could become historic”, with “potentially significant flooding also expected in other saturated areas of south-east [Texas]”, the forecaster says.

Two deaths have so far been confirmed from the storm:

Rescue efforts are being hampered by strong winds and thousands are without power. The US Coast Guard in Houston has requested more helicopters as more people ask for help.

Governor Abbott has mobilised 1,800 military personnel to help with rescue and repair operations

Mr Abbott said another 40in of rain could be due before the storm subsides midweek.

Houston is one of the most populous cities in the United States, with 6.6m people living in the metropolitan area.

The weather service has issued flash flood emergency warnings for many counties in south-eastern Texas.

In some places, storms are producing rainfall of 4in to 6in per hour, it said in the early hours of Sunday local time.

“Many creeks, rivers and bayous have flooded and have surpassed previous flood record levels.”

Travel in the Houston area “is severely hampered if not impossible”, it said, advising people to move to higher ground amid “an extremely dangerous and life-threatening situation”.

“Over 1,000 high-water rescues have been performed and in some places emergency crews cannot reach the worst hit areas,” it said.

Residents were warned not to try to travel unless “fleeing an area subject to flooding or under an evacuation order”.

Harvey began as a major category four hurricane – the first to make landfall in the US in 13 years when it arrived late Friday – but was downgraded to a tropical storm later on Saturday.

It is forecast to meander across south-east Texas until Wednesday.

President Donald Trump said he would travel to Texas “as soon as that trip can be made without causing disruption”.

In another tweet, he said: “Good news is that we have great talent on the ground.”