Steve Bannon may be out, but the ‘alt-right’ says their movement will continue 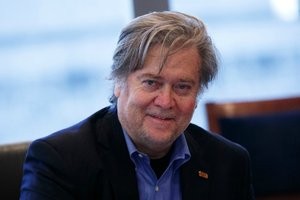 Stephen K. Bannon thought he’d only serve a year as the president’s chief political strategist. Rumors of his imminent sacking arose every few weeks. In April, the rumor that he’d be plucked off the National Security Council actually proved true.

But even with the news Friday that the key Trump adviser was out of the White House , the leaders of the “alt-right,” which Bannon elevated and then denounced, predicted that their movement would continue.

Bannon’s detractors thought they knew what he believed. They pored over books he praised, especially the 1973 anti-refugee book “The Camp of the Saints.” They shuddered at how he called the news site he will return to lead, Breitbart, a “platform for the alt-right,” with verticals on “black crime” and paranoia about unchecked immigration.

Milo Yiannopoulos, a former Breitbart editor whom Bannon helped turn into a transgressive campus celebrity, said “time will tell whether the Trump administration will drift into turpitude without Steve around.”

“Steve is far more dangerous and powerful outside of the White House now. And I think he will be happier, too. I can’t wait to see Bannon the Barbarian viciously crush his enemies from whatever perch he believes he will be most effective from,” Yiannopoulos said.

For Democrats, the removal of Bannon isn’t enough. In statements Friday, Democratic lawmakers were sure to bring up the president’s comments on the violence in Charlottesville, and mention that the Trump administration still included Attorney General Jeff Sessions and immigration policy adviser Stephen Miller.

“Steve Bannon’s firing is welcome news, but it doesn’t disguise where President Trump himself stands on white supremacists and the bigoted beliefs they advance,” said House Democratic Leader Nancy Pelosi.

“A Nazi sympathizer, Klan defender, and supremacist protector should not be President of the greatest country in the world,” said Rep. Al Green (D-Tex.) in a statement, who was first to introduce articles of impeachment against Trump.

No member of Trump’s administration worried liberals as much as Bannon. They shared photos of the strategist looking particularly unkempt. The Onion portrayed Bannon as a ghoulish fairy tale villain, with a headline announcing that he had burst “into millions of spores” upon his departure.

“I conceived him as your friend who breaks out the Ouija board at the seance,” Atamanuik said. “He was the guy who came up with theories about aliens building the pyramids, because he could not entertain the possibility that they were built by black or brown people. I think we did something accurate without knowing it — we had Trump being scared of him.”

Progressive activists were genuinely scared of him. The first #FireBannon signs appeared at rallies the day after Trump’s presidential victory. At some rallies, the chant “No Trump, no KKK, no fascist USA” was altered to squeeze in a mention of Bannon. The chants never went away, and this week, many of the post-Charlottesville protests and vigils featured calls for Trump to fire Bannon.

The progressive group Daily Action organized at least 44,000 calls to the White House demanding Bannon be removed; Color of Change, which has organized advertiser boycotts of Breitbart and other news sites, got close to 100,000 people to sign anti-Bannon petitions.

“His record made him such a clear figure of what Trump’s policies would mean for people,” explained Rashad Robinson, the executive director of Color of Change. “We wanted to say to members of Congress, who were seeking to treat this administration as normal, that they’d be held accountable for doing business with people like this.”

The success of those left-wing protests left a bitter taste for Bannon’s alt-right defenders. As the Bannon news circulated on Reddit and 4chan forums, Trump fans veered between rationalization (“He will return to Breitbart in a civilian capacity in order to fight in the culture war”) and depression (“Why would you contact a leftist columnist and give an unsolicited interview in which you kill your reputation and give the media an angle on you?”).

Vox Day, an alt-right activist and science fiction author, argued that Bannon’s enemies had missed the real reason he was terminated. Bannon’s nationalism, for all the hate it drew, put him on the opposing side of neoconservatives — the war hawks that the left used to hate.

“He’s not a bureaucrat, and the kind of strategic advice he offers Trump can just as easily be provided from outside,” Day said. “My one concern is that this could mean that the military interventionists are going to get their way in Syria, Venezuela and North Korea. I suppose we’ll find out soon enough.”

Mike DeBonis contributed to this report.