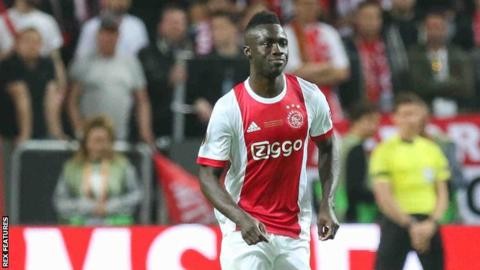 Tottenham have signed defender Davinson Sanchez from Ajax in a reported club record £42m deal, subject to a medical and a work permit.

The Colombia centre-back has agreed a six-year deal and will be the Premier League club’s first summer signing.

“I am very excited to be signing for such a famous club as Tottenham Hotspur,” said Sanchez, 21.

“I am looking forward to working with [manager] Mauricio Pochettino and the players and meeting everyone there.”

He added: “I would like to thank the coach, management, players and fans of Ajax. It is a great move for me to come here to develop my career.”

Tottenham boss Pochettino said on Friday he wants four new recruits before the end of the transfer window and “expects the club to sign more players”.

Earlier in August, defender Danny Rose spoke of his frustration at Spurs’ lack of signings, telling the Sun that the club needed to add well-known players and “not ones you had to Google”.

He later issued an apology for the “ill-judged” comments, which was accepted by Pochettino.

Sanchez is a top player. His performance in the Europa League final, when he came up against Manchester United’s Marcus Rashford, was pretty special.

Spurs have got someone they can mould and turn into what they want. My only worry is has it got a little feeling of him being a replacement for Toby Alderweireld, if contract negotiations don’t go too well?

I hope not. I hope it’s maybe Spurs shifting to a back three, with Jan Vertonghen, or maybe he’s a squad player that makes them even stronger than they are.

Also, it just shows the strength they have in the transfer market, picking out the top young individuals in Europe. And that they want to go and play for Spurs is brilliant.