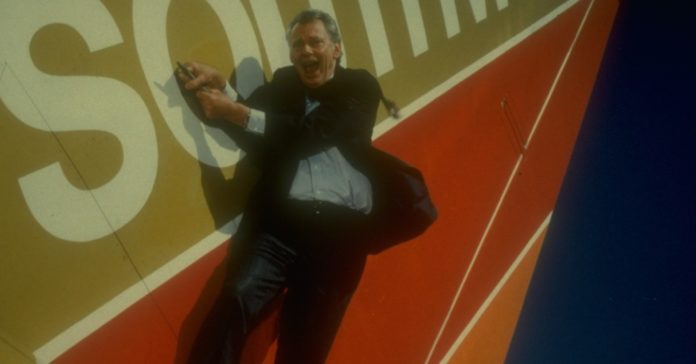 Herbert D. Kelleher, who co-founded Southwest Airlines and brought low fares and no-frills air travel to the masses, died at the age of 87, the airline said Thursday.

Kelleher, a New Jersey-native and lawyer, founded Southwest in 1967 with pilot Rollin King, to provide short-haul flights in Texas, an idea they sketched out on a cocktail napkin. The airline’s first flight took off in June 1971.

The airline eschewed frills like meal service, opting instead for its signature roasted peanuts. Kelleher was conservative with company spending and once joked that “our pilots have accused me of predicting 11 of the last three recessions,” according to the book “Nuts! Southwest Airlines’ Crazy Recipe for Business and Personal Success.”

“Herb was a pioneer, a maverick, and an innovator,” the company said in a statement. “His vision revolutionized commercial aviation and democratized the skies. Herb’s passion, zest for life, and insatiable investment in relationships made lasting and immeasurable impressions on all who knew him and will forever be the bedrock and esprit de corps of Southwest Airlines.”

The airline operated and still flies one type of plane: Boeing 737s. The planes have only one class of service, and the simplified low-cost model Kelleher pioneered was copied by other airlines, several of which Southwest outlived.

“His vision for making air travel affordable for all revolutionized the industry, and you can still see that transformation taking place today,” said Southwest’s CEO Gary Kelly in a statement. “He inspired people; he motivated people; he challenged people — and, he kept us laughing all the way. He was an exceptionally gifted man with an enormous heart and love for people — all people.”

“Herb was a legendary business and leader, a civic titan and, most importantly, an ardent defender of the Federal Reserve System and it’s independence,” said former Dallas Fed president Richard Fisher.

“Smart, innovative, funny — and a bit out of his brilliant mind,” Jack Welch, the former CEO of General Electric said of Kelleher. “I loved him. He was, to me, an American business hero, in that he elevated his people to heights they never imagined they could reach, changing an industry for the better in the process.”

Southwest expanded throughout the country with daring marketing campaigns and a now-dated image of flight attendants dressed in hot pants and go-go boots.

“He was big, brash funny and wickedly smart,” said Henry Harteveldt, a former airline executive and founder of Atmosphere Research Group, a travel industry consulting firm. “Herb pushed the airline to expand across the country.”

Even today, Southwest has maintained a relatively simple product. It has steered clear of many of the tactics its competitors have used to drum up revenue, such as baggage and date-change fees, or segmenting cabins into numerous classes of service.

Kelleher was Southwest’s executive chairman from March 1978 to May 2008 and its CEO from September 1981 through June 2001. Kelleher stepped down from Southwest’s board in 2008.

He was born March 12, 1931 and raised in Haddon Heights, New Jersey. He attended Wesleyan University and New York University School of Law.

Kelleher is survived by his wife, Joan, three of their four children and several grandchildren.

Breaking news: An Amazon driver had odd instructions when she dropped off a package off. The moment went viral.