Southern leaders to Osinbajo: Protect our people in the North 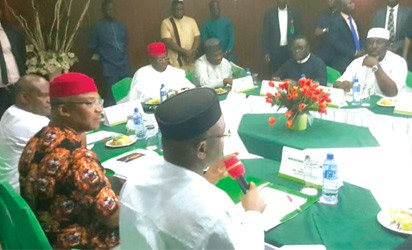 By Emeka Mamah, Gbenga Oke & Dennis Agbo
LAGOS —Ahead of the October 1 deadline given the Igbo to relocate from the North, Southern leaders, yesterday, tasked Acting President Yemi Osinbajo to unfold actions and plans by the administration to protect southerners living in Northern Nigeria.

Leaders from the three southern geopolitical zones met in Lagos just as Southeast and South-South governors entered into another meeting in Enugu, to articulate common positions on issues. Eight of the 11 governors from the two regions had arrived as the meeting got underway last night.

A cross section of South-East and South-South governors at a meeting in Enugu, yesterday.

The southern leaders, who met in Lagos, comprising mostly former office holders, also warned that an attack on any southerner would be seen as an attack on all southerners, just as they tasked the Federal Government to push the implementation of the recommendations of the 2014 National Conference.

The leaders also lamented the proliferation of Fulani herdsmen settlements in the south and asked the Federal Government to take actions to check their activities.

Speaking to newsmen at the end of the meeting last night, Horsfall said Southern leaders were unhappy that up till date, no action has been taken by the Federal Government against the northern youths who gave quit notice.

He said Acting President Yemi Osinbajo must inform Nigerians the actions and plans the federal government has made to protect southerners living in the north.

He said: “We are disconcerted that up till now, no action appears to have been taken  regarding the October 1 threat issued by Arewa youths who threatened the Igbo living in the north. We, therefore, demand that the Acting President, Yemi Osinbajo inform Nigerians of what actions and steps that have been taken to protect the Igbo and all Southerners who live in the North against the threats of the Arewa youths. We reiterate that any threat or action against anyone from the South will be treated as a threat or action against all Southerners.”

The forum also stated that the FG should as a matter of urgency implement the recommendations of the 2014 National Conference, saying it is the only positive solution that is feasible and can solve the country’s problems.

He said: “We note with gratitude the statement by the Acting President that the issue of restructuring will be addressed soon and we urge him to follow his statement with immediate action by acting on the recommendations of the 2014 National Conference.

“The issue of restructuring and change was an integral part of the All Progressives Congress (APC) manifesto.

“We want the 16-point agenda that was submitted by the South-South delegation submitted in their meeting with the Acting President to be acted upon immediately to avoid youth restiveness and sustain the current peace.

“For the avoidance of doubt, restructuring is a return to the Constitution at independence which our founding fathers bequeathed to us. That Constitution allowed the states autonomy in the management of their affairs.

“The states will be federating units with their own rights to have their own constitution. The states will have control of resources and make agreed contributions to the Federal Government for general services.

“We will identify those areas of our constitution which should allow for effective administration in the states.  “It is important that action be commenced immediately to ensure that the entire changes are implemented by December 2017.”

The forum also noted what it described as the menace of armed Fulani herdsmen and the proliferation of Fulani armed settlements in the South.

Three governors, including those of  Edo, Delta and Abia states were still being awaited as at the time the meeting started at Nike Lake Resort Hotel at about 7: 45pm.

In his welcome address , host Governor, Ifeanyi Ugwuanyi, expressed happiness that the meeting was coming at a time when the eastern railway corridor was excluded from the national railway network to be constructed with a $5 billion loan from Chinese Exim Bank.

Ugwuanyi said, at the last South East leaders meeting that centred on  separatist agitation, they voted for a restructured but united country and hoped that yesterday’s meeting will adopt the same position.

“This meeting is not only an epochal reunion but home coming for all of us  including Edo and Delta states which were in former Mid Western region.

“This meeting will fundamentally help us to understand and set a common regional agenda.

“It is against this background that this meeting  becomes not only providential but essential as both South East and South-South cooperation will engender economic prosperity.

“Working together, we stand to gain our due share from the country. As at today, only nine per cent of power generated is allocated to both Southeast and South-South and tourism is under-developed.

“I believe that progressive ideas will flow as we progress in this meeting, that there will be a dawn of new era arising from the new cooperation between the South-South and the south east,” Ugwuanyi said.

Chairman of South South Governors’ Forum and Governor of Akwa Ibom State, Mr. Udom Emmanuel, noted that since it was an inaugural meeting, a chairman will emerge at the end of the deliberations.