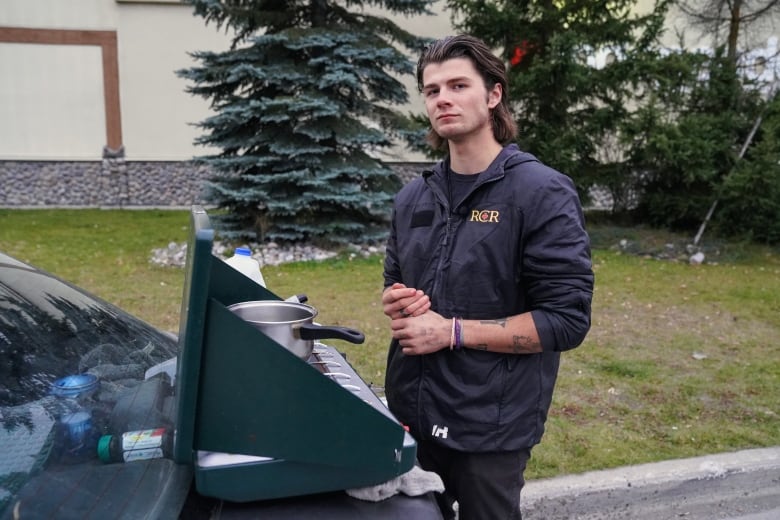 Ski season has just started, but some seasonal workers in Fernie, B.C., say a lack of available housing means they’re struggling to put a roof over their heads.

Alexis Gaudreault, a 21-year-old Montrealer, works at Fernie Ski Resort, where he is paid minimum wage to make artificial snow, sometimes for 12 hours a day.

But instead of heading to a warm home at the end of his shifts, Gaudreault packs up the inside of his car to sleep for the night — a routine that has gone on for three weeks now.

He says he’s unable to find housing that fits within his $500-a-month budget.

“I search on the Internet every day for one to two hours. It’s either too expensive or it gets knocked down too quickly,” he said.

The trunk of his car serves as his kitchen counter. The city’s aquatic centre is where he showers. And the back alley of a grocery store is where he parks his car for the night.

“It is not easy. It’s cold. You feel alone in your car [and] with winter coming, it will be touchy,” he said.

It’s not just the young Quebecer struggling to find shelter. Several workers in the ski town are either sleeping in their vehicle, at a youth hostel or on an acquaintance’s sofa with the hopes they will receive a positive response from one of the Facebook groups dedicated to finding accommodations.

Sabrina Larrivée will be working as a maid at a lodge this December and considers herself lucky she was able to find a home. After two months of digging and only finding rooms over $1,000 a month, the 23-year-old is residing in a $750 bunk bed that she shares with an Ontarian.

“I saw several people sleeping in their cars. It’s worrying,” she said.

Phil Gadd, a real estate agent in the area, says the average price for a single-family home has increased by 19 per cent in one year, and 48 per cent in four years.

“In Fernie, we currently have 14 single-family homes for sale. The average normally is around 40 to 50. There’s a chronic shortage of houses for sale right now,” he said.

“A lot of people, you know, took advantage of the seller’s market and sold their homes, and a lot of these homes being sold were homes that were used for rentals.”

According to the last Housing Needs Report by the City of Fernie, rental rates have increased for temporary seasonal workers, resulting in many living in crowded situations.

Locals who live in Fernie year-round are suffering too.

Leanne Gascon, 48, had to leave the house she had occupied for seven years with her daughter in August.

“The owner wanted to sell it,” she said. “It took me three months to find another place.”

Gascon, who is the head of a small business that cleans Airbnb properties, says there’s another culprit for the lack of housing in the city.

“It’s the fault of the Calgarians who buy all the houses. Of my 50 [Airbnb] clients, 42 are from Calgary.”

The single mother is now afraid of being forced to leave her home again next year.

Brad Parsell, CEO of the Fernie Chamber of Commerce, admits that these housing difficulties, coupled with recruiting challenges, pose a real danger to Fernie’s 600 businesses.

“Front-line workers are essential to ensure the best possible experience for tourists,” he says.

Businesses, such as Tim Hortons, had to close their doors for several days this summer due to lack of staff.

This has prompted some companies to take the lead and provide accommodations for their employees.

After closing for several days in the summer due to lack of personnel, Claude Perreault, owner of the Bridge Bistro, spent more than $500,000 on a condominium.

He says starting next May, he will house three employees there year-round for a modest rent.

“It’s going to be positive for both parties,” he said.

According to her, one solution would be for the ski resort, the biggest employer during winter, to commit to adequately housing its seasonal staff.

“We have been in discussions with Fernie Ski Resort for years. This would reduce the pressure on our rental market,” said Qualizza.

But Matt Mosteller, spokesperson for Resorts of the Canadian Rockies — the company that owns that ski resort — says it’s not that easy to set up.

“We don’t own land in the community or City of Fernie. So we also think that the solution is going to be multi-pronged,” he said.

“We are working together with stakeholders in the community and the City of Fernie, Chamber of Commerce [and] other business entities to constantly look at ways that we can find a solution to this.”

Another remedy, according to the mayor, would be to build more affordable housing with financial aid from Ottawa.

Driving around Fernie, one can count a large number of homes under construction, but only one upcoming project is intended for low-income households, and won’t be welcoming residents until May 2022.

Until then, time is still ticking for seasonal workers.

While Gaudreault waits to find a roof, he plans to continue to sleep in his car, but he can only do that until December.

If nothing happens by then, he says he will leave Fernie and quit his job at the ski resort.

“Every day is getting harder, so I’m thinking in a couple of weeks, it is going to be impossible to do.”