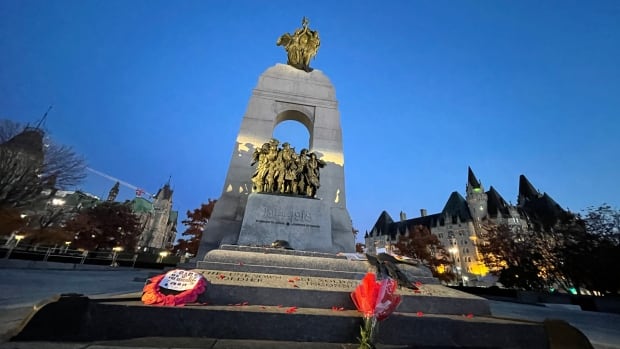 Canadians are expected to return to in-person Remembrance Day ceremonies, including at the National War Memorial in Ottawa, a year after the COVID-19 pandemic forced limited gatherings.

The annual ceremony in the country’s capital includes the playing of the Last Post, the ceremonial laying of wreaths at the foot of the memorial and a moment of silence followed by a 21-gun salute.

This year marks 100 years since Canada adopted the poppy as a symbol of remembrance.

You can also tune in to CBC Radio and the Listen app. Join Matt Galloway and Nil Köksal as they host the Remembrance Day ceremony in Ottawa, beginning at 10:55 a.m. ET.

Typically, tens of thousands of people attend the ceremony in Ottawa, but last year’s ceremony was limited to a much smaller crowd of 100 or so dignitaries, active service members, veterans and some members of the public.

Royal Canadian Legion spokeswoman Nujma Bond is expecting a return to some semblance of normalcy with people being welcomed to attend.

Some restrictions and changes will nonetheless remain in place as COVID-19 continues to pose a threat, Bond said, with masks and physical distancing requirements in place for anyone planning to attend ceremonies.

The Legion has also again cancelled the traditional veterans’ parade in Ottawa, which has in the past seen elderly veterans from the Second World War and Korea march alongside counterparts from more recent conflicts and operations.

The ongoing pandemic also means that some older veterans were unable to attend the ceremony in Ottawa, including 97-year-old Jack Commerford.

A Second World War veteran, Commerford was one of the thousands of Canadians who landed on Juno Beach during the battle of Normandy.

Watching from his home in Ottawa, Commerford said he felt “badly” for not being able to attend in person this year, but would like to attend in 2022.

“I do hope that next year the restrictions will be lifted,” Commerford told CBC’s chief political correspondent Rosemary Barton.

Some Legion branches across the country will also be again forgoing in-person events because of the pandemic and instead asking people to watch their local ceremony on TV or online.

The cold and rainy weather hasn’t stopped people from lining the streets for the Remembrance Day ceremony at the National War Memorial in downtown St. John’s.<a href=”https://twitter.com/CBCNL?ref_src=twsrc%5Etfw”>@CBCNL</a> <a href=”https://t.co/lczJjHDF3Y”>pic.twitter.com/lczJjHDF3Y</a>

In Newfoundland and Labrador, large gatherings remained limited by the pandemic. But some in St. John’s made their way to the war memorial downtown and lined the streets to remember the fallen.

The usual Remembrance Day ceremony at the Charlottetown cenotaph was also limited to military representatives and local politicians as the ceremony was again not open to the public this year.

Prime Minister Justin Trudeau released a video statement prior to the ceremony in Ottawa, where he spoke of those who were injured or died in the line of duty.

“We owe so much to those who bravely serve, to our veterans, to the fallen and to the families who love and support them,” he said.

Conservative Leader Erin O’Toole released a statement saying Remembrance day is an opportunity to thank those who serve in the armed forces.

“Our veterans and those serving today represent the very best of what it means to be Canadian. Their selflessness and courage serve as an inspiration to all of us,” O’Toole said in his statement.

NDP Leader Jagmeet Singh will attend a local ceremony in his B.C. riding of Burnaby.

“We remember those who lost their lives in the line of duty, and those who were forever changed by their experiences,” he said in a statement.