Should I wear a mask outdoors? Your COVID-19 questions answered 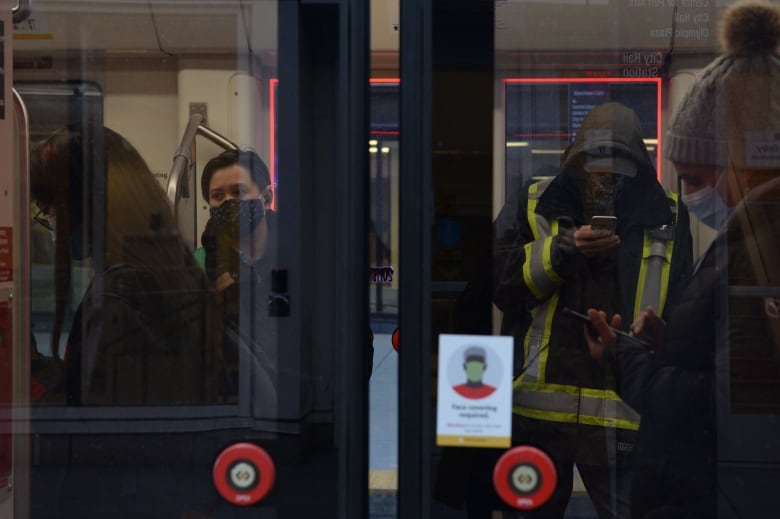 We’re answering your questions about the pandemic. Send yours to COVID@cbc.ca, and we’ll answer as many as we can. We publish a selection of answers online and also put some questions to the experts during The National and on CBC News Network. So far, we’ve received more than 65,000 emails from all corners of the country.

Should I be wearing a mask outdoors?

It depends on the circumstances. Federal public health officials recommend wearing a non-medical mask or face covering when:

So if your circumstances meet any of these conditions — whether indoors or out — you should probably be wearing a mask.

However, if you’re doing something like walking in a quiet neighbourhood then the risk of transmission is very low, said Dr. Zain Chagla, an infectious diseases physician at St. Joseph’s Healthcare Hamilton and an associate professor at McMaster University.

If you are going in and out of stores, or getting on and off transit while doing errands, it is best to just keep your mask on the whole time, to minimize touching it and potential contamination, Chagla advised in December.

And If you’re interacting with others outside you should wear your mask, while also staying two-metres apart, Chagla said.

The rapid spread of more contagious coronavirus variants across the country has led people in some hard-hit regions to question whether national public health guidelines go far enough to protect Canadians.

The concern is that people could be at risk of getting the virus from very little exposure to it.

Public Health Ontario (PHO), an arm’s-length, provincial government agency, recently told health units across the province they should reduce their thresholds for classifying all COVID-19 exposures given the emergence of variants.

If a person infected with COVID-19 and a contact are both wearing masks, but the contact isn’t wearing eye protection, PHO said they should be considered “high-risk” if they were within two metres for at least 15 minutes.

If neither of them is wearing a mask or eye protection — PHO said any amount of exposure time is risky, aside from briefly passing by each other.

In York Region, just north of Toronto, public health officials made headlines after releasing startling new information on individuals infected with the variant first identified in the United Kingdom.

“Some of these people who caught it were just doing essential visits and not for very much time, just a minute or two,” he said in a statement to CBC News.

As for mask-wearing tips, if you’re wearing a high-quality mask that fits well, then air will go through the material, rather than escaping out the sides. A properly fitted mask will expand and collapse with each breath.

B.C. Provincial Health Officer Dr. Bonnie Henry told CBC News there have been several cases of outdoor transmission between spectators “clustering and talking with each other” during soccer games and wedding receptions where people gathered under tents, but not from brief outdoor encounters.

However, Dr. Vera Etches, Ottawa’s medical officer of health, suggested that with infection rates climbing, residents in the capital should wear masks outdoors at all times.

“People should wear masks when they’re outside of their house as much as possible,” Etches said in a recent CBC Radio interview. “It’s an added barrier. You don’t know if you’re going to come into close contact with someone or not.”

“Outdoors is much safer than indoors, but if you are right beside someone, you could breathe in their respiratory secretions,” she said. “We’re in a situation now where we need to have stronger protections.”

Places such as San Francisco and New Brunswick have mandated outdoor mask use, and Toronto recently made wearing face masks for outdoor activities such as skating mandatory.

I’ve had Bell’s palsy. Should I get the COVID-19 vaccine?

We’ve been hearing from a number of Canadians who have experienced Bell’s palsy, which causes a temporary weakness or paralysis in muscles in the face, and they’re wondering if it’s OK to get vaccinated.

First, it’s important to note that it is always best to talk to your doctor when making important decisions about your health, including weighing the benefits and potential risks of receiving any vaccine.

Generally, it should be fine for people who have had Bell’s palsy to get vaccinated, said Dr. Michael Hill, a neurologist and professor in the department of clinical neuroscience at the University of Calgary’s medical school.

However, some people might get Bell’s palsy after having a viral infection such as COVID-19, he said.

Health Canada collects information on adverse events after immunization, from a variety of sources. Of the more than 600,000 doses administered as of Jan. 15, there were 90 adverse reports — only 0.015 per cent of all doses administered. Of those, 27, or 0.004 per cent of the total, were considered serious. It didn’t have any Bell’s palsy specific data.

“The benefits of vaccines authorized in Canada continue to outweigh the risks,” according to Health Canada’s website.

Internationally, Bell’s palsy was reported after vaccination in a very small number of participants in the Pfizer-BioNTech and Moderna trials.

Pfizer reported six cases of Bell’s palsy, including four in the vaccine group, which it said was a rate typical of the general population.

“From what I understand, [experts] say that that incidence is on par with the normal population and therefore isn’t considered to be statistically significant,” Pfizer Canada’s president Cole Pinnow told CBC News.

Pfizer continues to collect safety information and submit regular updates to Health Canada, it said in a February statement.

Moderna reported four cases in its trials, including three among people who had the vaccine and one in the placebo group. The company said that three of the cases had resolved themselves.

The U.S. Food and Drug Administration has not concluded that these cases were caused by vaccination, and the U.S. Centers for Disease Control and Prevention (CDC) is advising people who previously had Bell’s palsy that they “may receive an mRNA COVID-19 vaccine.”

It is possible that vaccines can cause side-effects like Bell’s palsy “in very rare instances,” Matthew Miller, an associate professor of infectious diseases and immunology at McMaster University in Hamilton, Ont. said in a CBC News interview in January.

But, there’s likely a greater chance of getting those side-effects from COVID-19 than from the vaccine, Miller said.

You can read more about that here.