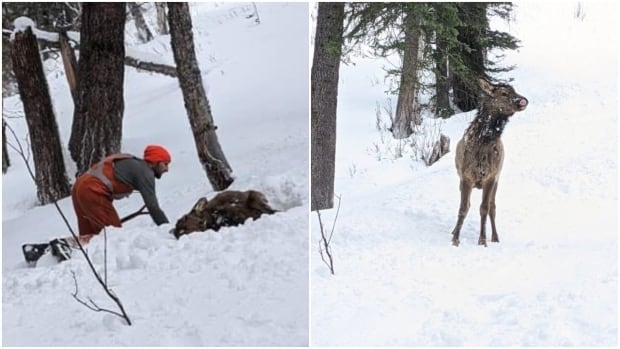 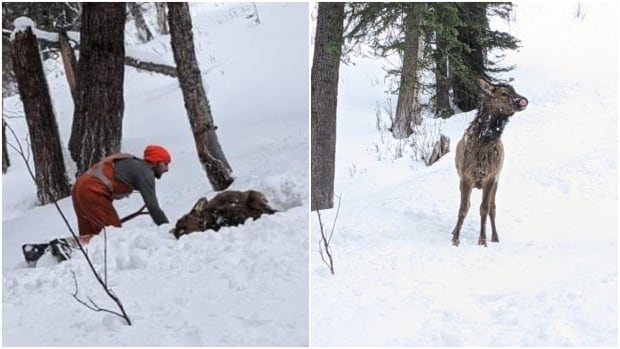 A lucky elk will live to see another day thanks to a B.C. man who saw the animal become buried in an avalanche, and happened to be in the right place at the right time to dig it out.

On Feb. 3, Jesse Dahlberg was watching railroad crews use explosives to trigger avalanches near Field, a town in southeastern B.C.

Five minutes before one of the explosions on Mount Dennis, he spotted an elk standing right where the snow was likely to slide. Soon, a billowing wall of snow came barrelling down the slope toward the elk.

“I didn’t know how big the avalanche was going to be so I was hoping for the best, and when I saw it … I thought there’s no way that elk is going to survive,” said Dahlberg.

“That wall of snow caught up to that elk so fast and just blasted it.”

Dahlberg, 32, who lives in Golden, is familiar with the area and drove over with a friend to check on the elk.

He found a trail leading up to the debris and spotted something out of the corner of his eye: a set of nostrils, an eye and a piece of fur poking out of the snow.

“I could tell it was alive,” he said. “It was looking at me, I could see its nose moving. It couldn’t move, it was in that snow like concrete.

“It was alive and I wanted to save it.”

Dahlberg started digging with his hands and called to his friend to bring a shovel.

He managed to free the animal’s hind quarters, moving quickly but carefully in an attempt to keep the elk calm. Within about 15 minutes, enough snow was cleared that he gave it a shove, and it stumbled out of the snow.

It walked about a metre away and stood, staring at Dahlberg. As he and his friend turned to leave, the elk watched as the pair walked away.

According to Avalanche Canada, the survival rate for humans fully buried in an avalanche is around 90 per cent — as long as the victim is found within 18 minutes.

The chance of survival falls quickly past that point, reaching just 30 per cent for victims buried up to 40 minutes.

The chances of someone spotting and rescuing an elk within 15 minutes? Likely much slimmer.

Dahlberg said he was thrilled the animal survived, considering how deadly avalanches can be.

“I put my arms up and started cheering because I was so excited that it was alive. The whole time I didn’t know if its back was broken or its legs were broken,” he said.