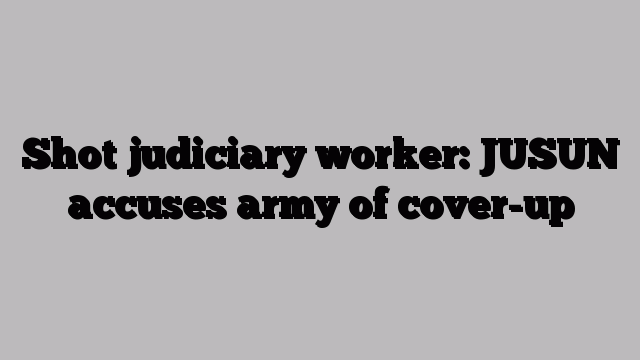 The Judiciary Staff Union of Nigeria says the Nigerian Army is attempting to hinder an independent investigation and possible prosecution of a soldier of the 6 Battalion, Seargent Usman Tella.

Tella shot a driver, who is a member of the union, Mr. Godwin Udoaka, on May 10, 2017 at Asutan Street, Uyo, Akwa Ibom, because Udoaka did not give a Toyota vehicle of Wizzchino Engineering Limited the right of way; even as the soldier was  accused of driving against the traffic.

The chairman of the union in Akwa Ibom State, Mr. Mbebe Albert, said the union would get justice for Udoaka.

Albert revealed that the police had written to the army to hand over the soldier to the police.

“The army, however, wrote a letter back to the police, telling them that they (the army) have the power to try the soldier.

“You cannot be a judge in your own matter. All over the world, the police are the recognised statutory body that carry out investigation and prosecution of any erring person.

“The army has to handover the soldier to the police first for investigation and prosecution.

“The army has asked us for negotiated settlement; this can’t be possible if they do not handover the soldier first to the police,” he said.

The Assistant Director, 2 Brigade, Nigerian Army Public Relations, Captain Umar Shuaib, however, insisted that the soldier could not be tried in two courts at the same time. He added that Tella is being tried by the army.

He said, “The soldier is under investigation under the Armed Forces Act.

“Let us allow the (military) board of inquiry to do its job – if the soldier is found guilty, he will be punished. You cannot take somebody to two courts at the same time.”

Our correspondent, who visited Udoaka, observed that he had been moved from Emergency Ward to another unit of the hospital.

It was gathered that Udoaka is still breathing through his mouth 15 days after being admitted into the University of Uyo Teaching Hospital, Uyo, Akwa Ibom State.