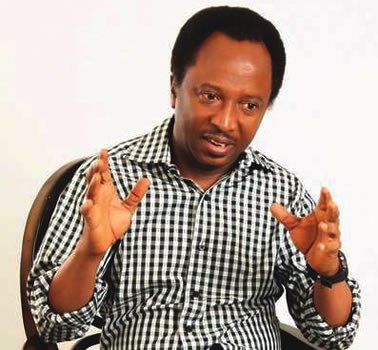 The senator representing Kaduna-Central senatorial district, Shehu Sani, says the refusal of former President Olusegun Obasanjo to recognise and honour the acclaimed winner of the June 12, 1993 presidential election, the late MKO Abiola, is a reflection of Nigeria’s institutional failure.

Sani noted that when Nigeria finally attained democratic rule in 1999, none of those who suffered in the hands of the military while struggling to entrench democracy in the country got any political position.

He said it was, therefore, not surprising that the present crop of democrats in the country, who did not sacrifice anything for the nation’s democracy, were only interested in amassing wealth for themselves at the expense of the masses.

Sani delivered a keynote address on Monday at the 2017 National Breakfast Prayers and Tribute Session in honour of Abiola.

The event with the theme, “June 12 movement and the hope of equitable restructuring for Nigeria,” was also to commemorate the 24th anniversary of June 12, 1993 and it held at the late Abiola’s house in Ikeja, Lagos.

Sani argued that despite the Federal Government’s failure to honour the late Abiola, the June 12, 1993 presidential election that the late businessman won, but which the military junta of General Ibrahim Babangida annulled, laid the foundation for the current democratic rule in the country.

He said, “Without the struggle of June 12, there could not have been democracy in Nigeria today. The change and the experience in the 2015 election was part of the seed of June 12, it was the same forces that forced the military out power that rallied Nigerians to eject the PDP out of power.”

He said Obansanjo’s failure to honour the late Abiola reflected the effort of the political class to suppress the sacrifice of those who went to jail and those who paid the supreme price for the democracy that Nigeria has today.

Sani said, “It is not simply about Chief MKO Abiola not being recongnised by Chief Olusegun Obasanjo, it is about an institutional decision of the political class, who continues to suppress the role played by the free press bringing about democracy…17 years down democratic lane, hardly will you see any of those that were on the streets of Lagos protesting for democracy ever being recognised with even an award of OON, which is the lowest. As they share oil blocks to themselves, share positions to themselves, so they share national honour to themselves.”

Also speaking, a former Speaker of the Lagos State House of Assembly, Adeyemi Ikuforiji, said had the late Abiola been allowed to enjoy the mandate given to him by Nigerians, there might not have been the different sectional agitations in the country.

Ikuforiji said, “The man who paid the supreme sacrifice, he had nothing to do with poverty as of the time he put down his life for Nigeria; our then President-elect had made many Nigerians from all walks of life millionaires on his own. He had contributed to the growth of many communities across Nigeria and it had nothing to do with tribe or religion.

Speaking at the late Abiola’s graveside, popular poet, Odia Ofeimum, said ‘all the problems that made the annulment of the June 12, 1993 presidential election possible are still with us’.

Also speaking at a June 12 anniversary event organised by the Oodua People Congress and chaired by a former Governor of Abia State, Chief Uzor Kalu, OPC leader, Gani Adams, lamented that those who benefitted most from Abiola’s martyrdom, did not want to remember his memories today.

The OPC leader regretted the protest that greeted the renaming of the University of Lagos after Abiola by ex-President Goodluck Jonathan’s administration.

Also speaking, Kalu said the country’s Democracy Day should be June 12 and not May 29, adding that May 29 was wrongly chosen because those who did not participate in the struggle for democracy chose it.

The guest speaker at the OPC event and a lecturer in the Department of Philosophy, University of Lagos, Dr. Chiedozie Okoro, who spoke on the topic, ‘MKO: A symbol of freedom in the history of Nigerian democracy’, said the annulment of the June 12 election brutally raped the downtrodden of the hope for a new dawn of freedom.

“But freedom denied is freedom delayed. True, when a messiah or hero is cut down, the flock (the people) are in disarray, only for some period. Time heals all wounds. It does not take long for the people to regroup,’’ the lecturer said.

He further called for the restructuring of the country along political and economic lines, taking into cognisance the country’s ethnic and religious differences.

“Lastly, in the pursuit of the restructuring of Nigeria, violence of any kind must be avoided.’’      Copyright PUNCH.
All rights reserved. This material, and other digital content on this website, may not be reproduced, published, broadcast, rewritten or redistributed in whole or in part without prior express written permission from PUNCH.