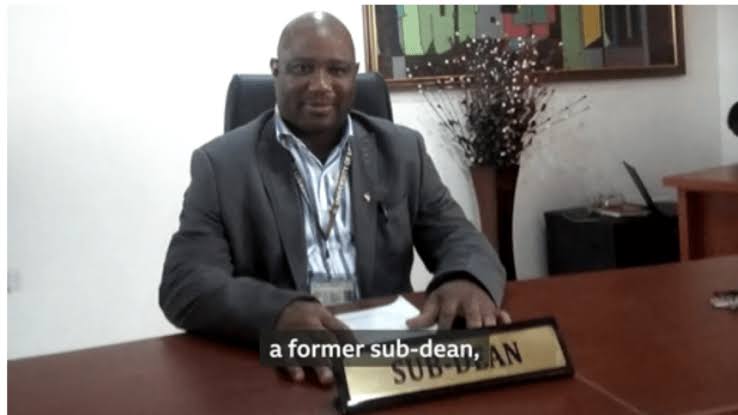 A senior lecturer known as Dr Boniface Igbeneghu from the faculty of Arts, a former sub – dean in the University of Lagos (UNILAG) and the head of a local Foursquare Gospel Church has been caught harassing a female student sexually, promising good grades in return. This truth came to bare after 9 months of interviews with current and former students.

The secret investigation took more than a year by BBC, which has been secretly filming the University of Lagos and that of Ghana. In UNILAG, Dr Boniface was caught on camera telling his victim to ”Switch off the light, lock the door and I’ll kiss you for one minute”

Several students had alleged that they have been harassed by Dr Boniface, which made BBC send an undercover journalist to him, posing as a 17-year-old secondary school graduate seeking admission, of which he fell like a pack of cards.

However, in Ghana, Dr Paul Kwame Butako from the College of Education was the culprit discovered after female students pointed him out in a series of interviews. An undercover journalist who posed as a final year student, interested in doing masters was then sent to him and he also did not escape same fate that befell his colleague in Lagos.

Watch the video and see some reactions, as this isn’t the first time, cases like this will be coming up.

UNILAG and NUC must use this guy as an example to stop other lecturers from harassing women.

This also happened to one of my female friends this year#SexForGrades pic.twitter.com/GOPx2P0sfd

“Switch off the lights

And kiss me for a minute

Let’s have a cold room experience”

I am happy about this #SexForGrades hashtag. I have been getting complaints about a certain HOD of a dept in UNIBEN who slept with a girl till she got 2.1, she had average grades then suddenly..

Dr. Adebimpe Raheem and Prof. Lanre Ajibade are lecturers of Geography dept, in the University of Ilorin,Ilorin Kwara State, they sleep with students in exchange for good grades, they threaten we girls with extra year. They have slept with 100s of girls. #bbcnews #SexForGrades pic.twitter.com/b5pusAjYuS

Dr. Adebimpe Raheem and Prof. Lanre Ajibade are lecturers of Geography dept, in the University of Ilorin,Ilorin Kwara State, they sleep with students in exchange for good grades, they threaten we girls with extra year. They have slept with 100s of girls. #bbcnews #SexForGrades pic.twitter.com/b5pusAjYuS

After these lecturers are exposed, what next, will truth be swept under the carpet with evidences like this or will justice prevail to liberate victims and reduce to barest future occurrences? let’s keep our fingers crossed as the events unfold.