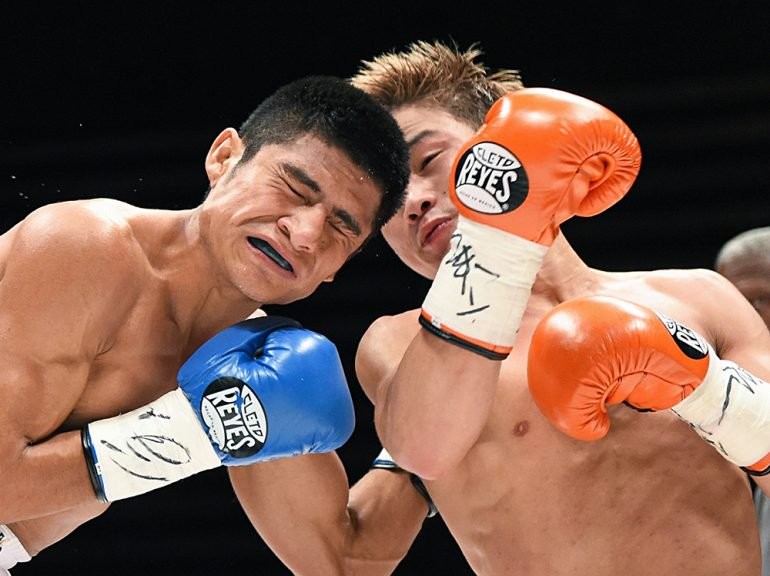 Rafael’s remarks: In just his sixth professional fight, Kyoguchi, 23, of Japan, won the Asian OPBF regional title and in his eighth fight ascended to a 105-pound world title by outpointing Argumedo, 28, of Mexico, who was making his fourth defense. Argumedo was returning to Japan, where he had won his world title against Katsunari Takayama in 2015, and this time was on the wrong end of the decision. It was a messy fight in which there was a lot of clinching and slipping to the mat, not to mention so many wild, missed punches, but Kyoguchi did enough to impress the judges. He also scored the only knockdown of the fight, dropping Argumedo with a left hand in the ninth round. Kyoguchi’s boxing idol is Joichiro Tatsuyoshi and he followed in his footsteps. In 1991 Tatsuyoshi won a bantamweight world title in his eighth fight.

Rafael’s remarks: Taguchi, 30, of Japan, retained his 108-pound world title for the sixth time as he stopped mandatory challenger Barrera, 24, of Colombia, who had his six-fight winning streak come to an end. Taguchi, coming off a draw in a December defense against Carlos Canizales, battered Barrera throughout the fight. He took it to Barrera with a consistent body attack and had him on the brink of going down in the seventh round. Barrera tried to hold on for dear life in the eighth round and was given a warning by referee Russell Mora, but the end was near. Taguchi, who was ahead 78-74 on all three scorecards going into the ninth round, tore into Barrera, prompting Mora to step in and stop the contest at 24 seconds. Taguchi’s goal now is to unify belts, and his first target is countryman Kosei Tanaka.

Also on the card, former junior bantamweight world titleholder Kohei Kono (33-10-1, 14 KOs), 36, of Japan, who was coming off back-to-back world title fight losses to Luis Concepcion and Naoya Inoue in 2016, returned to action and dropped Thailand’s Rambo Gorat Sports School (13-10-1, 3 KOs), 23, twice en route to a knockout at 1 minute, 35 seconds of the fifth round.

Rafael’s remarks: Former bantamweight and featherweight world titleholder Gonzalez, 35, of Mexico, won his sixth fight in a row (fifth in a row by knockout) as he blew out Rosales, 25, of the Philippines, to hand him his first defeat. Gonzalez has always been a great puncher and he still is, showing off his power in the second round. He landed a sharp left hook that sent Rosales sprawling to the mat on his backside. Rosales was clearly hurt but beat the count. Later in the round he was down again for good as Gonzalez lashed him with a brutal left hook to the liver. He went down in agony and referee Cesar Castanon counted him out just as the round was coming to an end. Rosales remained down for a few minutes. If Gonzalez has his way he will soon challenge 130-pound world titleholder Miguel Berchelt in an all-Mexican showdown that would surely be action-packed.

Also on the card, a pair of 2016 Mexican Olympians signed to Richard Schaefer’s Ringstar Sports scored early knockouts. Middleweight Misael Rodriguez (2-0, 1 KO), 23, who claimed a bronze medal at the Rio Games last summer, handed a seventh consecutive loss to Jose David Mosquera (16-10-1, 14 KOs), 33, of Colombia, whom he knocked out at 1 minute, 50 seconds of the second round, and junior welterweight Lindolfo Delgado (2-0, 2 KOs), 22, drilled countryman Gerson Escobar (2-3, 1 KO) in the first round.

Rafael’s remarks: In April 2016, Serrano, 28, a Puerto Rico native fighting out of Brooklyn, New York, knocked out Kiss in the fourth round of an eight-round nontitle fight. They met in a rematch, this time for Serrano’s women’s 122-pound world title and she got Kiss, 27, of Hungary, out of there even more quickly, sending her to her second loss in a row and third defeat in her past four bouts. Serrano, who has won world titles in five weight classes and retained her junior featherweight belt for the second time, dominated the fight. In the second round, a clean right hand awkwardly sent Kiss to the canvas, and Serrano continued to land punches in the third round. Although Kiss did not go down again, Serrano landed enough clean blows to rock her and force referee Jose Rivera to intervene at 1 minute.

Rafael’s remarks: In September 2015, Oquendo, 33, of Puerto Rico, outpointed former two-division world titleholder Jhonny Gonzalez in a big upset but three months later lost a clear unanimous decision to Jesus Cuellar in a featherweight world title bout. Fighting for the first time since that fight in December 2015, Oquendo dominated Rizo, a 32-year-old southpaw from Nicaragua, who took the fight on short notice when Francisco Fonseca withdrew because of the chance to fight in a world title eliminator. In the fifth round, Oquendo forced Rizo to the ropes and hammered him with a right-left-right combination that dropped him to his rear end and also messed up his right eye. Oquendo battered him for the rest of the round, after which he retired on his stool and referee Ramon Pena called off the fight one second into the sixth round. Considering the 19-month layoff, Oquendo turned in a pretty sharp performance as he handed Rizo his fifth loss in a row, four of which came by knockout.

Rafael’s remarks: Cintron, 22, the only two-time Olympic boxer (2016 and 2012) from Puerto Rico, turned pro in April in Kissimmee, Florida, and had his first pro bout at home as he rolled past Dejeas, 38, of Chile, who lost his third fight in a row. Cintron, who is signed to Top Rank and trained by former strawweight and junior flyweight world titleholder Ivan Calderon, easily outboxed Dejeas in the opening round and then began to open up on offense. In the second round, he blitzed Dejeas with a slew of shots, who went down to his knees from the accumulation of blows. He appeared to be waiting for referee Jose Rivera to reach 10, and when he did at 2 minutes, 21 seconds, Dejeas stood up. Easy work for Cintron, who is a good looking prospect.

Rafael’s remarks: Brazil’s Conceicao, 28, who won a 2016 Olympic gold medal in front of the home crowd in Rio de Janeiro and then signed with Top Rank, plowed through Gomez with ease. From the opening bell, Conceicao let his hands fly and pummeled Gomez. He eventually drove him into the ropes and let a sustained flurry of punches go, including a hard right hand to the solar plexus that sent poor Gomez to the canvas, where he was writhing in pain as he was counted out at 52 seconds. Gomez, 27, of Mexico, who lost his second fight in a row by knockout inside two rounds, was down for a couple of minutes.

Rafael’s remarks: Moran, of Mexico, was initially scheduled to fight Wilberth Armando Lopez in the Telemundo-televised main event, but Lopez dropped out and was replaced on a few days’ notice by Rosales, 35, of Mexico, who gave a good effort. However, it was not good enough as Moran mostly dominated. Late in the second round, Moran clobbered Rosales with a series of punishing shots and finally dropped him to a knee with a right hand and continued to batter him in the final seconds of the round. He kept up the attack and in the sixth round landed two hellacious right hands that badly hurt Rosales. Moran continued to pound him until he went down again, and the referee called off the fight at 2 minutes, 16 seconds as Rosales lost for the second time in his past three bouts.